Palestinians criticized the Fatah parliamentary bloc’s participation in the Iranian opposition conference held recently in Paris, and considered it to be interference in Iran’s internal affairs. 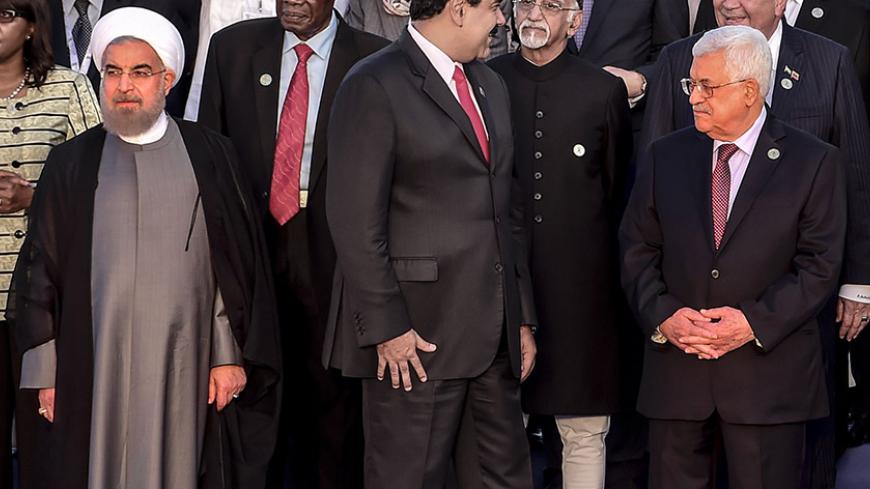 RAMALLAH, West Bank — A Palestinian parliamentary delegation from the Fatah movement participated July 1 in the annual Iranian opposition conference for the People's Mujahedeen Organization of Iran, or Mujahedeen-e-Khalq (MEK), in Paris. During the conference, member of parliament Najat al-Astal delivered a speech in which she stressed “supporting the struggle of the Iranian opposition for freedom, democracy and human rights, as well as eliminating the mullahs’ regime in Iran and replacing it with a free democratic regime that will bring justice to the Iranian people.”

The stance the Palestinian Authority (PA) and Fatah have taken against the Iranian regime stems from two main points. First, they accuse Iran of supporting Hamas financially and militarily and encouraging its military takeover of the Gaza Strip in 2007. Second, Fatah and the PA coordinate with Arab countries that have expressed hostility toward Iran, namely Saudi Arabia.

Astal added, “The Iranian regime has financially supported Palestinian division in order to strong-arm the Palestinian leadership. We will prevent this regime from reaching the level of control it dreams of imposing on the Arab region while it supports extremist groups in Syria, Iraq, Bahrain and Palestine,” in reference to Iran’s support for Hamas.

Meanwhile, the Palestinian participation in the Paris conference will add more fuel to the fire of the troubled relations between the PA and Iran, as it represents a new link in the rapprochement with the Saudi-backed Iranian opposition. This rapprochement culminated in a meeting between President Mahmoud Abbas and head of the Iranian opposition Maryam Rajavi in Paris on July 30, 2016.

Walid Assaf, a member of parliament and member of Fatah’s Revolutionary Council who was authorized to give a speech at the conference but could not make it to Paris after his trip was delayed, told Al-Monitor, “The Palestinian delegation participated in the conference with the formal approval of the Fatah parliamentary bloc, given the nature of the strong relationship with the MEK.” This indicates Abbas, the head of Fatah, approved the participation.

The Palestinian participation in the Iranian opposition conference comes in light of political changes in the region led by Saudi Arabia against Iran and its allies. This is one of the reasons behind Saudi Arabia’s dispute with Qatar, which makes the PA keen on keeping Iran at an arm’s length and strengthening its relations with Saudi Arabia and the allies of the alliance it leads in the region, which includes the Iranian opposition.

Assaf added, "We support any Arab position that defends the stability of the Arab world and is against interfering in its internal affairs. We have recently witnessed an Iranian intervention in the region that caused sectarian wars. When Iran stops interfering with our internal affairs, we will have closer ties with it. As long as it supports the legitimate Palestinian [government], we are more than ready to build strong relations with Tehran.”

However, some Fatah members criticized the Palestinian participation in the conference. Abbas Zaki, a member of Fatah’s Central Committee, expressed his disapproval of the participation, saying, “This is outrageous and Fatah has nothing to do with this uncalculated step. It was a parliamentary delegation.”

Zaki told Al-Monitor, “Attending the Paris conference and delivering a speech against the Iranian regime is a blind political move that could harm our cause, because Iran has never hesitated to support Palestine since 1979.” He noted that the Palestinians must not be dragged into the Arab and Israeli incitement against Iran, adding, “We must ensure the independence of Palestinian decision-making. We should not be influenced by the decision of this or that country.”

Palestinians and Iranians have had an on-again, off-again relationship over the past couple of years. The PA sought to improve relations with Iran following the nuclear agreement reached on July 14, 2015. In this context, Ahmad Majdalani, a member of the PLO Executive Committee, visited Tehran on Aug. 9, 2015, to start a political dialogue with the aim of developing bilateral relations.

However, the relationship shifted in 2016. On Feb. 24, 2016, Iran announced its intention to provide financial support to the families of what are termed Palestinian martyrs directly, without going through the PA, which considered this move to be Iranian interference in Palestinian internal affairs. In the months that followed, both sides exchanged harsh words, particularly against the backdrop of the meeting between Abbas and Rajavi.

Majdalani, who is responsible for the Palestinian-Iranian relations dossier, told Al-Monitor, “I visited Iran two years ago and made efforts to develop our relations, but the Iranian regime has not taken a single step toward us to improve our bilateral relations.”

He added, “My efforts failed to achieve any breakthrough in our relationship with Iran. On the contrary, every once in a while Iranians make speeches inciting against the Palestinian leadership, which is unacceptable and unjustified.”

“The relationship with Iran is minimal. Despite the existence of a Palestinian Embassy in Iran, we cannot claim to have any political or economic relations,” Majdalani said, noting that there were no positive signs that could change the relationship.

Abdul-Sattar Qassem, a professor of political science at An-Najah University in Nablus, described the participation of the Palestinian delegation in the Iranian opposition conference as “sins.”

Qassem told Al-Monitor, “We are not supposed to interfere in anyone's affairs because our intervention means our involvement. What good would it do us to incite the MEK against Iran?”

In light of the PA’s adherence to Saudi positions on most of the region's issues and the political and financial support it receives from Riyadh on the one hand and the support Iran provides to resistance factions, especially Hamas and Islamic Jihad on the other, the relations between Iran and the PA continue to deteriorate, with no sign of the slightest improvement.