The Islamic Jihad announced it will not participate in the upcoming elections under the political auspices of the Oslo Accord, claiming the decision has nothing to do with Iran. 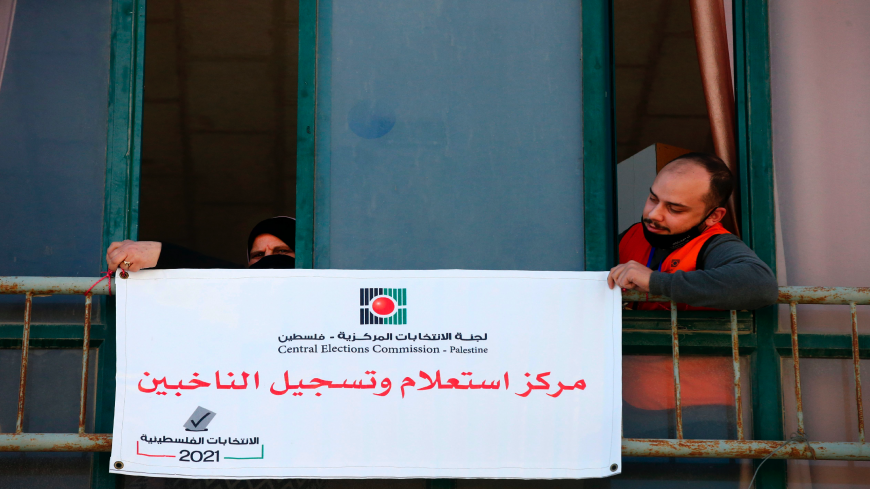 Members of the Palestinian Central Elections Commission hang a sign reading in Arabic "Voter Information and Registration Center" in the West Bank town of Hebron on Feb. 10, 2021. - HAZEM BADER/AFP via Getty Images)

The Palestinian Islamic Jihad movement announced in a Feb. 9 statement that it would boycott the upcoming Palestinian general elections.

“The movement has decided not to take part in the elections held in accordance with the Oslo Accord. We believe the right path toward national unity is through an agreement on a political program that cements people’s resilience, protects their resistance and rearranges the Palestinian Liberation Organization (PLO) by holding elections for the Palestinian National Council (PNC), separate from the Palestinian Legislative Council (PLC).”

The Palestinian Islamic Jihad movement, formed in 1981, is not a member of the PLO and does not participate in the Hamas-run government in Gaza. It claims an estimated 8,000 members and receives funding from Iran. While mostly aligned with Hamas, it takes a more aggressively militant stance, and is also more inclined to initiate attacks on Israel.

The Islamic Jihad considers the presidency and the PLC to be a product of the 1993 Oslo Accord, which the movement opposes. The Oslo Accord provides for the establishment of a Palestinian self-governing authority on the one hand and the election of a PLC and president for the Palestinian people on the other.

The Islamic Jihad’s announcement came after the main Palestinian factions held talks in Cairo on Feb. 8-9 to discuss the elections.

The Islamic Jihad’s boycott of elections is not the first. The movement also boycotted the PLC elections in 1996 and 2006 under the same pretext that the elections are taking place under the auspices of the Oslo Accord.

Hassan Lafi, a political analyst and writer, told Al-Monitor, “The Islamic Jihad held several internal and national discussions with grassroots to reach this decision. The movement only talked about boycotting the legislative and presidential elections and kept the door open to participating in the elections of the PNC, which includes Palestinians at home and abroad, as a parliament that represents all Palestinian people.”

In a statement to al-Quds radio on Feb. 10, Nafez Azzam, a member of the Islamic Jihad’s politburo, asserted that boycotting the elections is in line with the movement’s stances and its political program that refuses the Oslo Accord. But he said they would not put spokes in the wheels of holding the elections.

The Islamic Jihad is the only key Palestinian party to boycott the legislative elections for three consecutive rounds. Fatah participated in all the rounds, while Hamas boycotted the first round in 1996 and participated in the second in 2006, in addition to announcing its participation in the third round this year.

Islamic Jihad leader Ahmad al-Mudallal told Al-Monitor, “In its boycott of the legislative elections, the movement wants to highlight the elections of the PNC and pave the way to reforming the PLO. We are still living in a phase of national liberation, and the political climate of the 1996 and 2006 elections has not changed. Our boycott decision does not affect our relations with the other factions, especially with Hamas, as we agree with it on the resistance and we share a high level of coordination."

He added, “Our decision to boycott the elections is driven by purely national Palestinian motives that have nothing to do with Iran. Our ties with Iran are based on a shared strategic ideology against the Zionist enemy (Israel), and it is our main supporter logistically, financially and politically. But our decisions come from our ideological roots, and we will not be in anyone’s pocket.”

Notably, on Feb. 6, an Islamic Jihad delegation led by its secretary, Ziad Nakhale, visited the Iranian Embassy in Moscow alongside a Hamas delegation. Iranian Ambassador Kazem Jalali and his deputy, Hussein Maliki, received them. They discussed the developments in the Palestinian arena, the elections, overcoming the Palestinian rift and supporting Iran’s stance toward the Palestinian resistance.

The Islamic Jihad’s boycott of the elections was met with various reactions in the Palestinian arena. In statements to al-Aqsa satellite channel on Feb. 11, Hamas’ deputy chief Saleh al-Arouri asserted that despite boycotting the elections, the Islamic Jihad did not leave the national dialogue table. He noted that the two movements continue to share an understanding of resistance and politics.

Hassan Khraishe, deputy speaker of the PLC, told Arabi 21 newspaper on Feb. 11 that the stance of the Islamic Jihad is normal given that it did not participate in the previous election rounds.

Former Palestinian Minister of Culture Ibrahim Abrash said in a statement to Dunia al-Watan website on Feb. 13 that the Islamic Jihad’s stance would be stronger if Hamas and other factions followed suit. But if elections are held on time and different factions participate, the Islamic Jihad will face several challenges.

Hussam al-Dujni, professor of political science at Umma University in Gaza, told Al-Monitor, “The Palestinian social elites called on the Islamic Jihad to participate in the elections. But influential circles inside the movement pressured it in the direction of boycott out of fear of repeating the failure of other factions in the PLC and of internal polarization between Fatah and Hamas, which would lead to the Islamic Jihad not getting seats commensurate with its public popularity.”

A Palestinian factional source who took part in the Cairo talks told Al-Monitor that “the Islamic Jihad demanded the inclusion of a provision related to dissolving the Oslo Accord in the concluding statement. When its request was not met, it announced its decision to boycott the elections.”

Abdel Rahman Chehab, director of the Atlas of Israeli Studies Center in Gaza and a former prisoner who remained in Israeli prisons from 1988 to 2011 over his membership in the Islamic Jihad, said, “The Islamic Jihad could have refrained from officially boycotting the elections because its participation would give it stronger regional relations and would engage it in the Palestinian political decision-making. It can then boost its alliance with Iran. But its boycott does not mean it will completely end its participation in the electoral process. Although it will not nominate one of its leaders, it might direct its organizational bases to support Hamas.”

The Islamic Jihad circles justified their decision to boycott the elections by saying the elections are held under the "hegemony" of Abbas and they doubt the three phases will be completed. They said there are no guarantees that Hamas and Fatah will accept the results. Besides, the movement believes the elections did not stem from Palestinian willingness; rather, it came in response to European pressure and to the change in the US administration.