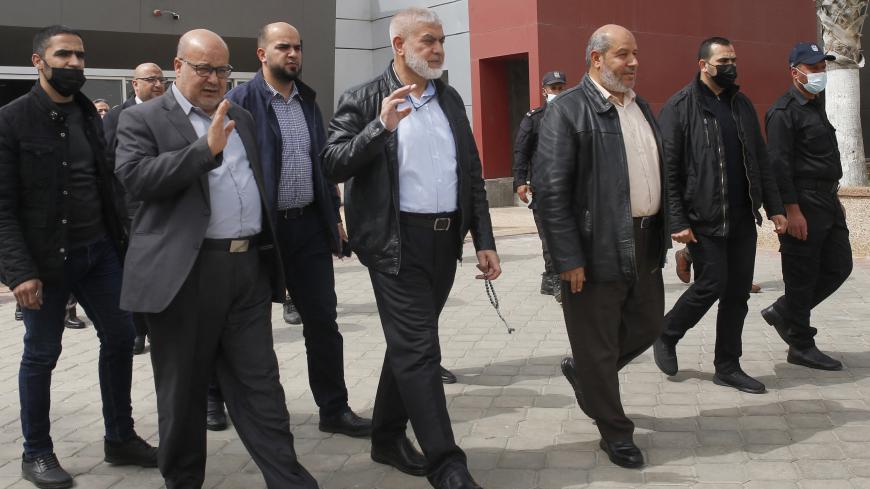 (Front row L to R) Hamas leaders Essam Aldalis, Rawhi Mushtaha, and Khalil Al-Hayya walk outside the VIP hall at the Rafah border crossing with Egypt in the southern Gaza Strip on March 15, 2021 as a delegation from Gaza travels to Egypt for talks with Fatah ahead of the Palestinian elections. - SAID KHATIB/AFP via Getty Images

GAZA CITY, Gaza Strip — Internal consultations continue to be held within the Palestinian Islamic Jihad on the Palestinian Legislative Council (PLC) elections scheduled for May, despite the group's announced boycott of the polls.

Islamic Jihad based its decision not to participate in the legislative elections over a failure to reach an agreement on a joint Palestinian political program at the Cairo meeting of the Palestinian factions on Feb. 7. The movement also refuses to be part of any institution — namely the PLC and the presidency — that are products of the Oslo Accords, which the movement opposes.

Still, the Islamic Jihad is encouraging its supporters to vote for particular electoral lists in the contest.

Mohammad al-Hindi, the head of Islamic Jihad’s political bureau, told Al-Monitor that the movement’s political leadership is still assessing whether voting in the elections is permissible.

Hindi said the Islamic Jihad will wait for the outcomes of the meeting of the Palestinian factions in Cairo scheduled for March 16 before it makes a final decision.

A source close to the Islamic Jihad leadership in Gaza revealed to Al-Monitor that the movement is also waiting for Hamas to complete its ongoing internal elections.

The source said there is a tendency within the Islamic Jihad to vote for Hamas' lists or those of Hamas' allies in the name of the resistance. The two movements have similar political and military orientations.

He pointed out that Hamas will support the figures that the Islamic Jihad runs for the Palestinian National Council (PNC) elections.

The Hamas movement has yet to make a final decision on the nature of its participation in the upcoming legislative elections, whether to run its own lists of Hamas figures or to join other factions on a joint list.

Taher al-Nunu, media adviser to the head of Hamas’ political bureau, told Turkey’s Anadolu Agency March 10 that Hamas is currently discussing the nature of its participation in the upcoming legislative elections, and pointed at “the possibility of forming an electoral list consisting of the Palestinian resistance factions.”

Hamas hopes a victory in the polls would push some countries to recognize the movement as a representative of the Palestinian people, rather than a terrorist group as the United States and Israel classify it.

Hassan Abdo, a political analyst for the Center for Palestine Research and Studies, told Al-Monitor that Islamic Jihad has a large voter base whose ballots would tip the balance in the upcoming legislative elections.

Abdo explained that the Islamic Jihad’s leadership is still considering its support for the electoral lists whose electoral program is based on the Palestinian resistance project, and added that a decision is expected very soon.

He noted that Islamic Jihad is waiting on the upcoming Cairo talks. Abdo anticipates that a political agreement will be accepted by all parties in Cairo, ensuring Islamic Jihad’s participation in the PNC elections and its support for lists in the legislative elections.

Khaled Sadeq, editor-in-chief of Istiqlal newspaper, which is close to the Islamic Jihad, told Al-Monitor he agreed with Abdo and said that multiple Palestinian factions and electoral lists are competing for Islamic Jihad votes.

Sadeq explained that Islamic Jihad will vote for the lists whose programs are based on the resistance, especially Hamas, whose relations with Islamic Jihad have improved in the past years.

Sadeq expressed hope that the Palestinian elections are held on time and that the internal differences plaguing Fatah do not delay them.

Many Palestinians fear that the upcoming legislative and presidential elections will be postponed or even canceled, particularly with Fatah leaders running in individual lists due to internal differences. Most recently, Fatah Central Committee member Nasser al-Qudwa announced he was running on an individual list separate from Fatah’s official list.

Palestinian PM's COVID-19 response gets high marks, but will it be enough?