Hamas leader Yahya Sinwar revealed details of a recent meeting between Hamas and Islamic Jihad to coordinate efforts to confront Israel and pursue the Palestinian cause. 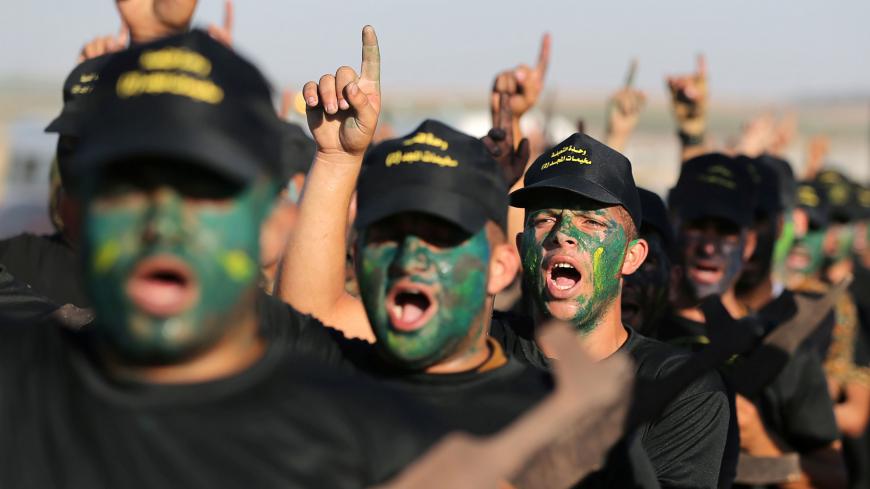 Young Palestinians have their faces painted as they chant slogans during a military-style graduation ceremony at a summer camp organized by Islamic Jihad, in Gaza City, Gaza Strip, July 4, 2019. - REUTERS/Ibraheem Abu Mustafa

GAZA CITY, Gaza Strip — The two main Palestinian factions in the Gaza Strip are growing closer, and they want the world to know.

Sinwar said the six-hour meeting focused on details of the factions' resistance project and included preparations to deter Israeli aggression and discussions about developing a national action plan, the marches of return and lifting the blockade by Israel.

Before making the announcement, Sinwar visited Rafah as part of a campaign launched by Hamas leaders dubbed the “Interaction Tour.” Hamas formed 40 delegations to visit 600 families in the Gaza Strip, to thank them for their role in promoting Palestinian national unity and supporting all forms of resistance. The first phase of the visits took place during the days preceding Eid al-Adha, on Aug. 11, and the second phase is happening now through January.

Islamic Jihad spokesman Daoud Chehab told Al-Monitor that the two movements are continuing to coordinate at the leadership and organizational levels. Their meetings aim to discuss developments on the ground and ways to jointly counter the risks surrounding the Palestinian cause.

“We are managing an open and difficult conflict with Israel, which is besieging us and fighting us however it can. We should be on full alert and work together while coordinating our stances and visions and offering a united struggle and militancy strategy," Chehab said.

According to Chehab, Sinwar revealed the meeting to show the world a new pattern of unity and coordination among Palestinian factions in the Gaza Strip. He noted that Hamas and Islamic Jihad relations are strong and developed, unlike the way they are potrayed by Israeli media. He noted that Islamic Jihad meets with all factions because confronting Israel unites them.

Hamas spokesman Hazem Qassem told Al-Monitor, “It's no secret that Hamas is holding continuous meetings with Islamic and Palestinian parties because they are working jointly at the political, security and military levels. Publicly, the Higher National Commission of the Great March of Return and Breaking the Siege is deploying efforts, while the joint operations chamber is working at the military level.”

In addition, the factions are seeking ways to develop national networks and boost people’s resilience in the Gaza Strip, he said. They have discussed "joint armed action between Hamas, Islamic Jihad and other factions and the possibility of developing it," Qassem said.

He denied any link between the meeting and recent violence in the Gaza Strip against the Israeli army, chalking up the incidents to individual operations.

He also said it is important for the Gaza factions to improve communications in the face of the "division that is ongoing with the Palestinian Authority in the West Bank.”

Hussam al-Dujni, a political science professor at Umma University in Gaza, told Al-Monitor that Sinwar’s statements align with those of Hassan Nasrallah, secretary-general of Lebanon's Shiite Islamist milita Hezbollah. Hezbollah has threatened Israel for years and supports the Palestinian resistance.

Hamas officials have been meeting with parties of the axis of resistance, an alliance of Iran, Syria and Hezbollah against Israeli and Western influence in the region. Dujni said the meetings indicate joint and complete coordination among all parties.

"The meetings carry a political message to Israel that a new phase is looming, since the axis of resistance is stronger than ever in the face of Israel, and that the Gaza Strip, Syria and Iran will no longer be handled separately," Dujni said.

Hassan Abdo, a political analyst close to Islamic Jihad, told Al-Monitor that Sinwar made his public statement Aug. 14 after visiting a Gazan family that had lost many relatives who were Islamic Jihad members. In addition to expressing sympathy, Sinwar wanted to show how close and strong the two movements are, said Abdo, noting that Hamas also wants to improve its image locally.

“The factions have the same destiny, and therefore, they should work together,” he said.

Like Qassem, Abdo said he does not believe the meeting was called because of recent attacks against Israel, which were carried out by individuals, "reflecting only tensions and anger among Gaza’s youths."