After Israeli strikes killed two Islamic Jihad members in the Gaza Strip, the movement has come out accusing Israel of escalation, in what it says is an attempt to fuel intra-Palestinian conflict. 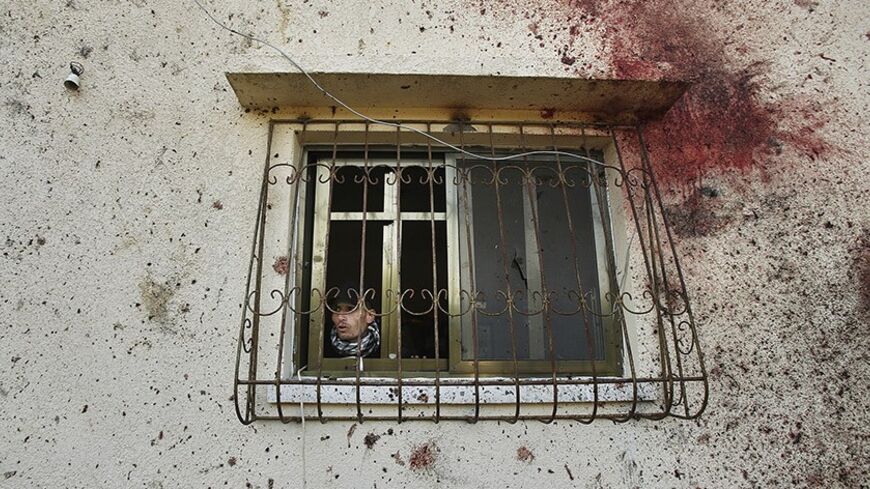 A Palestinian man looks out a window beside bloodstains on the wall of a house at the scene of an Israeli air strike in Beit Hanoun, northern Gaza Strip, Jan. 22, 2014. - REUTERS/Suhaib Salem

GAZA CITY, Gaza Strip — The United States has added the deputy secretary-general of Islamic Jihad, Ziyad al-Nakhalah, to the list of "terrorist organizations and individuals," according to a statement issued by the US State Department on Jan. 23.

The statement, published by the State Department on its website, said that Nakhalah was added on the terrorism list because he has stood behind attacks against Israel. The statement also noted his "strong relations with the Government of Iran, the world's primary State Sponsor of Terrorism."

The spokesman for Islamic Jihad, Daoud Shihab, told "Palestine Today," a website close to the movement, that the US decision gives Israel a political and legal cover to target the heads of the Palestinian resistance wherever they are, describing the decision as "dangerous."

Islamic Jihad came under a lot of political and military pressure last week, after its military wing was accused of rapid escalation, through firing sophisticated rockets at Israeli towns.

This escalation reached its peak when Israeli bomber planes targeted two members of the Al-Quds Brigades, the military wing of Islamic Jihad. One of those targeted was Ahmed Saad, who was struck on the morning of Jan. 19, while riding a motorcycle in the center of Gaza City. He was seriously injured in the attack. The other member targeted was Ahmed Zaanin. On the morning of Jan. 22, Zaanin was getting into a car with a relative when the planes carried out the strike, killing them both.

In multiple posts on his Facebook page, Avichay Adraee, the spokesman for the Israel Defense Forces (IDF), said that the army targeted Islamic Jihad militants who had fired rockets toward Israel in recent days and who had planned other attacks.

The rising tensions between the two sides could lead to the collapse of the cease-fire agreement, which was carried out under the sponsorship of ousted Egyptian President Mohammed Morsi in November 2012, ending the war that lasted eight days. In the midst of this escalation, Hamas — which has led the Gaza government for seven years — rushed to communicate with Islamic Jihad to ensure the continuation of the agreement.

Speaking to Al-Monitor over the phone, Hamas spokesman Sami Abu Zuhri said, "Contacts have been carried out between several parties — including Egypt — to brief everyone about the Israeli aggression occurring in Gaza, and work to stop it." He noted that Israel must realize that the wisdom of the resistance and its agreement to avoid escalation does not mean it is weak or not ready for a confrontation.

In the midst of a war of accusations against Islamic Jihad, Shihab confirmed to Al-Monitor his movement was not responsible for the escalation that occurred. "We in Islamic Jihad hold Israel responsible, because it wants to evade the understandings of the truce and is once again resorting to assassinations," he said.

During a meeting in his office on Jan. 23, Shihab told Al-Monitor, "We in Islamic Jihad do not know who is behind the launch of these rockets. Israel insists on accusing us, and says that Hamas is responsible since they [lead] the government. This is aimed at creating a state of disagreement between Hamas and Islamic Jihad, given that they are the two primary resistance factions."

Shihab cautioned that, in light of the political circumstances and the regional situation, the Palestinian factions have no intention to escalate matters. According to him, there is a consensus among these factions to commit to the truce, despite the large number of violations and attacks carried out by Israel. "Until this movement, there has been no military response from the Al-Quds Brigades. Israel's allegations are false and are aimed at harming the resistance factions," he noted. Shihab stressed that the Israeli targeting of Islamic Jihad members goes back to previous disputes, not new ones. He noted that Israel has a "bank" of targets that it wants to liquidate.

"If Islamic Jihad was behind the rocket launches, we would have announced that very clearly," Shihab said, confirming that there had been intensive contacts between Hamas, Islamic Jihad and the Egyptians to agree on nonescalation. "The Egyptian authorities that oversaw the truce agreement informed us that we should deprive Israel of the opportunity to [cause tensions between the Palestinian factions]. We will not escalate or initiate anything that breaks the agreement."

However, Shihab said, "The Palestinian resistance is ready for any Israeli aggression, especially since we have information and warnings that other members will be targeted. Israel wants to take advantage of the preoccupation of the Arab World at the expense of the Gaza Strip and settle scores with the resistance. He warned that if Israel does not remain committed to the truce, no one can ensure that it will continue.

In the same context, writer and political analyst Ibrahim Abrash told Al-Monitor that the recent escalation in the Gaza Strip began when some Palestinian groups fired a number of missiles. "But even before the launch of these missiles, Israel had violated the truce agreement intermittently by bombing fishing boats and targeting agricultural areas," Abrash said.

He noted that both Israel and Hamas are uninterested in an escalation, but there are groups that continue to carry out actions against Israel. The fear is that their actions could lead both sides to slide into a new war, according to Abrash.

"In the event that Israel targets Islamic Jihad again, Hamas will be in an awkward position. Either it can ally with Islamic Jihad and participate in a response — in this case the truce will collapse and it will become an all-out war — or Hamas could not intervene, which would affect its relationship with Islamic Jihad," Abrash added.

Abrash believes that the truce achieved goals for both Israel and Hamas. The latter wants to stay in power in the Gaza Strip, in light of regional changes that prevented it from getting support and made supplying it with rockets impossible. Thus, according to Abrash, any escalation would mean Hamas losing military capabilities without getting anything in return.

He added, "Furthermore, Hamas is well-aware that the Arab world is interested in what is happening in Syria, Egypt and Iraq, and will not be sympathetic [with Gaza] in the event of a new war against it. As for Israel, it is not interested in derailing [US Secretary of State] John Kerry's peace plan and upsetting the United States."