Israel is accusing the Palestinian Islamic Jihad of seeking to destabilize the security situation in Gaza in a bid to obstruct the Egyptian-brokered understanding concluded with Hamas. 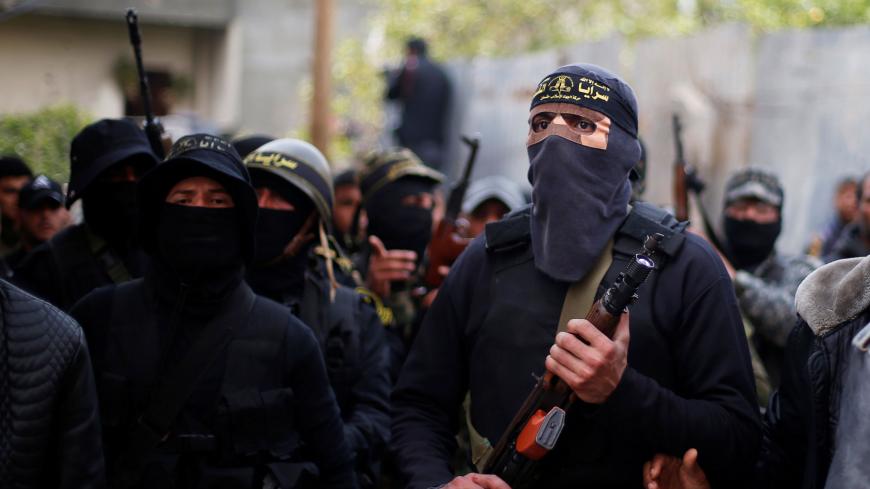 GAZA CITY, Gaza Strip — Israeli military spokesman Avichay Adraee accused the Palestinian Islamic Jihad of planning an attack on the Gaza border, saying in an April 5 Facebook post that such attempts would destabilize the Gaza Strip and obstruct projects to improve life there.

Israeli security forces reported on April 1 that by monitoring several members of the Islamic Jihad military wing in several locations along the border fence between the Gaza Strip and Israel, the Israeli intelligence services gathered information indicating that the Islamic Jihad wants to conduct a series of attacks against Israel to upset the Egyptian-brokered understanding between Hamas and Israel reached in late March to stop the violence along the border with the Gaza Strip.

While the Islamic Jihad denied such reports, Israeli security sources claimed that the movement was behind the March 31 launching of five rockets at Israeli areas adjacent to the Gaza Strip.

After the Israeli army killed four citizens and wounded more than 300 during the demonstrations held March 30 to mark the first anniversary of the great march of return, the Islamic Jihad stated that it was assessing the situation.

A Palestinian security source close to Hamas told Al-Monitor on condition of anonymity that the movement misses no opportunity to breach the truce, under instructions from both Hezbollah and Iran to ignite the Gaza front.

Shihab stressed that all factions agree on the need for calm amid efforts to get the siege lifted, adding, “We are not seeking war. We are defending ourselves, and our duty is to offer a better life for Gazans.”

He denied that the Islamic Jihad claimed responsibility for the rockets launched on March 31 in response to Israel's targeting of demonstrators marches. Israel, he added, should have expected a Palestinian response, given the public ire provoked by the Israelis' lack of commitment to the understanding.

Asked about accusations that the Islamic Jihad did not abide by the instructions of the joint operations room, he pointed out that the movement is part of the coordination body operated by the resistance factions in Gaza. However, he added, the movement wants a reciprocal commitment, as it is difficult to control the situation while the Israeli army continues to target demonstrators.

“The movement supports direct field reactions to Israeli intrusions and deems [such reactions] compatible with the room’s instructions,” he said.

The joint operations room, which was established in July 2017 amid improving Hamas-Islamic Jihad relations, called on the Palestinian armed factions in Gaza to commit to calm in the wake of Hamas’ understanding with Israel.

On Feb. 3, the Islamic Jihad claimed responsibility for the Jan. 22 attack on an Israeli soldier after repeatedly denying Israeli accusations.

In a Jan. 31 statement, the Islamic Jihad threatened Israel with a harsh military response if it continues to accuse the movement of violating the Egypt-sponsored truce reached in October between Hamas in Gaza and Israel and failed to hold, broken by both sides.

In a televised interview on Jan. 30, Gal Berger, Palestinian affairs correspondent for the Israeli Public Broadcasting Corporation, had said that the Islamic Jihad was responsible for attempts to break the recent understanding and for the sniper attack on the Israeli soldier.

Adraee wrote on Facebook Jan. 24 that the Israeli army has recently monitored attempts on the part of the Islamic Jihad to destabilize the security situation in the Gaza Strip, the latest of which was the shooting of an Israeli soldier who was lightly wounded.

Shihab said that the soldier was shooting at demonstrators, and the operation was like a message that the resistance is able to respond in kind. He said that the attack was a field reaction that does not constitute a violation of the truce.

Asked about the understandings, he said that Israel is not expected to abide by them, adding, “We will not accept any procrastination when it comes to the implementation of the truce.”

Hamas spokesman Hazem Qassem told Al-Monitor that the Egyptian-brokered understanding between the Palestinian factions and Israel are concluded in the presence of the various factions, and added that there is an agreement among the factions when it comes to the demands voiced to Israel and the negotiation process. He said there is a clear consensus on dealing with Israel militarily through the joint operations room.

Asked about the recent understandings, Abdo stressed that the Islamic Jihad is not part of the truce and has reservations about it, but it understands it and has no intention of disturbing the atmosphere so long as such understandings offer a way out of the economic situation in Gaza and so long as Israel is committed to the truce. He continued, “The Islamic Jihad is not a reckless movement, and it operates according to Palestinian national controls.”

Asked about the Jan. 22 attack, he said that the Israeli soldier had been caught on videotape targeting unarmed demonstrators, so the Islamic Jihad was forced to respond.

Ibrahim Al-Madhoun, a political analyst with connections in Hamas, told Al-Monitor that Israel violated the truce and is trying to pin the blame on a Palestinian party and avoid treating the Gaza Strip as a single entity, preferring to deal with each party separately.

“Only Israel's commitment to the understandings would contain the situation in the Gaza Strip, and any Israeli procrastination would add insult to injury,” he explained, adding that Hamas won’t move against any Palestinian faction. He stressed that it will work to preserve a solid relationship with all the Palestinian factions, especially the Islamic Jihad, because it wants to avoid internal strife.

“Hamas’ steps are always taken in coordination with the Palestinian factions, including the truce,” he added, saying that Hamas and the Islamic Jihad are ready for all kinds of scenarios but treading very cautiously.