The Gaza-based group expects the release of prisoners, and calls on Egypt to clarify agreement. 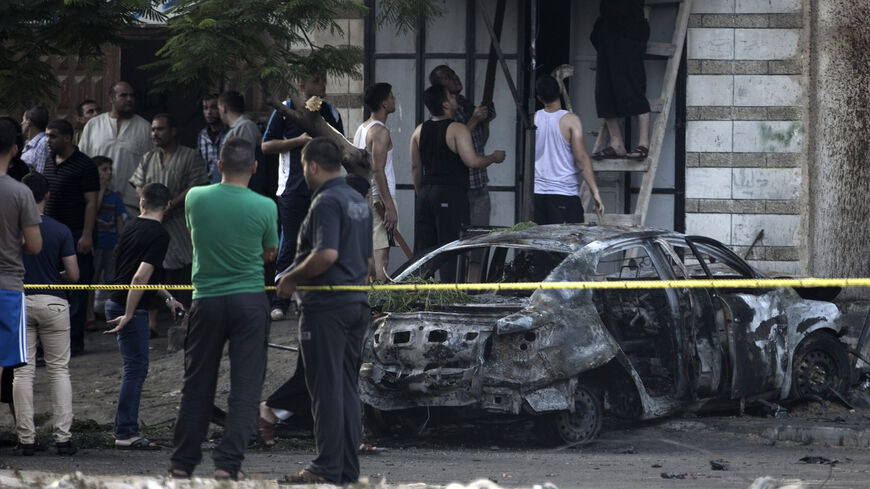 Islamic Jihad has recently expressed dissatisfaction with Israel repudiating the terms of the Egyptian-brokered truce agreement reached Aug. 7 between the two sides following the three-day escalation in the Gaza Strip.

Israel launched an offensive against Islamic Jihad members and leaders in Gaza Aug. 5, following the security tension that prevailed against the backdrop of the arrest of Bassam al-Saadi, one of the group’s leaders in the West Bank, by Israeli forces Aug. 2.

Tension escalated despite international efforts to calm the situation. Israel launched its sudden aggression on the Gaza Strip, killing Taysir al-Jaabari, commander of Al-Quds Brigades' Northern Brigade, by targeting his apartment. Subsequently, Al-Quds Brigades, the Islamic Jihad’s armed wing, announced that its members were on red alert and that it would retaliate.

Since the early hours of the Israeli military escalation, Arab and international mediation started in a bid to contain the situation. Following strenuous efforts, Egypt put forward an initiative for a truce, pledging to work for the release of Islamic Jihad senior member Saadi and hunger striker Khalil Awawdeh from Israeli prisons. Islamic Jihad agreed to the truce, on the grounds that Israel gave its consent as well.

One day after the truce entered into force, Israeli Defense Minister Benny Gantz said in an interview with Israeli Channel 12 News that Tel Aviv did not pledge to release the two Palestinian prisoners as part of the Egyptian-brokered truce agreement with Islamic Jihad, but rather it is Egypt that vowed to open dialogue channels for this purpose at a later stage.

Islamic Jihad blamed Egypt fully for Israel’s repudiation of the terms of the truce agreement. Speaking to Al Jazeera channel Aug. 8, Islamic Jihad leader Muhammad al-Hindi said that the Egyptian mediator was the party that communicated with Israel before proposing this initiative and presenting it to Islamic Jihad negotiators.

Hindi further called on Egypt to provide an explanation to Israel’s noncommitment to fulfilling the group’s demands, stressing that there were no direct understandings between Islamic Jihad and Israel, but rather through Egypt, which is required to keep its word.

Amid Egypt’s silence over Islamic Jihad’s comments and Israel’s continued crackdown against the group’s leaders and members in the West Bank, chances of another escalation round are high, particularly since Islamic Jihad Secretary-General Ziad al-Nakhala threatened in a press conference from Tehran following the truce agreement Aug. 7 that the movement will resume the fighting if Israel does not abide by the terms of the truce.

Speaking to Al-Monitor, an Islamic Jihad military source who declined to be named said that the movement will not stand idly by in the face of the ongoing Israeli practices against the group’s leaders and members.

The source noted that the group is considering several options in the face of the Israeli actions, including the resumption of the fighting in Gaza in the next stage, if Israel does not fulfill the group’s demands.

Ismat Mansour, a Ramallah-based expert on Israeli affairs, told Al-Monitor that Israel deliberately launched a military operation against Islamic Jihad in Gaza, after the group’s armed activity began to increase dramatically in the West Bank, specifically in Nablus and Jenin. He explained that Israel had an objective when it started the battle, which is to liquidate the Islamic Jihad’s military leaders, and it has no intention to abide by the terms of the truce with the group.

He said, “The Egyptian side pledged — after pressuring Islamic Jihad — to work on resolving the outstanding issues in order to stop the Israeli aggression. After Israel’s repudiation of the truce’s terms, Egypt has to resolve this matter, or else it would lose its role as a mediator in any future confrontation, because the repeated breaches of any agreements and understandings will push the factions [in Gaza] to look for another mediator.”

Mansour believes that Israel will not make any concessions to Islamic Jihad regarding the terms of the truce, because despite the mediation efforts to firmly establish the agreement, Israel continues to kill and arrest militants in the West Bank cities, especially Islamic Jihad members and leaders whom Israel believes pose a threat to the security of the West Bank and Israel.

On Aug. 13, Al-Araby Al-Jadeed news site quoted well-informed Palestinian sources as saying that a high-ranking Egyptian security delegation will arrive in Israel and the Gaza Strip in the coming days.

According to the sources, the visit aims to discuss ways to firmly establish the truce that followed the last round of fighting in Gaza and to work on resolving the two prisoners’ files, to avoid a renewed escalation in light of the Islamic Jihad’s threats and Egypt’s keenness to fulfill what was agreed upon during the cease-fire talks.

Sharif Halabi, writer and political analyst close to Islamic Jihad, told Al-Monitor that Israel knows that denouncing the agreement will lead to a resumption of the confrontation, but it is procrastinating in resolving the prisoners’ issue in order to avoid showing the Israeli public that Islamic Jihad achieved a tangible victory in the battle.

He explained that the Israeli position has dealt a blow to Egypt, as the Egyptian mediator is the one that made this commitment to the group and pledged to work for the prisoners’ release in exchange for a cease-fire, regardless of Israel’s repudiation.

Therefore, Egypt is required not to ignore the group’s demands and to avoid subsequent tensions between the two sides, he added.

Halabi believes that it is very probable for Islamic Jihad to escalate the situation if it does not obtain positive results, and the fact that Awawdeh’s health condition has deteriorated and has become life-threatening would increase these chances.