Civilians queue at bakeries and stock up on food in fear of a new war with Israel. 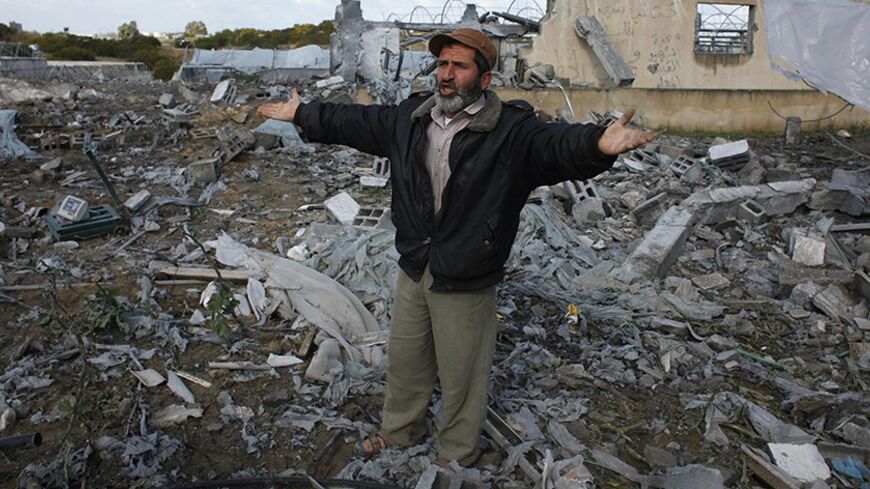 A Palestinian man gestures as he inspects the scene of an Israeli airstrike in Rafah in the southern Gaza Strip, March 14, 2014. - REUTERS/Ibraheem Abu Mustafa

GAZA CITY, Gaza Strip — The sound of thunder mixed with that of Israeli bombing on March 11. Gazans could no longer tell when the sky was exploding and when a bomb was exploding.

Social networking sites were filled with posts combining the fear of a new war with the joy of rain, following a military escalation between Israel and the Palestinian resistance factions. The escalation began on March 11, after an Israeli airstrike assassinated three members of the Al-Quds Brigades, the military wing of Islamic Jihad, in the southern Gaza Strip. The Al-Quds Brigades responded by launching an operation they called "Breaking the Silence" on the evening of March 12, during which they fired 130 rockets and shells at Israeli cities.

Gaza resident Saad al-Waheidi tweeted on March 12: "Yesterday in #Gaza the sounds of shelling and 'glory' rockets overlapped with those of the thunderstorm … a magnificent symphony that will not be repeated."

During interviews with Al-Monitor on the morning of March 13, Gazans expressed their fears of a new war. "We were struck by terror last night after local rockets were launched [at Israel]. We were awaiting an Israeli response, and thought the sound of thunder was shelling. However, every time [we heard a sound], the sky would light up confirming it was thunder, thus we breathed a sigh of relief," said Khitam al-Hamayda.

Hamayda's friend, Iman Mortaja, agreed. "We thought the war had begun. With every thunderbolt we would listen carefully to determine whether it was bombing or not. Our hearts were beating with fear, because we do not want a new war," she said.

State employee Maysoun, sarcastically said to Al-Monitor, "I thought that the war had begun. Yet, when I woke up Thursday morning I saw that everything was calm. Honestly, I was hoping for a new war to change the routine of the siege and crises in Gaza." She said that as soon as news spread about a potential new war, gas stations were filled with cars and citizens flocked to bakeries.

Tahar al-Khalidi, a worker at the Canada Bakery in Rafah, told Al-Monitor, "During times of military escalation, the residents of the region rush to buy bread, even though they usually bake at home."

"Following news of a [potential] war and the storm, everyone went out to buy bread. In a single day, I sold 25 bundles of bread, each consisting of 23 loaves, while on normal days I sell 15 bundles," he added.

Eyad al-Kadsh, from Rafah, said that many citizens went out to buy bread in large quantities following the spread of news about the Israeli aggression and the sounds of shelling. "My family counts 55 members, including men, women and children. It is difficult for us to by bundles of bread because they are very expensive. Thus, we gave a bakery flour to bake bread for us," he said.

On Wednesday evening, Israel announced the closing of the Karam Abu Salem commercial crossing. "Israel officially informed us, via the General Administration for Crossings, that Karam Abu Salem was closed until further notice for security reasons related to the latest developments," said Raid Fatouh, the chairman of the Coordination Committee for Goods in the Gaza Strip. Fatouh told Al-Monitor that the biggest crisis facing the sector is the shortage of fuel, in light of the absence of any fuel stores.

This military escalation comes at a time when the siege on Gaza has tightened, after the Egyptian authorities closed the Rafah crossing more than a month ago, opening it only for pilgrims traveling to Mecca in Saudi Arabia. "However, this siege will not prevent the resistance from responding forcefully in the event of a new Israeli aggression,” said Hamas spokesman Sami Abu Zuhri in an interview with Al-Monitor.

"The [Israeli] occupation is responsible for the existing escalation in Gaza, since it began with the assassination of three Islamic Jihad members," added Abu Zuhri, explaining that the resistance is in a state of self-defense.

Abu Zuhri warned that the occupation's threats will not scare the resistance factions and, if a battle is imposed on them, they will protect the Palestinian people. He refused to talk about the details of the resistance's plans, because of what he describes as a desire "not to provoke fear among the Strip's residents."

Regarding the capabilities of the resistance in light of the blockade, he said, "It is true that there is a huge difference in capabilities between us and the occupation, but we have a strong will."

In the same context, political writer Ibrahim al-Madhoun told Al-Monitor that all scenarios are possible, and said that the situation could witness a serious deterioration. "I think that the occupation does not want to develop the confrontation into a war. Furthermore, Hamas is keen not to enter into a confrontation directly. Thus, I think that the occupation will deal severe blows to Islamic Jihad and the resistance," he added.

Madhoun said that Hamas is in a difficult and complex situation, and there is an audible voice within the movement saying that the cons of the truce now outweigh its pros in light of the siege, the worsening financial crisis, the increasing hostility from Arab states to Hamas' existence and attempts to change the reality in Gaza.

Khaled al-Batsh, a senior Islamic Jihad official, wrote on his Facebook page on Thursday afternoon: "After intensive efforts and contacts on the part of the Egyptians, we confirmed that the truce is still intact, according to the understandings that were reached in Cairo in 2012 under generous Egyptian auspices. However, this is on the condition that the enemy respects these understandings and does not violate the agreement."

However, Madhoun believes that this truce might be a trick on the part of the Israeli occupation. "The occupation has tricked the resistance multiple times in the past. They have talked about [maintaining] calm while at the same time hunting big targets. They want the resistance to be complacent, to make it easier to target something that will start an aggression," he added.

Islamic Jihad leader Ramadan Shallah told Al-Mayadeen TV on March 13 that his movement was committed to the truce. "We will maintain the truce, as long as the Israeli enemy maintains it," he was quoted as saying. However, Israeli did not even wait for this news regarding the truce to spread before Israeli occupation planes began striking resistance faction targets in the southern and northern parts of the Gaza Strip at dawn on March 14.

As the Israeli bombardment returned, so did the Facebook posts made by Gazans about the possibility of a third war and ridiculing the truce. "The truce turned out not to last long," wrote Hatem Afana.

Abeer Abu Hashim, from Rafah, was unsure of whether to close her home's windows to protect her son, Ewan, 3, and daughter, Angie, 1, from the cold and rain, or to open them so that the glass would not shatter from the bombing. "I closed the windows because of the extreme cold and rain, fearing for my son and daughter. When the shelling started I didn't open them, but when it intensified I did, fearing that the glass might break."