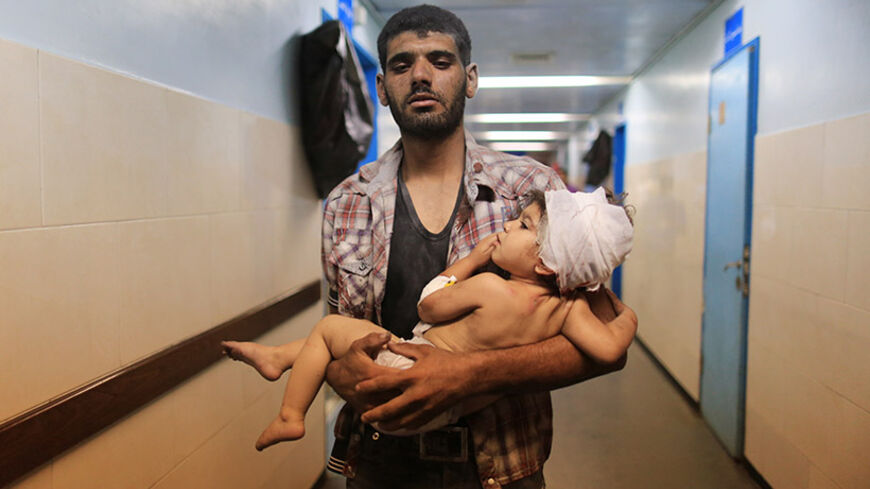 A Palestinian man carries his child, who medics say was wounded in an Israeli airstrike, at a hospital in Gaza City, July 9, 2014. - Wissam Nassar

GAZA CITY, Gaza Strip — At the time of this writing, July 9, the Ministry of Health has told Al-Monitor that 76 Palestinians have been killed and more than 520 wounded since Israel began its latest offensive against the Gaza Strip. On July 8, Israeli airstrikes targeted an inhabited house, a civilian car and empty plots of land.

Events had escalated sharply, when Izz ad-Din al-Qassam Brigades, the military wing of Hamas, on the evening of July 7, following the burial of six of its members, launched volleys of rockets into Israeli cities and towns bordering the Gaza Strip for the first time since the eight-day war in November 2012.

According to the spokesman for the Palestinian Ministry of Health, Ashraf al-Qadra, “Injuries were mostly registered among civilians, in particular women and children, especially those who come from the northern and southern provinces. Following a meeting with the Higher Committee for Emergency Services, the Ministry of Health and the latter declared a state of emergency and alert among all medical and health personnel in hospitals operating under the Ministry of Health." He added, “We have canceled all leaves and increased the shifts of nurses, physicians and staff, especially in light of the Zionist escalation.”

At dawn on July 8, the Israeli occupation forces initiated a military operation against the Gaza Strip, with dozens of air raids on the Strip’s cities and camps. The largest number of casualties was registered in the city of Khan Younis, southern Gaza Strip, while Israeli planes bombed the house of the Kawareh family that same afternoon.

Salah Kawareh, 26, one of the inhabitants of the house that was bombed, told Al-Monitor, "In the afternoon, warplanes bombed my brother’s apartment in the same building I live in, after receiving a warning by phone that our home will be bombed and we must leave within five minutes. But locals in the area insisted on going up to the roof to protect our building and some of them stood on the internal staircase. Nevertheless, the warplane bombed the house, which caused injuries and martyrs.”

Qadra told Al-Monitor that the bombing of the house led to the death of seven civilians, including two children — one, 10, from the Kawareh family, and Seraj Abdel-Aal, 11 — and to the wounding of 25 others.

The house of the Kawareh family was not the only one bombed by Israeli aircraft after a warning was sent to the occupants. In fact, 112 other homes were destroyed after residents received a telephone warning from Israel and were given five minutes to evacuate their homes.

Sitting in front of the rubble of his house in the Zeitoun neighborhood east of Gaza City, which was bombed by Israeli aircraft at dawn on July 8 and turned into a hill of rubble and concrete, Majid al-Zabout, 29, said, “Someone called one of our relatives living nearby and told him in Arabic, ‘Tell your relatives living in the house near you to vacate their home within five minutes.’ Then, my relative came out screaming: ‘Get Out! Get Out!’ We immediately got out of the house, as well as the families of the adjacent houses. The house was bombed in a violent and terrifying way.”

Houses near Zabout’s home looked almost completely destroyed as a result of the shelling, as two missiles were launched at Zabout’s house, according to witnesses from the area. Zabout told Al-Monitor, “I had no time to do anything but to take my kids and the rest of my family, consisting of 19 people, out of the house amid screaming and crying." Zabout said. There were metal cages with dead birds inside them among the ruins of the demolished house, and Zabout said, “My hobby is to breed birds, and I had more than a hundred canaries and astrild birds. Only five were rescued by the children in the neighborhood.”

Gaza’s hospitals were filled with wounded victims and the dead after the bombing of a civilian automobile in central Gaza City on July 8. Al-Monitor witnessed the admission of three casualties to Al-Shifa Hospital. Their bodies were burned and the hospital was filled with the smell of burning flesh. Family members were crying “God is great!” The police tried to search among the remains of the dead to identify them. It later turned out that one of them was Mohammed Shaaban, the commander of Hamas’ Marine Commando unit in al-Qassam Brigades. 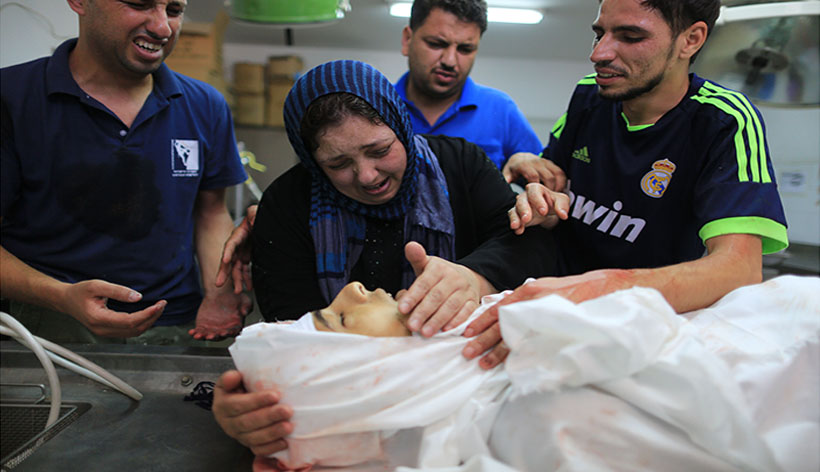 The mother of Hatem Salem, who was killed during an Israeli airstrike in Gaza City, cries next to his body in Al-Shifa Hospital's morgue, July 9, 2014. Photo by: Wissam Nassar

Regarding the congestion of hospitals, Qadra told Al-Monitor, "There is a 30% shortage of essential medicines and emergency and intensive care medicines. Moreover, 15% of the drugs may be depleted in the coming days, in addition to the depletion of 55% of medical disposables, such as gloves." He also said fuel reserves were diminishing, which heralds a huge disaster in light of the continued conflict, especially in the absence of any intervention by the government of consensus of Ramallah to save the hospitals and emergency health care in the Strip, despite numerous appeals.

Ibrahim Harazin, 12, and Mohammed Abu Tawileh, 15, lie in the surgical department at the hospital. The two children were injured as a result of Israeli airstrikes over an empty area in the middle of residential houses in the Shajaiya neighborhood on the afternoon of July 8. Ibrahim Harazin told Al-Monitor, "We saw the bombing as we were standing in front of my house and I felt pain in my back, so I started running. Later on, I found out that I was hit by shrapnel in the back and I saw my neighbor, Tawileh, injured after he received shrapnel in the face.”

The father of Tawileh, 46, spoke to Al-Monitor while his son was lying unconscious before us on a hospital bed after undergoing surgery, “I thank God that my son is alive. The shrapnel hit him in the face and nose and his surgery was successful. My son was standing in front of the house when he was hit and the neighbors took him to the hospital."

Panic has spread among the people of Gaza, with the repeated sounds of aerial and naval bombardment. Shops are closed and the streets are empty of pedestrians and vehicles. Locals gather at the doors of bakeries to stockpile bread.

Abu Bilal al-Hayek, 37, told Al-Monitor while waiting in a queue in front of al-Shanti bakery, “I went to more than one bakery and found crowds. Ultimately, I decided to stand in line at this bakery to buy bread and freeze some of it for fear of increased shelling preventing me from getting out of my house.” 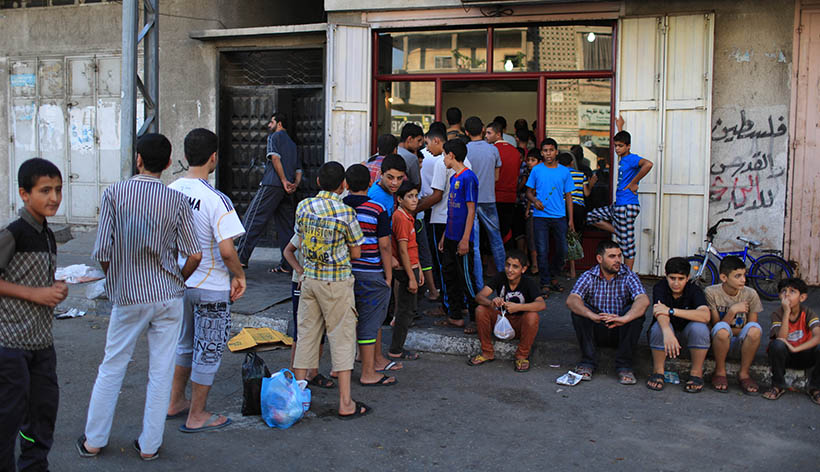 Palestinians in Gaza City wait in front of a bakery to buy bread, July 8, 2014. Photo by: Wissam Nassar.

Hassan al-Shanti, the owner of the bakery, told Al-Monitor that the fuel crisis was hindering production of bread. "There is a real fuel crisis on the rise, and I need 500 liters of fuel per day to run the bakery. The demand for white bread is growing every day. Since the escalation of the bombing our bread sales increased by 70%, compared to normal days."

The first day of military escalation ended with the announcement by al-Qassam Brigades on its website that it fired a local type R-160 rocket against Haifa for the first time in the history of the Palestinian resistance. It also announced that it had launched eight M-75 rockets against Tel Aviv and Jerusalem and targeted Zikim military base with 10 107-type rockets. Moreover, Saraya Al-Quds Brigades, the military wing of the Islamic Jihad had claimed responsibility for the targeting of Tel Aviv, with two rockets.

All indications point to a frightening period ahead for the people of Gaza.