The final article in a four-part series examines the Palestinian Islamic Jihad movement’s relationship with Iran and other regional parties. 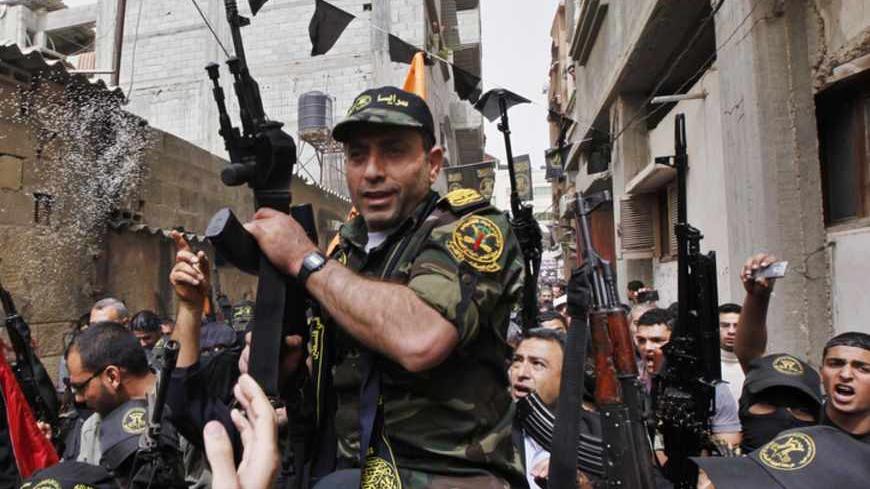 Freed after 27 years in prison, Palestinian Ibrahim Baroud holds an assault rifle as he carried on the shoulders of Islamic Jihad militants, as he arrives at his home in the northern Gaza Strip, April 8, 2013. - REUTERS/Mohammed Salem

At the end of 1979, the Islamic revolution in Iran inspired the founder of the Palestinian Islamic Jihad (PIJ) movement, Fathi Shakaki, who wrote the book Khomeini: The Islamic Solution and the Alternative out of admiration for the Iranian experience.

Back then Shakaki was still a student in Egypt. His book represented something new, as it expressed the admiration of a Sunni Muslim for the Shiite revolution, prompting the Egyptian security services at the time to arrest Shakaki, according to Nazim Omar’s book Political Ideology of the Islamic Jihad Movement in Palestine, published in 2008.

Concerning Iran and the PIJ, Mohammad Hejazi, an expert on Islamist movements, told Al-Monitor that there are two trends within the PIJ. The first considers that its relationship with Iran is ideological and goes as far as accepting the principle of Shiism. This trend, however, is weak within the movement. There is another strong trend that converges with Iranian policy in the face of Israel. This one supports Hezbollah and accepts Iran’s weapons and financial support in the equation of the Iranian-Israeli conflict. It also accepts that a base of Iranian missiles be established in the Gaza Strip, and believes that the organizational and military structure of the PIJ is similar to that of Hezbollah, and that there is no separation between the PIJ’s military and political wings.

Daoud Shihab, the media spokesman for the PIJ, does not hide that Iran is the movement’s main supporter. While noting that there are other parties [who support the PIJ], he said, "All of the weapons in Gaza are provided by Iran, be they weapons intended for the Hamas movement or for the PIJ. Perhaps Hamas even has more Iranian weapons than us; and everyone knows that Iran is financing us.” Shihab said that “the PIJ is a resistance movement, and while there are many parties in the Arab and Muslim world offering support for the resistance, the largest share of this financial and military support is coming from Iran.”

During a meeting with Al-Monitor in his office, Shihab said that the main factor that defines the PIJ’s relationship with various regimes is the extent to which these regimes or states are close to the Palestinian cause. Thus, Iran supports the Palestinian people and the resistance, and it is not ashamed of this support, but faces a lot of pressure because of it. Therefore, he adds, there is a strong relationship between the PIJ and Iran, and their admiration for the Iranian Revolution does not mean that they are imitating it, adding, "the PIJ existed before the Iranian revolution."

Shihab stressed that even if Iran is the [PIJ’s] main supporter, this does not mean that they are serving its agenda, adding, “such allegations hurt us, we have our program and our project and they have their own, and our program is limited to Palestine.”

Shihab said that what is happening in Syria is an example of their non-dependence on Iran. Iran is supportive of the Syrian regime, while the position of the PIJ is neutral and does not support any party.

Shihab objects to what is being said about the PIJ’s inclination toward Shiism, explaining: “This is not true. These are rumors aimed at distorting the image of the PIJ, and they come from Israel. We faced similar rumors at the beginning of the founding of the movement in the late 1970s and early 1980s. Back then, they said that Iran had infiltrated [the PIJ] and that we were trying to spread Shiism. We faced these accusations for a long time. Were they true, there would have been a correlation between Shiite ideology and the PIJ, and Shiism would have gained a broad base, but where are those who have converted to Shiism in Gaza when the PIJ has been on the ground for more than 30 years?!” He expressed his regret at the fact some people believed such rumors.

Despite Shihab’s reaction, PIJ Secretary-General Ramadan Shallah strongly confirms their relationship with Iran in his book titled The Islamic Jihad Movement in Palestine: Facts and Attitude, published in 2007. Shihab says in this book, “The US and all the Western and pagan world are entitled to reach out to this cause to liquidate it, yet Iran and other Arab or Muslim countries do not have the right to assist Palestine or the resistance in any way. Iran is not the problem, but supporting the resistance is.”

In his book, Omar added that PIJ leaders have always considered Shiites to be Muslims; declaring them to be infidels in the movement is a temporary position that the West is using to divide Muslims, and the split between Sunni and Shiite Muslims should not take place. He explained that these ideas were expressed by PIJ Secretary-General Shallah in a lecture in the 1980s.

"We are a Palestinian resistance movement, and the resistance has a distinctive character. The Palestinian cause should not be subject to polarization. Palestine is greater than all axes, and we do not accept to be part of the conflict,” noted Shihab, who expressed the PIJ’s stance on what is taking place in Syria.

He added that they condemned the recent Israeli aggression against Syria, and that the policy of self-restraint towards Israel does not do any good. They, however, believe that the Gaza Strip has nothing to do with these raids, and cannot afford defending any major countries, since it is weak, and it is only required to take a counter position. Shihab asked: “Is weak Gaza required to defend sovereign countries with capabilities and regular armies? Moreover, Syria is geographically far from us. Based on our capabilities, we can only be a resistance that fights the [Israeli] occupation.” Shehab denied the lies circulated by some saying that members of the PIJ are fighting in Syria.

Hejazi said that it is hard for the PIJ to be involved in the Syrian issue, or to militarily react from Gaza, because at that time, the Israeli reaction towards Gaza will be violent. He explained that Israel is likely to launch a preventive strike on Gaza — if it decided to declare war and strike Iran and Syria — by striking the PIJ’s rocket launching platforms. If the PIJ responds, it will pay a very heavy price and the Israeli reaction will be extreme.

Hejazi stressed that the PIJ will not get involved in Syria. However, he did note the movement’s clear position toward countries supporting the Syrian revolution. For instance, the PIJ is suspicious of Qatar’s role, particularly since the As-Sayliyah US base — which is the largest in the region — is located in Qatar, and Qatar has privileged ties with Israel. Therefore, the PIJ considers that Qatar’s position goes against the national Palestinian and Arab positions, particularly since it opposes Iran and Hezbollah — which are primary allies of the PIJ.

On Qatar, Shehab said, “We are a resistance force in Palestine, and there exists no enmity between us and any other Arab or Islamic party. When the Emir of Qatar visited the Gaza Strip, we welcomed him, just like other Palestinian factions. Yet we reject what was approved by the Arab [Peace] Initiative Committee, led by Qatar, in meetings with US Secretary of State John Kerry on the land exchanges. This is a political rejection of any pressure from any party, in order to make political concessions.”