Islamic Jihad: 'We Will Not Accept A State on the 1967 Borders'

In the third article of a four-part exclusive series, Asmaa al-Ghoul analyzes the Palestinian Islamic Jihad movement and its relationship with other Palestinian resistance groups. 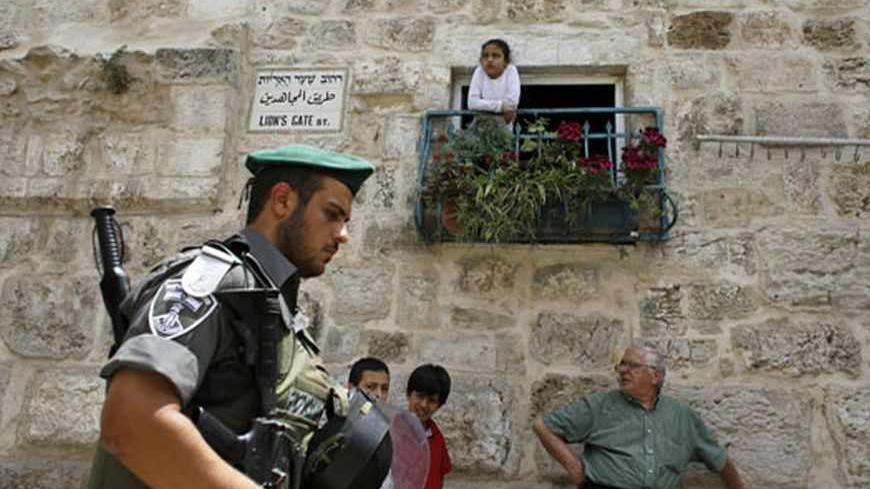 An Israeli border police officer walks past Palestinians in Jerusalem's Old City before a parade marking Jerusalem Day, May 8, 2013. Jerusalem Day marks the anniversary of Israel's capture of the Eastern part of the city during the 1967 Middle East War. - REUTERS/Ammar Awad

"They blocked you, but our hearts still belong to you, our homeland." So read the writing on the massive banners adorning the streets of Gaza even long after Khaled Meshaal's visit to the Gaza Strip. The banners bore massive images of Islamic Jihad's Secretary General Dr. Ramadan Shallah. Israeli occupation forces threatened to assassinate them both in the event of their entrance to the Gaza Strip. This was the political price that the Palestinian Islamic Jihad (PIJ) movement was forced to pay following the recent war last November. That is, in addition to becoming Israel's most wanted target, despite the truce Hamas agreed to with Israel (under Egypt's sponsorship and at the United States' behest) that concluded the eight-day war.

This truce exacerbated the unofficial divide between Hamas and the PIJ, a fact which is attested to by the messages that representatives from the PIJ in Gaza wrote to those negotiating on their behalf in an attempt to conclude a truce during the recent war.

Al-Monitor has obtained one of the messages that was sent on the war's sixth day, in which Shallah noted that the truce's goal is not to weaken Hamas' political role or undermine its rule over Gaza, but instead weaken the military strength of the resistance movements, including the [Hamas-affiliated] Qassam Brigades.

The message warned that Israel is seeking from the truce to effect a renewable, long-term truce, such that Gaza would be removed from the arena of armed struggle, while Israel would continue its settlement project in the West Bank and the barriers between Gaza and Egypt would be lifted. The message recommended that, in order to thwart these goals, the truce must be tied to events in the West Bank: a cessation of settlement construction, limiting the duration of the truce, linking it to the issue of [Palestinian] prisoners, ceasing the [Israeli] army's daily raids in the West Bank and opening the crossings to Gaza. They also made these demands in the presence of Palestinian Authority President Mahmoud Abbas, who was to act as a ceremonial figure for the truce negotiations and the final guarantor of the foregoing conditions.

Shallah demanded in the cease-fire negotiations that the message's recommendations be implemented, but the other parties did not agree. Moreover, heavy pressure was brought to bear by both Hamas and Egypt on the PIJ, which eventually consented to the truce. Still, the PIJ did not sign the agreement in a de jure sense.

Daoud Shihab, the official spokesman for the PIJ, preferred to call the pressures that were employed in order to bring the movement to sign the truce another name. He described them as the “political rules of the game” that must be accepted, and which can only be changed with more time, effort and support from the Arab nation to the resistance.

Regarding the content of the message itself, Shihab stressed to Al-Monitor during an interview in his office that the PIJ's conditions for signing the truce sought to link it to the West Bank. He emphasized that the presence of Abbas was not [sought] out of fear that Hamas would be isolated. Rather, it was tied to the unity of the Palestinian position. [He said that] Palestinians must be united, noting that Abbas refrained from condemning a single rocket launched by the resistance against Israel.

Muhammad Hijazi, an expert on Islamist movements, told Al-Monitor that permitting Meshaal to enter the Gaza Strip while failing to allow either Shallah or Ziad al-Nakhlah [PIJ's deputy leader] to do so after the truce was concluded demonstrates that the real parties to the agreement were Israel and Hamas. The PIJ was left on the outside, regardless of its eventual acquiescence to the truce.

In turn, Shihab made clear that halting the aggression at that time was a vital concern, so that Gaza would not pay an even heavier price. He added that "the truce, as far as the [PIJ] movement is concerned was a tactic. It is not a strategy. We are not fighting for the sake of a truce. The core of the matter is that the resistance is not based upon the principle of actions and reactions; rather, it is connected to the existence of the occupation."

Here, the discussion concerning the PIJ's relationship with Hamas widens. Nazem Omar states in his book The Political Ideology of the Palestinian Islamic Jihad Movement, published in 2008, "Hamas' dealings with Islamic Jihad have been characterized by aloofness and condescension. It continues to look upon Islamic Jihad as a splinter movement that must return to the bosom of its parent movement. The tension between the two reached the point of confrontation in April 1992, when Islamic Jihad accused Hamas of shredding its official statements and assaulting the mosques under its control."

During an interview in a Gazan cafe, Hijazi remarks that the PIJ looks at Hamas' control over the Gaza Strip as an unnatural rule that both harms the Palestinian cause and hinders the PIJ in the Gaza Strip. The price of Hamas' rule in the Gaza Strip is a military truce.

Shihab, however, does not believe this is accurate. In his words, "our relationship with Hamas is a complementary one based upon mutual respect. The relationship has witnessed significant development, in spite of our disagreement on many issues. Nevertheless, there is a very large degree of agreement on the issues pertaining to the conflict with Israel, the constants of the Palestinian cause and the enterprise of the resistance. But perhaps our Hamas brothers have a particular strategy and we have a different one. This does not reflect a significant difference between us."

In his book The Islamic Jihad Movement in Palestine: Facts and Attitude, published in 2007, Shallah discussed the relationship in the following way: "It is no secret that, historically, it has gone through phases of ebb and flow … Today I can say that the relations within [Palestine], despite all the problems, are good. But relations abroad are much better; there is communication at the highest levels."

“Palestine, liberated from the river to the sea”: It is one of PIJ's principles that is mentioned on the group's website. By contrast, Hamas has been speaking for some time about a state within the 1967 borders. This is the main contrast that the international community sees in weighing whether or not to accept the resistance movement into the political arena.

According to Hijazi, Hamas is part of the global Muslim Brotherhood movement and numerous understandings have gradually been reached between the Muslim Brotherhood, led by Egypt, and the US administration. The essence of which boils down to this: The Muslim Brotherhood would be allowed to ascend to power in the Arab region, in exchange for its recognition of the Camp David Accords, preserving human and women's rights, and safeguarding US interests.

He further added that "Hamas is part of the Muslim Brotherhood. It is moving from resistance and the "rejection axis" of Hezbollah, Syria and Iran to the "moderate axis" of Qatar, Turkey and the new Muslim Brotherhood-led regime in Egypt. This means that Hamas has moved closer to the US sphere of understanding. The price that the US administration will require for Hamas to join the political system is threefold. First, Hamas must openly accept a Palestinian state on the 1967 borders. Second, it must join the negotiations and [accept] a peaceful solution. Third, it must recognize Israel. If it is unable to recognize Israel, then it is possible that the United States and Israel might accept a role for Hamas in the political process; not as a political partner for the Palestine Liberation Organization (PLO) but as a rival negotiator instead of the PLO."

Hijazi notes Hamas' acceptance of "temporary borders" for a Palestinian state, something proposed by both [former Israeli prime ministers] Sharon and Olmert, albeit with cosmetic modifications. [Hamas] chose instead to speak of a "long-term truce" that could last up to 20 years, in exchange for Hamas' continued rule over the Gaza Strip.

Concerning the completely different position adopted by the PIJ, Hijazi observes that the PIJ has no political program, and does not aspire to govern. Its platform is limited to continuing with resistance and jihad against Israel in order to eliminate the Jewish state. It will not accept a two-state solution; for the PIJ, the conflict can only be ended when the other side has ceased to exist. In this, it draws support upon its firm alliances with Iran, Hezbollah and Syria.

Shihab agrees completely. As he puts it, Palestine for his group extends from the river to the sea. He adds, "We will not accept a state on the 1967 borders, even if there is a willingness among other parties to do so. The Palestinian position must be hardened." He went on to say that double-talk on this issue, whether it comes from Hamas or anyone else, does not serve the Palestinian cause.