The public approval ratings of Islamic Jihad received a boost after the Gaza war, benefiting from the group's determination to stay out of the Hamas-Fatah feud. 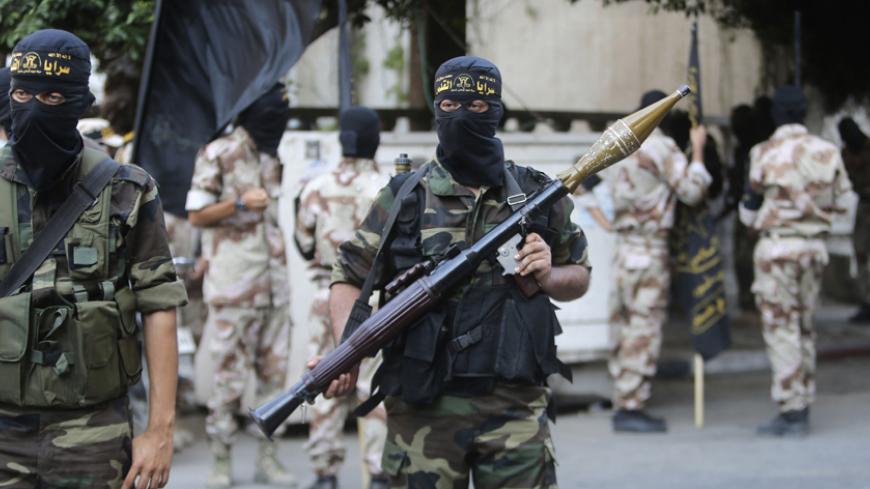 A Palestinian Islamic Jihad militant holds a rocket-propelled grenade launcher during a rally celebrating what the militants say was a victory over Israel following a cease-fire in Gaza City, Aug. 29, 2014. - REUTERS/Ibraheem Abu Mustafa

GAZA CITY, Gaza Strip — The latest Gaza war has done little to change the ideological position of Islamic Jihad, which continues to repeat its goals of resisting the occupation and recovering the entire land of Palestine.

Islamic Jihad is firm in its position, although on the ground it agreed to a truce that is not in line with its creed, which calls for a ceaseless struggle against the occupation forces. During an interview with Al-Monitor, Khaled al-Batsh, a leader of Islamic Jihad, stressed that the movement is committed to a cease-fire and denied any knowledge of mortar shelling of Eshkol on Sept. 16.

“We are not aware of this. We are committed to the cease-fire that was reached under the auspices of Egypt, as long as Israel is committed to it,” he said.

While stressing that the movement is committed to the cease-fire, he said that Islamic Jihad is engaging in a national liberation phase and will not abandon its right to resist, acknowledged by UN resolutions.

Hassan Abdo, a political writer close to Islamic Jihad, believes that it is unlikely that the movement will change its ideological principles, such as accepting a state based on the 1967 borders. He told Al-Monitor, “This idea is out of the question in the movement’s ideology. Islamic Jihad believes that it has a right to the entire land of Palestine. Why do people find this surprising, while Israel also demands to have the entire land of Palestine to itself?” Abdo believes the movement agreed to the truce to take a more flexible stance, but this does not reflect any ideological change in the movement’s strategy and commitment to the resistance.

The independence issue is clear in the movement’s decisions. Islamic Jihad leader Mohammed al-Hindi said during an honoring ceremony on Sept. 11, “The decision of war is not in the hands of a government or an authority. Everyone knows that we are not a real state, that both the Gaza Strip and the West Bank are occupied and that the enemy is the one that started the hostilities. Is the resistance supposed to sit and wait for the war decision to be made?"

Abdo shares that opinion, considering the resistance a valid strategic option. He said that the resistance will not participate in a political authority in the West Bank nor in the Gaza Strip, so as not to be forced to make political concessions.

He added, “At the same time, Islamic Jihad is aware of the importance of the truce, and considers it part of the resistance. It implies the development of the resistance and the obstruction of the Israeli army’s ability [to launch] daily aggression. Thus, the movement has only two options: either resist the occupation, or get ready to resist it.”

Abdo believes that this war made the movement “more realistic and understanding of the regional and international dimensions, especially with regard to the decision-making parties in the Palestinian issue, such as Egypt. But politics did not achieve on the negotiation table what the resistance has achieved on the ground.”

A political analyst who spoke to Al-Monitor on the condition of anonymity said that this position is in line with Hamas’, explaining, “This position was most prominent in the recent war, to the extent that the movement abided by Hamas’ decision to launch the war and end it.”

“The Islamic Jihad does not believe in the idea that Gaza is an independent entity from Palestine, and does not approve of the interim solutions. Despite this, it did not have a problem with demanding the acquisition of the airport, seaport and the opening of the border crossing, which give Gaza a political independent dimension. The movement also failed to impose its conditions regarding linking Gaza to the West Bank,” he added.

He said that this identification with Hamas could be construed as national discipline. However, Islamic Jihad is distinguishing itself from Hamas to a lesser extent, which suggests that it may be preparing to participate in the political process and most importantly, the reconstruction process.

Nevertheless, he denied that the movement will renege on its ideology, but said it will instead dig its heels, upholding the famous Palestinian saying that goes, “partners in blood, partners in the decision.”

Abdo had a different opinion. “The Islamic Jihad considers Hamas an essential, strong component in the resistance against the occupation forces and does not wish to be at loggerheads with the movement at this stage,” he said.

He stressed that Islamic Jihad is on good terms with the entire Palestinian spectrum. It has sent a letter to Abbas, thanking him for the role he played during the war, in a bid to avoid rivalry with any faction. “The Islamic Jihad will not take part in the battle between Hamas and Fatah,” Abdo added.

Despite this accord with Hamas, the population felt that during the war, Islamic Jihad showed more solidarity and sympathy for the people's pain and was more determined than other parties to end the war. This public approval was shown in the results of a poll by the Watan Center for Studies and Research in the Gaza Strip. After the war, support for Islamic Jihad increased by 30.8%, and for Al-Quds Brigades, the military wing of Islamic Jihad, by 28.9%.

Independent political analyst Hani Habib told Al-Monitor, “The Islamic Jihad movement has become very popular and showed during the war that it is more cohesive, organized and flexible. It did not make contradicting statements and was concerned about the people's suffering.”

Habib said that the movement has proven that its regional ties do not affect its Palestinian decisions, “unlike the others, whose decisions are linked to external [forces].”

For his part, Batsh pointed out that his movement has made great efforts to stop the Israeli aggression and prevent it from reaching its objectives. “The occupation did not achieve its four goals: occupying all of Gaza, clearing it from the resistance, handing it over to a UN party and placing it under a Palestinian party that agrees on the presence of the occupation there.”

He continued, “During the war, we constantly spoke of a cease-fire to promote the people’s resistance and to give hope that the aggression will stop.”

Abdo said that Islamic Jihad sought a cease-fire from the very beginning. “The strategy of Islamic Jihad resides in preventing aggression. Yet, when it occurs, the movement’s mission is to prevent it from achieving its goals.”

He stressed that the people of Gaza are satisfied with Islamic Jihad, as it was the group most considerate of their suffering and the most dedicated to the prevention of the disastrous destruction of Gaza, while the actions of other Palestinian parties were based on the regional situation.

“President Mahmoud Abbas was in an agreement with a regional axis that is centered around Saudi Arabia, Egypt, the UAE and Jordan, while the Hamas movement was operating within the Doha-Ankara-Muslim Brotherhood axis. Islamic Jihad emerged with a pure national agenda,” Abdo added.