The Popular Front for the Liberation of Palestine has launched rockets into Israel over the past few days while Hamas turns a blind eye. 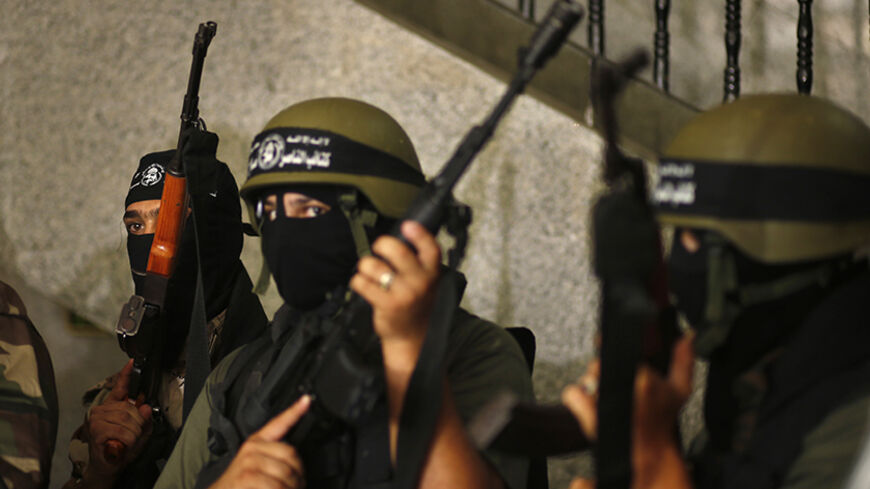 GAZA CITY, Gaza Strip — The situation in the Gaza Strip has escalated dangerously, raising concerns that another major conflict is imminent. Eight Palestinians were killed, six of them from Hamas' military wing the Izz ad-Din al-Qassam Brigades, and 10 were wounded following a series of strikes by Israeli warplanes over different locations in Gaza late on July 7 and in the early morning of July 8.

During the past few days, news has circulated about indirect communication between Cairo and Hamas to set up a cease-fire agreement in Gaza with Israel. A Hamas official confirmed to Al-Monitor on condition of anonymity that there has been no Egyptian brokerage for the truce and that “Egypt has distanced itself this time.”

In previous statements, Hamas leaders had set the lifting of the blockade in Gaza as a condition for any truce. However, this has yet to materialize.

“We agreed with the factions during a meeting held two days ago not to launch missiles, but 20 missiles are launched every day. Therefore, it seems that some parties have breached the agreement,” the Hamas official said.

“These missiles undoubtedly provoke a crisis, but Israel knows that Hamas is the side that controls things. After the murder of Palestinian teenager Mohammed Abu Khdeir, who was burned alive by three Israelis, two of whom were settlers, the pressure has increased. So we are disregarding these missiles,” he confirmed, adding, “Hamas can face the war militarily as an organization, and it has capacities. It has developed its defense forces and missiles more than before. There won’t be a war, but there aren’t any initiatives to solve this escalation soon.”

Khaled al-Batsh, a leader of the Islamic Jihad movement, told Al-Monitor after the meeting of the factions in the movement’s headquarters that he disagreed with the Hamas official. He clarified that the meeting was not for the factions to agree to the truce, but to discuss the salary crisis and the failure to implement the reconciliation provisions.

“The Islamic Jihad movement has not claimed responsibility for the missile launching, and there is general consensus among the factions in the Gaza Strip. However, there hasn’t been any agreement on a cease-fire so far, and the factions have the right to defend themselves from the persistent Israeli attacks. We affirm the importance of the Egyptian role and Egypt’s previous and future efforts to support the Palestinian cause. The current tensions push us to demand reform of the relationship between Hamas and Egypt, which will not give up its historical role to stop the Israeli aggression,” Batsh said.

On July 6 the Israeli army tweeted, "Over 150 Gaza rockets have hit Israel in less than a month."

The rockets fired from Gaza in recent days have largely been the work of the Popular Front for the Liberation of Palestine (PFLP), its spokesperson Abu Jamal told Al-Monitor. He said the armed wing of the PFLP's "missiles during the past few days were part of their duty to defend the people and land. They did not constitute a form of reactive resistance, rather a strategic one until the end of the occupation. … Everybody knows that the enemy is ahead of us on the technological level. That’s why we are being extremely cautious. We often launch the missiles and leave the place within seconds.”

“We reject the truce or any collusion with the enemy under this condition. All we heard in the past two days was that the enemy is going after the truce. We didn’t give any written or oral consent, and we will not seek any direct or indirect negotiation under the continuing aggression on Jerusalem, Gaza and the West Bank cities. Any current truce would isolate Gaza and allow the occupation to take over the West Bank and Jerusalem. We reject this,” he said.

Regarding the coordination on the ground, Abu Jamal said that the PFLP does not work independently of other factions.

When asked about the coordination between armed brigades, their spokesman Abu Abida told Al-Monitor, “Of course we are not alone. The resistance in all its forms is united on the ground. We agree with the factions and forces, and there is a high level of organization among us.”

When asked about his stance on the missiles that were launched from the Gaza Strip and breached the truce, he answered, “The occupation breached the truce, and you can all hear the daily shelling. Izz ad-Din al-Qassam Brigades are well aware of the field situation, and they are directing the battles in the way they see fit. The Palestinian people have the right to face the Israeli occupation with all their power and tools. [Israeli forces] are the ones breaking the truce, not us.”

The Popular Resistance Committees also asserted that Gaza’s main armed factions are working together. Al-Monitor met with the spokesman for Nasser Salah al-Din Brigades of the Popular Resistance Committees, Khaled al-Azbat. “There is no truce or Egyptian brokerage. It is a big conspiracy against the Gaza Strip, targeting the first-rank leaders of the resistance,” Azbat said.

“As long as there is Israeli aggression in the Gaza Strip and West Bank, there will be an organized response from the factions, and it doesn’t have to be declared,” he added.

He also confirmed, “The military wings are following a unified approach. The factions will be ready for any future battle. No meetings have been held to stop the missiles.”

As Gaza’s factions prepare for war, Gaza’s inhabitants, who hear the terrifying Israeli strikes, hold their breath each time a missile lands. They might be able to bear a war, but they do not wish to.