Israel’s withdrawal of ground forces, and focus on air power, gave it the upper hand in pressuring the Palestinian resistance factions to a truce. 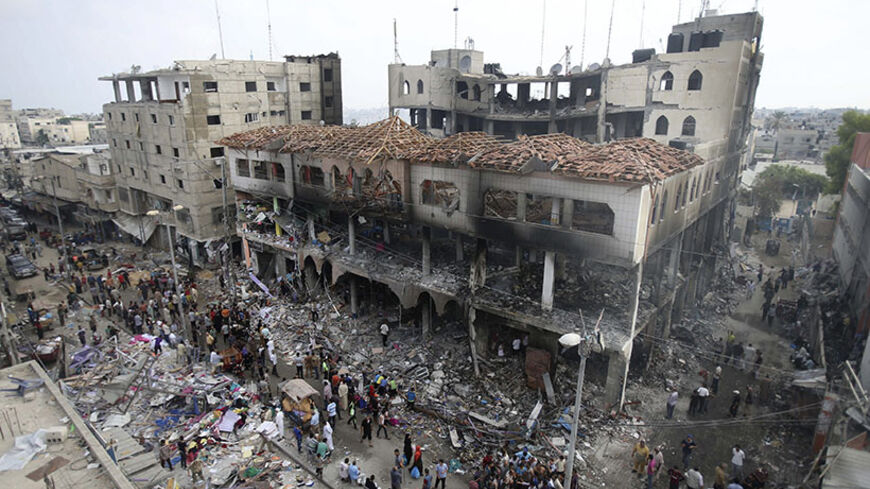 Palestinians gather around the remains of a commercial center in Rafah in the southern Gaza Strip, Aug. 24, 2014. - REUTERS/Ibraheem Abu Mustafa

GAZA CITY, Gaza Strip — Men, women and children went out on the streets of the Gaza Strip, a few minutes past 7 p.m., after the 51-day war was finally over. Hundreds gathered in the streets, raising Hamas and Islamic Jihad flags, while a few raised the flags of Fatah and the Popular Front for the Liberation of Palestine.

Hala, a little girl, sticks her head out of the car and cheers, “Izz ad-Din Brigades!” Other men and women cheer joyfully celebrating the war’s end, while patriotic songs blast through speakers and “Allahu Akbar, Allahu Akbar, the resistance has won,” can be heard from the mosques’ loudspeakers.

This remains a historic moment even though the citizens describe it in different ways. Um Fayez, 45, says, “It is a victory day,” as she thanks God. “Soon, we will celebrate the liberation of Jerusalem, but we will never forget the martyrs,” she says as her voice weakens, and she starts crying.

This is how Aug. 28 ended. However, its beginning was completely different and Gazans were traumatized as Israeli forces targeted two residential buildings — the Italian Complex and Basha Tower — in the early morning hours, in the most vital areas of Gaza.

The headquarters of Sawt El Shaab radio station in Basha Tower, as well as several other press offices, turned into rubble. The radio station’s editor, Shady Abu Shadak, spoke with Al-Monitor as he was standing in front of the destroyed tower, which now blocked al-Salasini Street and other landmarks in Gaza City. “An officer from the occupation forces called the tower guard and told him to get everyone out because they were going to strike in 20 minutes. The guard delivered the news and we started calling all the families that had fled the north of the Gaza Strip and came to the tower, as well as all journalists, to leave the building and we ran as far as we could.” He added that the aircraft launched two guided rockets and then shelled the building right in front of their eyes as they stood there traumatized and helpless.

The Italian Complex in al-Nasr neighborhood is considered one of the highest towers in Gaza. Part of the tower is still standing, although the Israeli aircraft shelled it six times.

Tareq Abu Hassan, an eyewitness and owner of one of the shops in the complex, told Al-Monitor, “We did not believe they were going to strike the tower. When they called a resident and threatened to shell the tower, we did not leave until the first guided rocket was launched.”

He added, as he searched through the rubble of his shop for any usable furniture, “We used to think that this was the safest area during the war. Look at how it turned into a nightmare now, especially since there is still an unexploded rocket here.”

The war took a different course during its last four days. The aircraft started targeting middle- and upper-class neighborhoods, where hundreds of families had fled from the bordering neighborhoods of Shajaiya and Beit Hanoun, thinking it would be safer here.

F-16 jets first launched two rockets at the foundations of the 14-story tower, Zafer 4, in the modern neighborhood of Tal al-Hawa. The shelling occurred in broad daylight on Aug. 23, and no Gazan could ever forget the image of it crumbling.

Political analyst Akram Atallah sees the targeting of residential towers as a wakeup call for the Palestinians to realize what Israel is capable of doing and as a message from the enemy to show that they are ready to carry on with the war even if this would lead to the destruction of Gaza. He told to Al-Monitor, “The destruction of the towers did not affect the battle as much as it affected Palestinian public opinion.”

The resistance factions launched rockets and mortars by the hundreds every day toward the Israeli cities bordering Gaza. However, the ground mission through the tunnels, which the resistance was executing during the first month of the war, decreased after Israel withdrew from the ground and focused on airstrikes.

In the context of an analysis of the battle’s change of course, Atallah told Al-Monitor, “When the ground battles stopped, Israel started to regain the upper hand on whether to agree to a truce or not. This affected the Palestinians and the resistance factions’ morale, especially since the factions sort of relaxed during the 12-day truce after it had resorted to a political solution to protect as many lives as possible.”

Atallah thinks that after the 12-day truce, Israel started preparing for a major ambush, pushing the clashes to become more violent than ever, in addition to assassinating the southern leadership of the Izz ad-Din al-Qassam Brigades. He added, “The fact that Israel received such accurate information concerning Qassam leadership, allowed it to gain ground in the battle.”

Atallah confirmed that impressions changed after that moment; Israel was more prone to use aircraft and it multiplied its strikes, which led to the decrease of the resistance’s rockets number and range, as the battle dragged on and reinforcement potential weakened.

He said, “This had political repercussions. At the beginning of the war, the resistance was refusing the truce, while saying that it would only agree to it under strict conditions. But in the end, Israel became the decision-maker in the truce agreement.”

Both Islamic Jihad and Hamas leaders went on air for the first time since the beginning of the war, an hour after the cease-fire was announced, to declare the resistance’s victory and the war’s end with their conditions met.

Atallah believes there is no right or wrong in politics. Hamas gained a few points in the war, but Israel also gained some. He said, “It is all relative. When Israel carried out the ground operation, coffins were being sent out to Israel on a daily basis. However, after the ground withdrawal, there were no coffins anymore, which made people sense that the resistance was witnessing a setback, after initially advancing.”

Minutes before the cease-fire, Hamas announced the death of two Israeli soldiers, while Israeli media said they were civilians. “The death of these Israeli soldiers shows Israel’s failure in achieving the goal it had set for itself at the beginning of the war, which was eliminating the rocket launching. This is how the curtains were closed over the final moments of Israel’s failure and the resistance’s victory,” Atallah said.