The first day of Eid was canceled for Gazans as people try to cope with having lost family, homes and their livelihoods to the wave of attacks between Gaza and Israel. 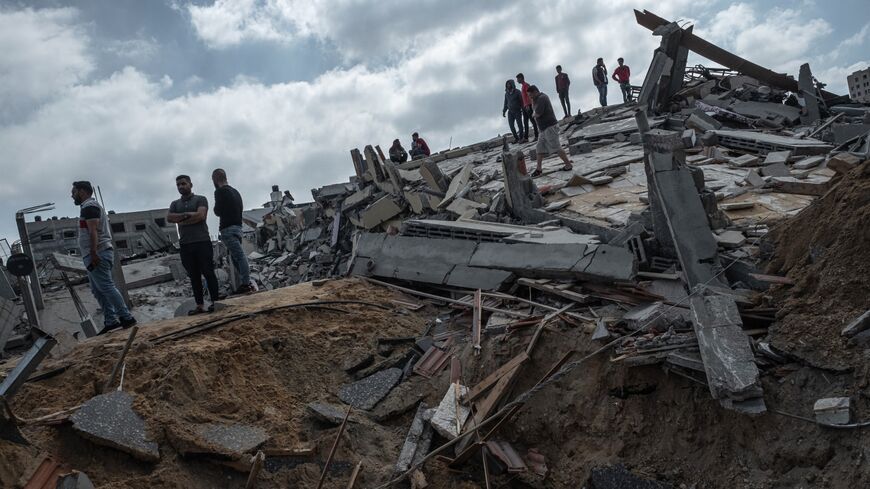 GAZA CITY, Gaza Strip — On the first day of Eid on May 13, when people were supposed to be flocking to prayers in the early morning, the sounds of praise for God ("Takbir") clashed with the sounds of airstrikes launched from Israeli aircraft, which have not left Gazan skies since May 10.

At dawn May 13, Abu Mohammed al-Madhoun, 60, could no longer contain himself and broke out in tears, crying, “Ya Allah, Ya Allah!” (Oh God, Oh God!) as he searched for the bodies of relatives and neighbors under the rubble of buildings leveled by Israeli military strikes on the Sheikh Zayed residential neighborhood in the north of the Gaza Strip.

Neighbors pulled out the first two bodies — Abdul Rahim Mohammed Madhoun, 63, and his wife, Haijar Abu Sharkh al-Madhoun, 60, from under the rubble.

When Abu Mohammed al-Madhoun returned from the funeral procession and burying them in a cemetery, he went back to search for more victims. He told Al-Monitor, “I buried my cousins, and I am now searching for the other bodies under the rubble.”

After a 12-hour search aided by heavy government equipment, Abu Mohammed al-Madhoun and others found the bodies of the al-Tanani family — wife, husband and four children.

A group of young volunteers helped rescue members of the al-Malfouh family and transferred them to the Indonesian Hospital in the north of the Gaza Strip.

The Tanani and Malfouh families had been renting apartments in the building Abu Mohammed al-Madhoun owns.

The Israeli military’s warning calls were not enough to avert the massacre. Abu Mohammed al-Madhoun said, “The Israeli army called a neighbor … at approximately 2 a.m. and told him he had a minute and a half to evacuate the neighborhood. We did not have enough time. The strike happened before my cousins and their children could leave the house. They were killed, and we pulled them out from under the rubble.”

He added, “We are tired of this war. I don’t know what more will happen after all this killing. I have to search for the rest of my family and take care of them.”

Officials said May 14 that at least 119 people, including 31 children and 19 women, had been killed this week in Gaza.

Sadness and pain cast a shadow over Gazans’ homes, and, contrary to the yearly tradition, Eid al-Fitr celebrations marking the end of the Muslim holy month of Ramadan were nowhere to be seen.

Sabah Zakaria, 40, lives in a one-story house in Hay al-Zeitoun in the south of the city of Gaza, where mid-level residential buildings are close to each other because of the strip's population density. When shells began hitting nearby agricultural land used to launch rockets, she left her house and ran to a neighbor’s.

She told Al-Monitor, “We left the house because of the intense shelling nearby. Suddenly, the agricultural land adjacent to our house was targeted, and the house caught fire.” She said it burned down.

Sabah consequently moved into the home of a relative in Gaza city. She said, “We knew this Eid would be difficult because of the massive destruction and the high number of casualties. But we had prepared to celebrate, even if modestly, at home. The dress I had prepared to wear that day was set ablaze.”

She added, “We were hoping the escalation that is akin to war would end on the day of Eid. The raids are worse than those launched in the 2014 war.”

Joy was absent from the streets and houses on the first day of Eid al-Fitr in the Gaza Strip due to the ongoing raids from Israeli military aircraft. Their airstrikes targeted key buildings used by the de facto government in Gaza to conduct business, such of the Interior Ministry and banks used to pay employees’ salaries.

In recent days, the Israeli military destroyed three residential towers in the Gaza Strip with rockets. On May 12, the 14-story Al-Shorouk tower on Omar al-Mukhtar Street in the center of Gaza city was targeted, even though it houses residential apartments as well as corporate offices and media institutions.

Also May 12, Israeli aircraft destroyed large parts of the Al-Jawhara tower on Al-Jalaa Street in the center of Gaza city. The nine-story tower houses residential apartments and several offices, and its shelling caused huge damage to nearby facilities.

On May 11, the residential 13-story Hanadi tower was destroyed.

Amer al-Nakhal, 30, told Al-Monitor, “The magnitude of destruction of the airstrikes on residential towers is huge. The streets look different, and the devastation reached the nearby areas. Gaza now needs total reconstruction for life to return to normal.”

Nakhal owns a renowned outlet selling modern clothing in the Rimal neighborhood, which has been a buzzing area and a central market for a number of goods that Gazans need. On the second day after the shelling of the Al-Shorouk tower, he went to check on his merchandise, “I was shocked by the amount of destruction. This war has stolen the last of our hopes. I had invested all my capital to buy merchandise and equipment for the shop. They have been completely damaged.”

He added, “I do not think there is a safe place in Gaza, and I do not think life will be back to normal. I have repaired my shop repeatedly, but this time, I will seek a way out of Gaza. Migration is better.”

The Khazendar structure facing Nakhal’s shop was shelled and leveled in the escalation between Hamas and the Israeli army in 2019. He restored his shop and in March worked on improving the store's decor in preparation for Eid. He said, “I have barely finished paying for the previous repairs. I have wasted my life restoring the destruction left by the conflict. I had better search for another place to invest in and live.”

Nakhal and other shop owners have undergone tough economic circumstances due to the COVID-19 pandemic and the strict Hamas lockdowns in Gaza. The economic situation deteriorated further, and now, “We have missed the Ramadan and Eid sale season, and we have lost our shops. Even if we want to move elsewhere, the busy Rimal area is now ravaged.”

In the north of the Gaza Strip, in Beit Lahiya, Leila Abu Nada, 34, feared for her three young daughters. They had been startled by the shelling of empty agricultural land nearby. She said, “I haven’t seen such escalation since the 2014 war. Around 20 Israeli rockets were launched consecutively. The children were hysterical with fear. I was anxious, and I tried hard to control my daughters’ fear.”

She said, “I have a 9-month-old daughter who cannot sleep more than 10 minutes without crying. My other daughter is 8, and the third one is 10. If I do not hold their hands, they do not dare move around the house.”

She added, “I try to draw in notebooks with them, but they only doodle explosions and aircraft shelling places, bloodshed and neighbors’ wounds, which they saw with their own eyes.”