Hamas warns Gazans have 'nothing to lose'

The deadlock remains in Cairo, as Israel refuses to budge on Hamas’ demand to lift the siege and the Palestinian group, warning it will return to the battlefield if no progress is made. 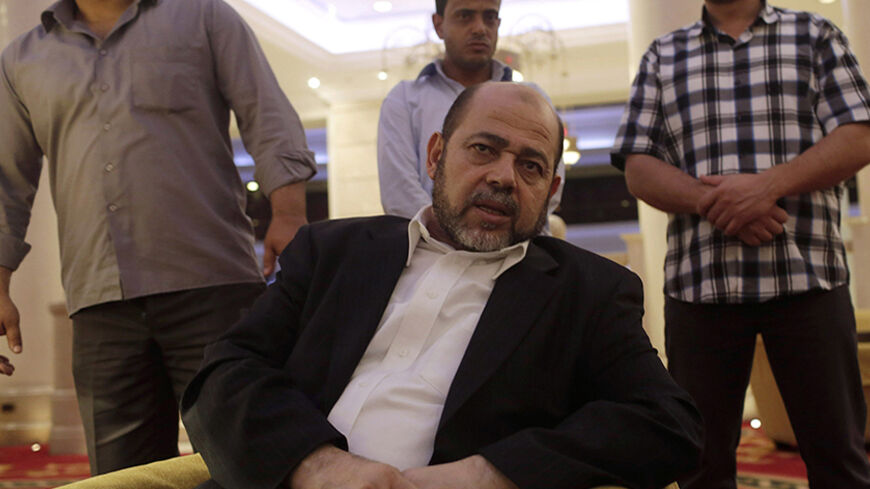 Hamas reluctantly agreed to a new, 72-hour cease-fire proposed by Egypt, starting Aug. 11, after the first truce expired on the morning of Aug. 8, but much to the angst of its rank and file who are adamant to lift the Israeli siege on Gaza.

Izzat al-Rishq, a member of Hamas’ political bureau, who is participating in the talks, told Al-Monitor over the phone, “The Palestinian delegation agreed to the new truce after the Egyptian mediator told us that Israel had agreed on it to resume the negotiations. The Israeli delegation had arrived in Cairo without any previous conditions — [as] it had tried to impose in the past — and it had started the continuous negotiations to answer our people’s demands and rights, after our delegation had presented what the Egyptians offered us. Israel is dodging the issue, trying to waste time and escape its responsibilities. It is held responsible for not being able to reach an agreement yet.”

A Hamas official told Al-Monitor, “The movement has a wide range of options that should not be limited to either extending the truce or renewing the clashes with Israel. When we refused the extension of the cease-fire, we did not fire rockets at Israel as much as we did during the days of war. [Izz ad-Din] Al-Qassam Brigades only intervened at the last minute while the other factions continued to fire rockets at a slower pace, since Hamas wished for the negotiations’ success.”

Despite the cease-fire, negotiations don’t appear to be advancing, a PLO member of the delegation told Al-Monitor over the weekend. According to Mousa Abu Marzouk, a Hamas leader who is participating in the talks, the negotiations are failing because Israel has not responded positively to the Palestinian humanitarian demands. “The Palestinians have nothing to lose,” Marzouk said. “They will either die under the siege or under Israeli shelling. The delegation did not sense a true seriousness from Israel in the negotiations, since it is still stalling to answer to the Palestinian demands.”

Al-Monitor learned that the Palestinian delegation remained in Cairo to attend an urgent meeting in the Egyptian capital for the Arab League’s permanent delegates on Monday, Aug. 11, to discuss ending the Gaza war.

An Egyptian official closely following the negotiations told Al-Monitor, “Egypt cannot allow the failure of its efforts in reaching a permanent cease-fire, despite the major obstacles standing in its way, as the alternative would be going back to the bloodshed in Gaza. The Egyptian diplomacy is trying to make both the Palestinian and Israeli parties compromise on their exaggerated demands to reach a cease-fire, or else the negotiations will stay suspended since both parties refuse to fulfill the demands of the other party.”

However, Hamas spokesman, Fawzi Barhoum confirmed that the movement is not going to compromise on its demands, saying, “There is no going back. The resistance will continue with full force. We either have our demands fulfilled or we go to war.”

The deputy secretary-general of the Democratic Front for the Liberation of Palestine and member of the Palestinian delegation, Qais Abdul Karim, said in a news conference, “Israel did not provide the Palestinian demands with convincing answers. It kept going around this vicious cycle, under the title of organizing the siege on Gaza, instead of lifting it. Israel did not express any seriousness in the negotiations. Instead, it tried to propose what is even less available at the moment, specifically concerning the [border] crossings.”

What is noteworthy about the negotiations is the announcement made by Izz ad-Din al-Qassam Brigades’ military spokesman, Abu Obeida, on the evening of Aug. 7. He spoke about “not ending the current clashes without truly lifting the siege on Gaza, and building a seaport,” demanding the delegation “not to extend the cease-fire agreement unless Israel initially approves on building the seaport, or else, we will make Israel face some tough decisions, through a long war of attrition. We will drag it into an extensive ground war, where we will kill thousands and imprison hundreds.”

However, a Palestinian official from the Palestine Liberation Organization (PLO) delegation in Cairo told Al-Monitor, “The negotiations are complicated and not at all easy. This is why it is unnecessary to have preconditions on whether the negotiations would succeed or fail, including talks of a seaport or an airport, as long as we have demands concerning the lift of siege on Gaza. The negotiators have the ability to achieve this goal, without being limited to specific conditions, which would make the negotiations fail in the event that they do not fulfill them.”

Egyptian circles suggested that the negotiations would be a success despite their complexity. However, Israel explains its rejection of the three Palestinian demands — the seaport, the airport and the passageway between Gaza and the West Bank — by saying that it wants to prevent certain factions from smuggling weapons, and that the seaport and the airport are a threat to its security. Israel’s answers so far do not explicitly indicate a lift of the siege. They are rather empty statements that do not fulfill the Palestinian demands.

A member of the PLO delegation told Al-Monitor, “There are slow developments in the negotiations with Israel concerning the opening of the crossings in Gaza.” He also mentioned that the Palestinian delegation held an exceptional meeting on Aug. 10, “to discuss the operational mechanisms of the expected agreement. The discussions will specifically handle the issue of activating the role of the consensus government to discuss the future of the crossings and borders as well as managing them within the Palestinian Authority. This would be the one condition for obtaining both the Egyptian and the Israeli approval.”

On the field in Gaza, Hamas did not really welcome the new truce. According to Al-Monitor’s random survey on the opinions of Hamas base leaders, many expressed their concerns about “the extension of the humanitarian truce being a first step to cooling the clashes down, then having the members resistance relax. This would flush the Palestinian demands down the drains of the negotiations, which would take even longer and result in depriving the resistance from its political aspect.”

A Hamas leader and member of the delegation in Cairo told Al-Monitor, “This second truce with Israel is going to be the last. We will not have to go under new pressures to extend it. By the end of this three-day truce, we will have to face our political options: We either achieve an honorable political accomplishment for our people, or we close the page on the negotiations and search for alternatives on both political and field levels to face Israel.”