The cease-fire between Israel and Hamas was announced after heated exchanges between the Egyptian and Hamas delegations during negotiations in Cairo, where Hamas reluctantly accepted Egypt’s demand for a cease-fire without preconditions. 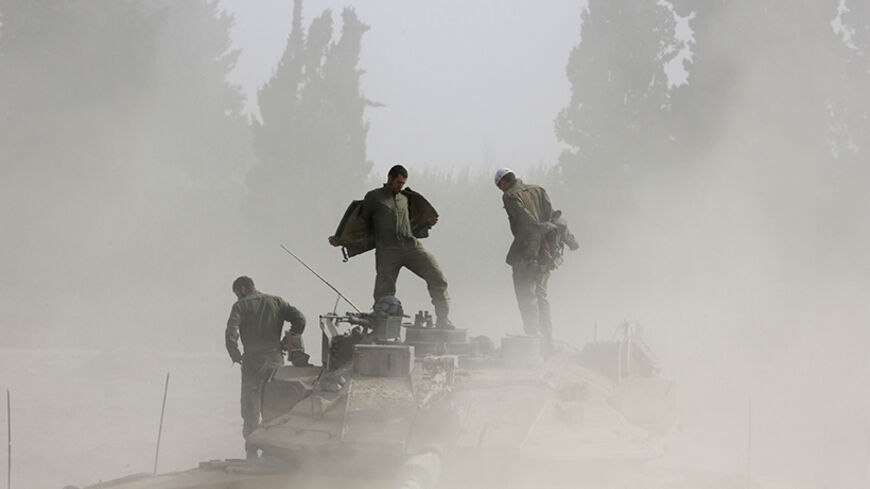 Israeli soldiers take off their jackets as they stand atop a tank after returning to Israel from Gaza, Aug. 5, 2014. - REUTERS/Baz Ratner

A cease-fire was finally reached between Hamas and Israel on Aug. 4 in the wake of Egyptian intelligence negotiations with the Palestinian delegation.

Izzat al-Rishq, member of Hamas’ political bureau participating in the Cairo negotiations, told Al-Monitor that the movement “approved of Egypt’s call for a 72-hour cease-fire, as of 8 a.m. on Aug. 5 and of the launch of indirect negotiations regarding the truce conditions, based on the demands agreed on among the Palestinian delegation and presented to the Egyptian side.”

An Egyptian official close to the negotiations told Al-Monitor that the United States pressured Israel, while Qatar and Turkey pressured Hamas to agree to the cease-fire. “Public and secret efforts preceded the call for a cease-fire, and there was pressure on all parties to reach this stage, which might put an end to the raging war. The UN and the US administration have played a role to influence Israel, as did Qatar and Turkey with Hamas. Moreover, the battlefield in Gaza has madly flared up, which means that the alternative would be a new wave of actions and reactions and more victims.”

Ismail Haniyeh, the deputy head of Hamas' political bureau and former Gaza prime minister, said in a speech on the evening of Aug. 5, “Hamas has shown great responsibility in dealing with the political actions and has communicated with Qatar, Turkey and Egypt to stop the aggression and lift the blockade to serve the optimal political purpose and to reach an end worthy of the sacrifices of our people and the performance of our resistance in a way that does not overlook the sacrifices offered by Gaza. The enemy will not get through politics what it failed to achieve in the battlefield.”

Al-Monitor spoke to an Egyptian official who followed the negotiations through meetings that took place to get Hamas to agree to the cease-fire. “Before the cease-fire was declared, arduous meetings took place in Cairo between the Egyptian intelligence and Majed Faraj, the head of the Palestinian intelligence, on Aug. 3, with the arrival of the Hamas delegation from Doha. Upon its arrival, the delegation met with Egyptian officials on the same day, but the most serious meeting was held with the head of the general Egyptian intelligence, Mohammed Tahami, on Aug. 4. The latter asked Hamas and the other Palestinian delegation members to accept the Egyptian initiative as it is; all the while understanding some of their [members’] amendments,” the official said.

A member of the Palestinian delegation outside Hamas, who participated in Tahami’s meeting, told Al-Monitor that “heated discussions” took place between the Egyptian and Hamas delegations. “The meeting was neither friendly nor bad. It was straight to the point and detailed the demands presented by the Palestinian delegation as a united entity. The Egyptians seemed insistent on a cease-fire without preconditions. As a result, the discussions with the Hamas delegation became heated. In the end, an agreement was reached.”

The Palestinian factions handed over a unified document of demands that included opening the crossings, removing the buffer zones imposed by Israel with Gaza, lifting the sanctions against the West Bank citizens and rebuilding Gaza.

Rishq told Al-Monitor, “The Palestinian stance is united to reach an honorable agreement that fulfills the demands of the people after all these sacrifices. We will not let Israel off the hook. Any final agreement for the cease-fire should also break the siege on Gaza and end the aggression.”

Perhaps what indicates the seriousness of the negotiations in Cairo regarding a final cease-fire is the fact that two Hamas and Islamic Jihad delegations left Gaza on Aug. 5 through the Rafah crossing and headed to Cairo. They couldn’t leave on Aug. 1, due to the security situation following Israel’s violation of the humanitarian truce. The delegation included Khalil al-Haya and Imad al-Alami from Hamas and Khaled al-Batsh from Islamic Jihad.

A member of the Hamas delegation in Cairo told Al-Monitor that Hamas was reluctant to sign, but agreed after Egypt successfully turned other members of the Palestinian delegation to its viewpoint. “Hamas did not encourage a cease-fire at first during the agreement on the details of the Egyptian initiative that did not offer any direct reward for the Palestinians in Gaza. Hamas preferred the UN-brokered truce to keep pressure on Israel. But, after Egypt insisted on its cease-fire request — rather than a truce — and convinced the other delegation members [of this], along with Israel’s escalating land and air raids and the hundreds of Palestinian deaths every day, Hamas had to cave in, after deliberating with its leaders locally and abroad.”

A prominent Hamas source in Gaza told Al-Monitor that the movement would have preferred “to wait before issuing a united Palestinian stance regarding the Egyptian cease-fire proposition. Individual stances had emerged on Aug. 4 and stated that the cease-fire agreement would be reached in the next few hours.”

However, Hamas’ response came late, at dawn on Aug. 5.

Al-Monitor learned from an official in the PLO delegation that “there were limited options proposed during the negotiations, and Hamas is running out of time and can no longer refuse the Egyptian initiative, whose amendments might be agreed on.”

Izz ad-Din al-Qassam Brigades issued a warning on Aug. 5 that the cease-fire will be temporary if the demands to lift the siege are not met. “The battle persists, and it will not end before the rightful demands of our people are fulfilled. The cease-fire is temporary and the behavior of the enemy will determine the course of the battle and its results. Our inclinations in the coming few days depend on meeting the expectations of our people, which we cannot undermine,” its statement read.

A Hamas official abroad elaborated to Al-Monitor on this statement, saying it was designed to reassure Palestinians that they will not give up on their demands, even if it means resuming the conflict.

“The Palestinian street is concerned that there isn’t enough immediate regional and international desire to fulfill these demands as punishment for Hamas and Palestinians for standing their ground. Al-Qassam’s statement is a warning against such concerns, which reflect a costly scenario that the movement is trying to deal with,” the official said.

“The Palestinian people have resiliently stood by the resistance in the days of war. They deservedly expect us to compensate for the martyrs, the wounded and the houses they lost by fulfilling the demands we submitted, including lifting the blockade. The movement is deploying efforts with everyone to expedite the process, but it is not alone in this. Alongside Hamas, a united Palestinian delegation is collectively handling the fulfillment of these demands. If there was any slackening in this regard, take heed that we have not put our weapons down yet.”