Hamas dropped its insistence on an airport and seaport, but approved a final cease-fire that included the lifting of the siege. 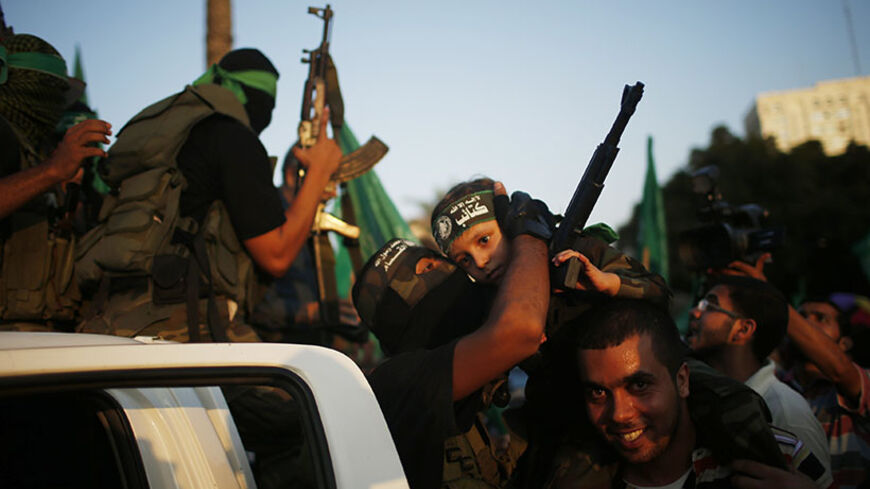 Finally, the people of the Gaza Strip have achieved what they have been hoping for over the last 50 days of suffering, killing and displacement. On the evening of Aug. 26, at a news conference in Gaza City, attended by Al-Monitor, Hamas announced that they had reached a cease-fire agreement with Israel. The movement considered it a victory for the Palestinian people and the resistance, stressing that the truce agreement ensures the majority of the current Palestinian demands.

The announcement of the cease-fire came as the Palestinian Ministry of Health in Gaza said that the total number of victims of the latest Israeli aggression in Gaza had reached 2,142 dead, including 577 children and 102 senior citizens, in addition to more than 11,066 wounded.

In a televised address on the evening of Aug. 26, Palestinian Authority President Mahmoud Abbas announced the cease-fire beginning in Gaza at 7 p.m. He directed thanks at Egypt, which sponsored indirect negotiations, and then called for “working to meet the requirements and needs of our people in Gaza, and providing all the medical supplies and services they need." Abbas then called on the international community and the UN to send supplies as soon as possible.

But what happened in those last hours to make the truce agreement a reality on the ground?

Al-Monitor learned about a dramatic development in the truce negotiations from a well-informed Hamas source. "A Hamas delegation arrived in Cairo suddenly, coming from Doha, on the evening of Aug. 25. It included Mousa Abu Marzouk, the deputy head of the political bureau, and Khalil al-Haya, a political bureau member. They had full authorization from the Hamas leadership to complete an agreement on the remaining details of the truce terms and to sign the agreement. This is what expedited [the agreement to] its completion during the past 24 hours," the source said.

On the evening of Aug. 26, the Egyptian Foreign Ministry announced that the Palestinian and Israeli sides had accepted Cairo's call for a cease-fire.

According to what was announced by Cairo, the agreement stipulated: "Opening the crossings to ensure the lifting of the siege on Gaza, abolishing the buffer zone east of Gaza, expanding the fishing area in the sea, carrying out reconstruction and bringing in the materials necessary for this, [and] discussing all deferred issues within one month of the comprehensive cease-fire."

A Hamas official told Al-Monitor, "The new aspect of the cease-fire agreement is that it clearly relies on the understandings of the Cairo Agreement in 2012. This is what the movement has insisted on throughout previous negotiating rounds, yet Israel had avoided it. [What else is new] is that it stresses a comprehensive and mutual cease-fire. This means it prevents Israel from taking the lead in any future aggression on Gaza whenever it wishes. In addition, the movement was able to rally the unified Palestinian position, despite the protracted negotiations. This is a great national achievement that can be built upon in the future in the post-war stage."

Meanwhile, Marzouk revealed details of the cease-fire agreement by saying that the reconstruction of the Gaza Strip would be discussed during the conference to be held in Cairo next month, where all relevant parties would be invited. He noted that the consensus government would take full charge of the reconstruction file, stressing that Egypt was the sole guarantor of the agreement. Marzouk also explained that Israeli, European and US restrictions on the entry of funds to the Gaza Strip would be lifted, pointing out that one of the reasons for the delay in coming to an agreement was the policy of assassinations. He said that the agreement stipulates an end to the latter policy, freedom of movement and non-targeting of resistance members and commanders in Gaza.

Thus, immediately following the announcement of the cease-fire, a number of Hamas leaders came out in the streets in Gaza to participate in festivities celebrating the end of the war. They had stayed out of sight throughout the aggression for fear that they would be assassinated, especially since the Israeli army had demolished most of the Hamas leaders' houses — most prominently those of Mahmoud al-Zahar, a member of the movement's political leadership; Salah Bardawil, the movement's media official; Essam Daales, Ismail Haniyeh's adviser for economic affairs; and Ahmed Bahar, acting chairman of the Palestinian Legislative Council.

Yet, what was notable was the truce agreement's absence of any clear talk about preliminary approval to build a port in Gaza, contrary to what was demanded by the Izz ad-Din al-Qassam Brigades in its speech on July 8.

Al-Monitor spoke with a senior Palestinian official from the PLO delegation involved in the truce negotiations. "It was not wise to stipulate an agreement on constructing a port in Gaza as a condition for the cease-fire, especially since the unified Palestinian delegation had agreed on the general heading of 'lifting the siege without restriction' in specific terms. It was for this reason that the negotiations were prolonged and the war continued, and [with] additional victims and destruction. In the end, we returned to the primary heading we had agreed upon: lifting the siege and opening the crossings," he said.

Al-Monitor asked Izzat al-Rishq, a member of the Hamas political bureau who was part of the movement's negotiations delegation, about the Rafah crossing, and whether it was part of the truce agreement. He said, "The Rafah crossing was not part of the understandings with Israel, because it is strictly a Palestinian-Egyptian matter. There is an inclination to remove any problems that could prevent its permanent opening, especially after the establishment of the consensus government that is responsible in practice for the administration of the Gaza Strip."

As the agreement did not include approval in principle to establish the port of Gaza, does this mean Hamas is backing down? And what guarantees are there that Israel will remain committed to what was stated in the agreement? Rishq responded, "The cease-fire agreement did not achieve all of our demands, even though we worked toward this. This agreement is not the end. Our desire to achieve [an agreement] came from [a need] to relieve our people who were subjected to a grotesque Israeli aggression. We, as the political leadership, have a moral and national responsibility to put an end to this suffering in Gaza."

He concluded by saying, "We will work within the unified Palestinian delegation to achieve the rest of our rights in the next phase. We signed the agreement from a position of strength and the resistance maintains its finger on the trigger. But Israel learned a lesson not to return again to aggression, because it will not be a walk in the park. [There are] requests for assurances that the agreement is achieved from many states alongside Egypt, such as Qatar, Turkey and European countries."