Heavy clashes erupted in Rafah less than an hour after a humanitarian truce came into effect, resulting in the deaths of at least 70 Palestinians and the possible kidnapping of an Israeli soldier. 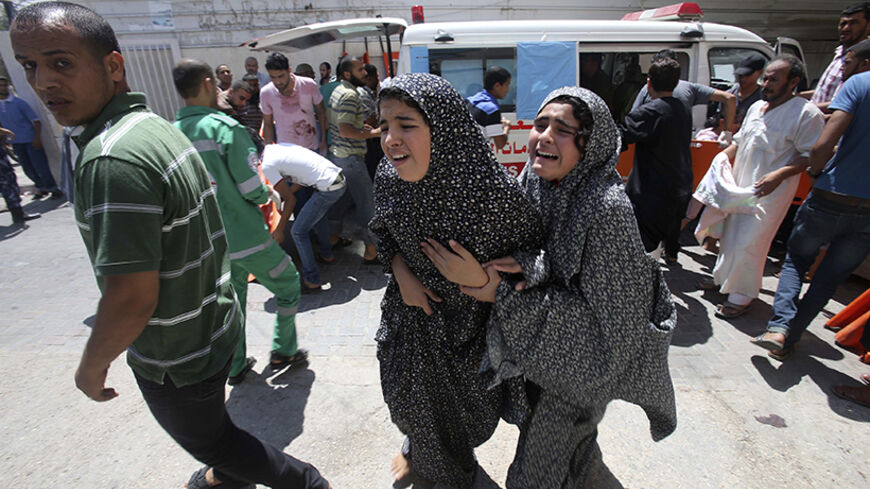 Less than an hour after the announcement of the humanitarian truce in Gaza on Aug. 1, violent clashes erupted between Hamas fighters and the Israeli army near the Karam Abu Salem crossing in the city of Rafah, south of the Gaza Strip. Ashraf al-Qudra, spokesman for the Ministry of Health, told Al-Monitor that 70 people have been killed and at least 300 wounded as a result of intensive Israeli bombardment by aircraft, artillery and warships that targeted several areas in eastern Rafah. The Israeli army expressed concerns that a soldier, Hadar Goldin, may have been captured during the fighting with Hamas' military wing, Izz ad-Din al-Qassam Brigades, this morning. Israeli media reported that his family has already been informed.

The escalation in Rafah comes after international diplomatic efforts succeeded in establishing a humanitarian truce in Gaza between Hamas and Israel for a 72-hour period, starting this morning, Aug. 1. The truce was meant to temporarily pause the war in the Gaza Strip while indirect negotiations take place in Cairo.

Al-Monitor learned that the Palestinian delegation will head to Egypt on Aug. 2 to start the indirect negotiations with Israel through Cairo. The delegation includes members of the Palestine Liberation Organization; Azzam al-Ahmad, a member of Fatah’s Central Committee; Majid Faraj, head of General Intelligence; Maher al-Taher, an official from the Popular Front for the Liberation of Palestine abroad; Qais Abdul Karim, leader of the Democratic Front for the Liberation of Palestine in the West Bank; and Bassam al-Salihi, the leader of the Palestinian People's Party. The delegation also includes members of Hamas’ political bureau; Moussa Abu Marzouk, Izzat al-Rishq and Mohammad Nasr from the movement’s leadership abroad; and Khalil al-Haya and Imad al-Alami from the Gaza leadership. Islamic Jihad is represented by Ziad al-Nakhala and Khaled al-Batsh.

A Palestinian minister in Ramallah told Al-Monitor on the evening of July 31, “The humanitarian truce was announced to pave the way for the Palestinian and Israeli negotiators to look into a permanent truce in Gaza and into an amended version of the Egyptian initiative, following Saudi and US interventions to convince Cairo to accept the amendments approved by all parties. I am expecting an official announcement of a truce at the beginning of next week.”

This announcement came after both sides publicly hardened their positions ahead of the cease-fire announcement. The news conference held by Israeli Prime Minister Benjamin Netanyahu on July 28 seemed to shatter all hopes of reaching an immediate truce, as he declared that the army still has long days ahead of it as military operations against Hamas in Gaza continue.

The cease-fire announcement also followed the remarks of al-Qassam Brigades commander Mohammed Deif, who said in a July 29 statement aired on Al-Aqsa TV station that there would be no truce without the lifting of the siege on Gaza.

The cease-fire negotiations had reached a deadlock because of the divergent and uncompromising positions of the two parties. In a telephone interview with Al-Monitor, a Hamas official said, “Hamas has announced that lifting the blockade on Gaza must be concurrent with any truce with Israel, while the Egyptian initiative said that the conditions of the resistance will be met after the truce, whereby a cease-fire is immediately declared followed by a discussion on the outstanding issues.”

An Arab League official in Cairo told Al-Monitor by phone, “It would be very difficult to calm the situation in Gaza if Hamas and Israel stick to all their demands. US Secretary of State John Kerry tried but failed to bring the positions closer after he was accused by Cairo and Tel Aviv of adopting the positions of Qatar and Turkey, which are close to Hamas.”

This led the Israelis to regard Kerry’s plan as a lifeline for Hamas that showed an understanding of the demands of Turkey and Qatar, as opposed to the Egyptian plan.

Al-Monitor asked a political official from Hamas about the accuracy of claims that Kerry tried to market Hamas’ demands to Israel and Egypt. The official replied, “This is funny. Who would believe that the United States is willing to sell Israel’s security to the advantage of Hamas? What really happened is that Kerry tried, through his plan, to save Israel from its military fiasco in Gaza and from the possibility of reaching a point of no return. This is what we have learned from regional mediators that have met with Kerry.”

An Egyptian official with ties to Palestinian intelligence told Al-Monitor that Egypt wanted to see an end to the fighting in Gaza, but without preconditions. “This is why it is working with the PA [Palestinian Authority] and there are delegations going back and forth to Cairo and Tel Aviv. The situation does not allow imposing preconditions, as victims will keep dying.” The official said one party — a reference to Hamas — was responsible for imposing untenable conditions to start the truce negotiations.

Hamas was eager to ensure the support of other factions, which demanded that any truce includes an Israeli withdrawal from Gaza, the return of displaced persons to their homes and the evacuation of the wounded.

A Hamas official told Al-Monitor that a withdrawal of Israeli troops would be necessary for further truces, saying, “Any truce ought to include the withdrawal of Israeli soldiers back to their positions on the Gaza borders. The truce would also allow medical teams to retrieve Palestinian bodies from the border areas.”

Hamas internally concedes that Israel might not immediately lift the siege after a truce, but a position assessment of the situation, obtained by Al-Monitor, shows confidence that international actors will pressure Israel to revisit its blockade policy. The analysis read, “Hamas survived three weeks of aggression. The siege might not be lifted immediately after the truce, but Israel will not go back to this option in light of international and regional guarantees, and will not make the sole decision to open and close the crossings.”

Much attention has been paid to Qatar’s role in the negotiations, with a prominent Israeli official telling Al-Monitor that Tel Aviv was furious about Washington's support for the Qatari position.

On July 20, Hamas gave Qatar its list of demands for reaching a truce. Hamas’ demands included a complete lifting of the blockade by opening border crossings, operating the port, releasing prisoners and allowing the introduction of all goods, including electricity, fuel, building materials and all the needs of the Palestinians in Gaza. Doha delivered the list of demands to international parties, and Washington in particular.

A senior source in the Qatari Ministry of Foreign Affairs told Al-Monitor by phone, “Doha delivered the Palestinian demands to international mediators, particularly Washington, which found that these demands are valid. It is not a courtesy [on the part of Washington] to Doha at the expense of another party in the region, rather the will of the international community to stop the bloodshed in Gaza. Qatar has a wide network of diplomatic relations, through which it seeks to stop the aggression against Palestinians. It is also coordinating with Ankara, knowing that most parties have confidence in [Qatar and Turkey], which have large influence allowing them to realize tangible achievements.”

One of the members of the Palestinian delegation heading to Cairo told Al-Monitor in a phone interview on the morning of Aug. 1, “Al-Qassam Brigades have realized great military achievements against Israel in Gaza. So, we are hoping the negotiations in Cairo will lead to a long-term truce that is due to the heroic fighting. This falls on all Palestinian forces, not only Hamas, which insisted that the Palestinian delegation be united. This is what we are hoping for.”