Egypt has proposed that discussions of sea and air ports for Gaza be postponed until September, a move that is unlikely to receive a warm response from Hamas. 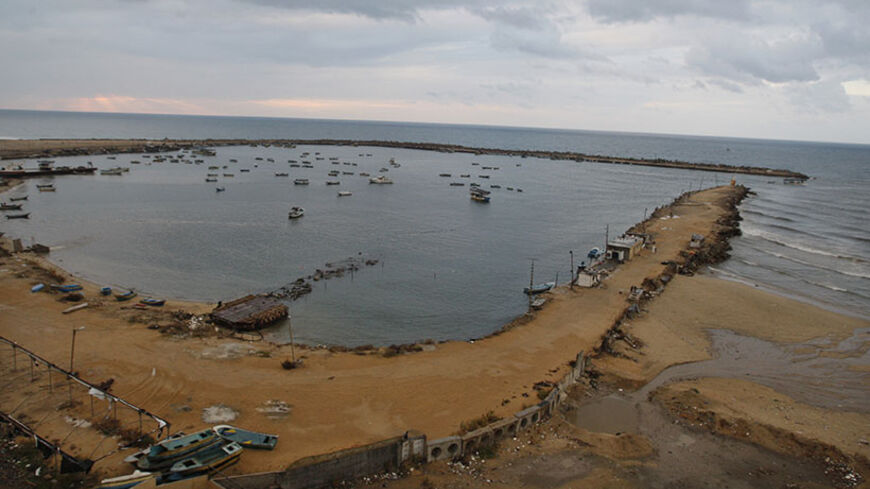 GAZA CITY, Gaza Strip — More developments have been taking place in Cairo to conclude a cease-fire agreement between Hamas and Israel. Al-Monitor has learned that Palestinian President Mahmoud Abbas may visit Doha in the next few hours to meet with the head of Hamas' political bureau, Khaled Meshaal. This is happening amid the faltering truce negotiations and Egypt’s inability to reach a final agreement on the cease-fire.

Al-Monitor also learned from one of the members of the Hamas delegation in Cairo, on Aug. 18, that the chances of reaching an agreement with Israel are dim, after Israel added a clause for the disarmament of the resistance in Gaza. This has brought the situation back to square one, which reinforces the chances of extending the truce, as Egyptians demanded.

The setback comes after some progress had been made in the previous round of negotiations that produced the five-day truce on Aug. 13, which is due to expire Aug. 18.

Izzat al-Rishq, a member of Hamas' political bureau and a participant in the Cairo negotiations, told Al-Monitor on Aug. 17, “During our negotiations in Egypt, some files were addressed, but many others are still pending. Although many, including myself, were not reassured with the extension of the truce, the conflict management requires wisdom, while maintaining focus on the goals and leaving the tactics to the resistance, including a temporary truce and others.”

Al-Monitor learned from an Egyptian source closely following the negotiations that before its announcement, “the recent truce was on the brink of failure on Aug. 13, in light of disparities between Israel and Hamas, which both refused to make concessions. The truce would have failed if it hadn’t been for the interference of regional and international parties, which pushed them [Israel and Hamas] to soften their positions and announce a new five-day truce.” The source was referring to a call made between US President Barack Obama and Israeli Prime Minister Benjamin Netanyahu on the night of Aug. 13, during which Obama pressured Netanyahu to reach a comprehensive cease-fire agreement.

Yet, the decision to extend the truce did not receive positive responses within Hamas’ popular base in Gaza. A Hamas media official told Al-Monitor, “The concerns we have regarding the extended truce are represented by Israel’s attempt to calm the military front and generate a state of ease among Palestinians in Gaza. That way, the return to the confrontation field becomes difficult, particularly since citizens have begun to return gradually to their everyday life.”

As soon as the Hamas delegation returned from Cairo on Aug. 14, and headed to Gaza and Doha to complete consultations, several statements were issued, saying that a truce agreement will not be reached unless the siege is lifted on Gaza, as former Prime Minister Ismail Haniyeh said. He expressed his support for the negotiating team to achieve a lasting truce agreement.

Al-Monitor learned from a leading Hamas source that “immediately after the Hamas delegation left Cairo, some of the political bureau members who participated in the negotiations went to Gaza, including Khalil al-Haya, Emad al-Alami and Ziad al-Zaza. On the other hand, Rishq, Mohamed Nasr and Mousa Abu Marzouk, deputy head of Hamas political bureau, headed to Doha, where all of Hamas’ board members met to discuss the results of the Cairo’s negotiations, and to take a final decision on a comprehensive cease-fire.”

The Hamas source added in an interview on Aug. 18, “When the delegation left Cairo on Aug. 14, a positive atmosphere prevailed regarding the ultimate success of the negotiations, after some of the files were addressed, such as opening the Rafah crossing on a daily basis, removing the buffer zone in east Gaza, expanding the fishing area in the Gaza shore from six to nine miles, releasing some prisoners from Israeli jails and facilitating the distribution of salaries to the Hamas government employees in Gaza. Meanwhile, issues such as the airport and the seaport are still suspended today, Aug. 18. Egypt had promised Hamas that these issues would be discussed in September after a comprehensive cease-fire has been reached.”

As of writing this article, Hamas had yet to give its final answer to Egypt’s proposal.

On Aug. 16, Hamas spokesman Sami Abu Zuhri reiterated Hamas’ position for lifting the siege. “The demands of the Palestinian people to reach a truce with Israel are represented in the end of the aggression, lifting the siege on Gaza, reconstruction and freedom of movement. Meeting these demands may bring us closer to a cease-fire agreement.”

Yet, Meshaal said in an interview with Al Jazeera on Aug. 16 that “Hamas’ demands are for a seaport and airport,” along with the other previously mentioned demands.

Palestinian sources said, “The files that have been addressed during the negotiations include the transfer of funds to pay Hamas’ employees in Gaza, while the seaport and airport files are still pending.” According to the sources, a solution was reached regarding the fishing issue, the opening of the crossings and the buffer zone.

Breaking from Hamas’ position, the Palestinian Authority (PA) agreed to Egypt’s proposal to postpone talks on an airport and seaport, according to a senior Hamas official. “Differences emerged among some members of the Palestinian delegation during the Cairo negotiations over the arrangement of the demands and their implementation, namely the PA’s approval to defer the talks on the Gaza airport and seaport, and Hamas’ refusal to postpone any talks on these demands. The meetings of Hamas’ political bureau, which ended on Aug. 16 in the evening, considered that these existing differences should not overshadow the need to reach an agreement with the PA, to achieve a unified position and prevent any division between them, even if this would obstruct a final agreement on all the demands.” He said, "Remaining united is a goal that we have sought for many years to achieve.”

In the meantime, a government official in Gaza told Al-Monitor, “Deputy Prime Minister Ziad Abu Amr met with ministry representatives from Hamas on Aug. 16. He informed them that the employees’ salaries will be paid without any obstacle at the earliest opportunity.”

For its part, Egypt has revised its proposal to make the PA, and not Hamas, a partner in the truce and reconstruction process. This implies a recognition by Israel of the consensual government that it previously opposed.

Regarding a potential failure of the negotiations, and the return to armed confrontation, the Hamas official said, “No one wants the return of the bloodshed of children and the displacement of people from their homes. Hamas has several options in its consultation with the Palestinian delegation, most importantly the need to save the blood of our people, and averting further Israeli aggression, knowing that this confrontation will not be the last between Israel and us.”