Hamas’ military wing fired dozens of rockets and mortars toward the Gaza Strip sea, which some believe to be a message to Israel regarding its annexation plans. 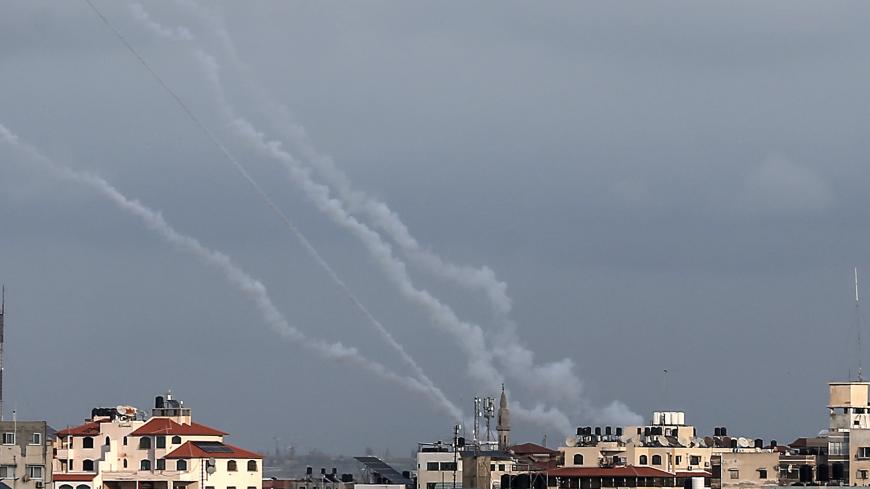 GAZA CITY, Gaza Strip — The Israeli government’s discussions to annex parts of the West Bank and the Jordan Valley in July have prompted mutual threats between Israel and the Palestinians. Most recently, on July 1 and 3, Hamas’ military wing, Izz ad-Din al-Qassam Brigades, fired 24 rockets and 20 large-caliber mortars toward the Gaza sea.

The rocket tests were heard across the Gaza Strip and lasted for several hours. Their ranges varied, extending to over 10 kilometers. This was the first time Hamas fired such a large number of rockets in the framework of testing.

The timing of the rocket test was no coincidence. Rather, it falls on the date that Israel had previously set to start annexing the Jordan Valley and parts of the West Bank. It has yet to do so in light of disagreements within the Israeli government and the objections of King Abdullah II of Jordan, with whom Israel has a peace treaty, and other regional and international leaders.

Prior to these tests, Izz ad-Din al-Qassam Brigades spokesman Abu Ubaida made a televised speech June 25 during which he considered the decision to annex parts of the West Bank and the Jordan Valley a declaration of war and threatened that the Palestinian factions would make Israel bite its fingers with remorse if it implemented this decision.

For his part, Israeli Prime Minister Benjamin Netanyahu threatened on July 2 to deliver a fatal blow to those trying to attack Israel. “The security challenges we face require constant anticipation. We are ready to defend ourselves by sea, air and land, as well as by setting up a barrier against tunnels along the borders of the Gaza Strip. … Anyone that tries to challenge us by carrying out violent acts will suffer a fatal blow,” Netanyahu said in a speech.

A Hamas military official told Al-Monitor on condition of anonymity that the rocket tests Izz ad-Din al-Qassam Brigades carries out from time to time are aimed at improving military capabilities to counter any Israeli plan to attack the Palestinian people, in light of the difficulty of smuggling weapons from outside the Gaza Strip.

The official refused to comment on Israeli media statements claiming that the recent tests aim to send messages to Israel in case the annexation takes place. “I will not comment on such statements. Our position in the event of implementing the annexation plan is clear, and we announced this in an official speech,” he said.

“We do not seek nor want war, but if Israel imposes it on us, we would not hesitate to fight back in defense of our people,” the official added.

Meanwhile, Abu Ataya, spokesman for al-Nasser Salah al-Deen Brigades, the military wing of the Popular Resistance Committees, told Al-Monitor that the rockets fired toward the sea are messages that the Israeli government needs to be aware of before proceeding to implement the annexation plan, warning that stronger messages could be coming across if Israel does not understand the message behind the recent rocket testing.

Ataya explained that the Palestinian resistance factions are united in the decision to respond militarily through the joint operations room — a military framework that includes all armed factions in the Gaza Strip established in 2018 to hold Israel responsible for any major war or military confrontation that may occur.

The Israeli media seems to have understood that Hamas' rocket tests are proof that the movement will implement its threats if the annexation plan is applied. Yedioth Ahronoth’s military reporter Elior Levy commented in a tweet on July 1, which he later deleted, saying, “Unusually, Gaza’s armed wings — Hamas, apparently — are firing rockets toward the sea at night, and this is a sign of their intentions should Israel declare annexing parts of the West Bank.” Meanwhile, the municipality of Ashkelon, in southern Israel, announced on July 1 its preparations to partially open shelters if rockets were launched from Gaza into the city.

On July 5, the Israeli army announced that two rockets launched from Gaza landed in an open field in southern Israel, while the Israeli Iron Dome intercepted a third rocket. The army responded by bombing what it described “as underground infrastructure belonging to Hamas” in eastern Gaza City. No casualties were reported.

Political analyst close to Hamas and former editor-in-chief of Felesteen newspaper Mustafa al-Sawaf told Al-Monitor that the rockets and mortars that Izz ad-Din al-Qassam Brigades fired on July 1 and 3 were messages addressed to the political and military leaders in Israel should they make the mistake of implementing the decision to annex parts of the West Bank and the Jordan Valley.

“The long-range rockets that were fired suggest that Hamas has rockets that can reach anywhere in Israel,” Sawaf noted.

For his part, military expert and retired general Yusuf al-Sharqawi told Al-Monitor that Hamas firing rockets and mortars aims to show Israel that it will indeed act on its threats should the annexation plan be implemented, and it aims to reassure the Palestinian street that the Palestinian factions have what it takes to deter Israel from carrying out its plans.

Sharqawi explained that Hamas is well aware the Israeli homefront is Israel’s weak spot and rocket attacks in any future confrontation will allow the movement to achieve military progress, especially since the large Israeli fortifications along the borders with the Gaza Strip by land and sea can hinder any future operations it may have been planning.

The last military confrontation between Hamas and Israel was in May 2019, during which the movement fired approximately 700 rockets in just two days on Israeli cities and kibbutzim near the Gaza Strip, and destroyed some homes in Ashkelon in southern Israel, thus showing, in practice, how developed the rockets it possesses are.

In recent years, Hamas and the Palestinian factions have focused their rocket tests on precision and destructive power, as well as to try and disrupt the Israeli Iron Dome, all of which they have achieved in varying proportions. Meanwhile, last February, Israeli military sources estimated that Hamas and Islamic Jihad possessed over 20,000 rockets at the time.