Why is Hamas test-firing missiles?

Hamas has recently intensified its test-firing of missiles in what experts say conveys a message to Israel whereby the movement is ready for war. 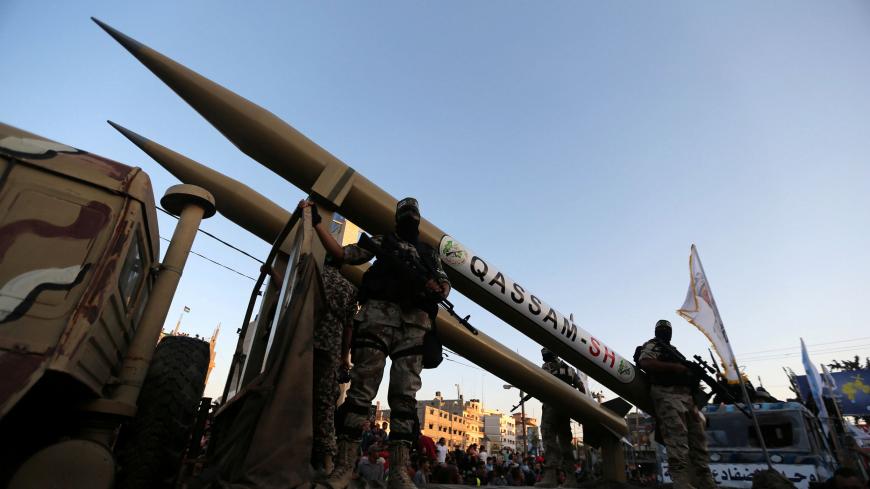 GAZA CITY, Gaza Strip — Izz ad-Din al-Qassam Brigades, Hamas’ military wing, has intensified its test-firing of missiles in recent months in the framework of developing its military capabilities. However, the timing of these tests conveys military and political messages, especially to Israel.

Most recently on July 3, al-Qassam Brigades launched 10 missiles of different ranges from the northern and southern Gaza Strip to the sea, a few hours before the Israeli Cabinet convened in the Gaza envelope in the presence of senior army commanders and Israeli Prime Minister Benjamin Netanyahu to discuss the stalled truce with Hamas.

After the meeting, Netanyahu threatened Hamas, saying, "Our policies are clear. We want the truce to go back to what it was, but at the same time we are preparing for a large-scale military operation, if it comes down to it. These are my instructions to the army."

The two sides made minor steps after the new truce agreement was reached June 28. Hamas and other factions reduced the firing of incendiary balloons toward southern Israel. Israel resupplied the Gaza Strip with fuel, expanded the fishing space for the Palestinians and returned 20 Palestinian fishing boats it had held for years.

However, the Palestinians found Israel’s steps insufficient. On July 8, Israel announced that it had intercepted a Palestinian helicopter heading toward southern Israel.

These tests, which have been the largest in recent months in terms of rocket numbers and ranges, have raised concerns among Israelis who heard loud explosions in the Gaza envelope. False alarms went off in Sderot near the northeastern border of the Gaza Strip during missile trials.

A military official in the Popular Resistance Committees told Al-Monitor on condition of anonymity that the missile trials carried out by Palestinian factions come within the framework of the continuous development of their military capabilities, which they have resorted to in order to overcome the difficulty of smuggling such missiles into Gaza.

He said that the resistance — Hamas, Islamic Jihad and the Popular Resistance Committees — is focusing in its recent test-firing of missiles on precision and destructive force while attempting to overcome the Israeli anti-missile systems, namely the Iron Dome defense system.

He explained that the Palestinian factions succeeded during the last round of escalation with Israel in early May to jam the work of the Iron Dome system, which could only intercept a few missiles; the Palestinian missiles were able to reach their targets accurately, causing losses in the targeted locations.

The Palestinian missiles that struck the city of Beersheba on Oct. 17, 2018, and the Sharon area north of Tel Aviv on March 25, as well as those that hit the city of Ashkelon on May 5, show how developed and accurate the missiles used by Palestinian factions, specifically Hamas and Islamic Jihad, have become.

Hamas’ artillery commander who goes by the alias Abu Moaz told al-Qassam Brigades' official website June 2 that the rate of missile firing during the last round of fighting with Israel in May was the highest in the history of confrontation between the two sides, as it witnessed the launch of 700 missiles in two days. Hamas, he said, was seeking to overcome the Iron Dome defense system, and it launched a new type of locally made S40 missile carrying large warheads.

Al-Monitor contacted Hamas political and military officials to comment on the recent test-firing of missiles, but none of them agreed to comment, arguing that military capabilities and experiences are confidential information they cannot share with the media.

Hamas and other Palestinian factions, such as Islamic Jihad, the Popular Resistance Committees and Al-Aqsa Brigades, have resorted to manufacturing domestic missiles to overcome the difficulty of smuggling missiles into the Gaza Strip, in light of the Israeli-Egyptian-US efforts to prevent arms shipments to the Gaza Strip from Iran or Libya via Sudan.

Hamas manufactured its first domestic missile in 2001 and continued to work on its missiles until it developed an arsenal estimated by Israel at 20,000 missiles. On Nov. 3, 2009, Israel detected the movement’s first test-firing of missiles toward the sea, which reached a range of 60 kilometers (37 miles). That same M-75 missile was used against Tel Aviv during the Israeli war on the Gaza Strip in 2012.

Hamas leader in Gaza Yahya Sinwar revealed May 30 that Hamas is developing its military capabilities thanks to the Iranian support it enjoys. Israeli military sources said May 17 that Hamas possesses an arsenal of high-quality, precision-guided missiles that had been manufactured by Iranian experts and that constitute a challenge for the Iron Dome defense system.

Amir Bohbot, military correspondent for Israel’s Walla news website, tweeted June 3 that Hamas’ test-firing of missiles conveys a message to Israel whereby “if no progress is made in the truce talks, we are heading toward confrontation.”

Israel and the Palestinian factions in the Hamas-run Gaza Strip have been engaged in 10 rounds of military fighting between August 2018 and May 2019, in light of the failure to implement the truce understandings. The factions have mainly relied on missiles of different ranges and sizes.

Wassef Erekat, a former PLO artillery commander, told Al-Monitor that Hamas' continuous test-firing of missiles conveys military and political messages whereby it is ready for any Israeli war on the Gaza Strip. They aim at showing that the Gaza blockade will not prevent the movement from developing its missile capabilities.

Israel usually conveys threatening messages to the Gaza Strip through military maneuvers, and Netanyahu threatened July 3 that Israel is prepared to enter a military battle in Gaza should the truce efforts with Hamas fail. So Hamas wanted to send its own message this time around.

Hamas military expert Rami Abu Zubaydah told Al-Monitor that Hamas is seeking to develop its missile capabilities in preparation for any future military confrontation to influence the course of the battle and achieve political and military gains.

He said that the movement wants to send a message to Israel that it is prepared to use these missiles if it continues to delay the implementation of the truce. Abu Zubaydah noted that the message was clear as the test-firing of missiles took place just hours before the Israeli Cabinet convened in the Gaza envelope.

This comes amid warnings that Israel and the Gaza Strip would slide into a full-scale confrontation if they do not make any progress in the truce talks.