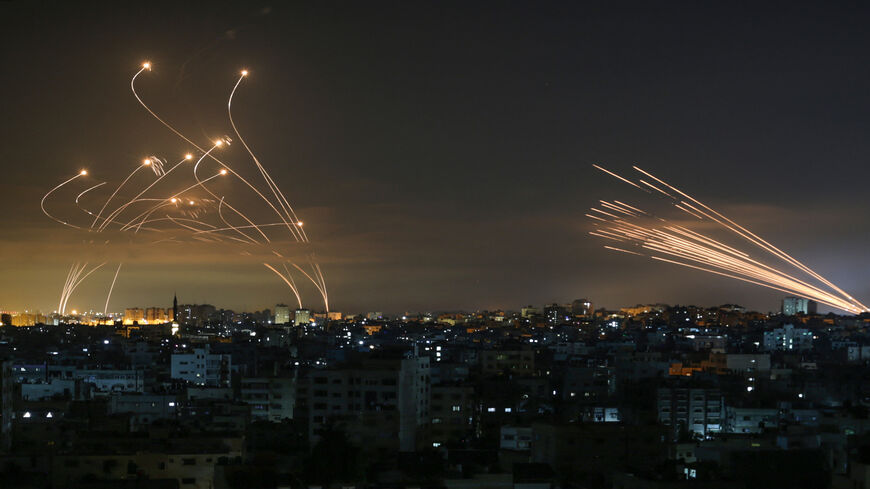 Rockets are seen in the night sky fired toward Israel from Beit Lahia, northern Gaza Strip, May 14, 2021. - Anas Baba/AFP via Getty Images

Izz ad-Din al-Qassam Brigades, Hamas’ military wing, launched May 10 seven missiles toward Jerusalem, carrying high-explosive warheads with a range of 120 kilometers (75 miles) in response to Israeli actions in Jerusalem, settler incursions into Al-Aqsa Mosque and pressure on residents of Sheikh Jarrah to leave their homes. Meanwhile, the Israeli army stated that it had only intercepted one missile and was forced to evacuate the Knesset building.

On May 11, two Israelis were killed and 60 others wounded when Hamas launched 137 S40 missiles at the cities of Ashkelon and Ashdod, with one directly hitting a building.

On the same night, central Israel was subjected to the heaviest bombardment since the escalation began, with dozens of rockets falling in Tel Aviv and Gush Dan, killing one person, wounding dozens and hitting the main oil storage tank.

On May 12, Hamas fired SH85 missiles at Tel Aviv and Ben-Gurion Airport, with a range of 85 kilometers (53 miles).

On May 13, it fired an Ayyash missile with large destructive force and a range of 250 kilometers (155 miles) toward Israel’s Ramon Airport.

Mahmoud Mardawi, a member of Hamas’ national relations bureau and a former leader of al-Qassam Brigades, told Al-Monitor that Hamas is relying more on locally produced weapons than in past conflicts. With each new conflict, he said, "Hamas reveals more of its locally manufactured rockets and missiles whose range, accuracy, shooting power and destructive ability are proving to be effective." He claimed that Hamas' combat and missile capabilities in 2021 have increased by 20 to 30 times compared to 2014. "This enabled it to fire an increasing number of rockets within a few minutes," he added.

Saleh al-Arouri, deputy head of Hamas’ political bureau, told Al-Aqsa TV May 12, “Hamas has the ability to fight for long months with more momentum than ever before, and the missiles that al-Qassam Brigades launched in the current round of escalation are from its old stockpile, as it has yet to use its new [missiles].”

An official in an armed Palestinian wing who refused to reveal his name or the faction he belongs to, told Al-Monitor, “Israel and [some] Arab countries continuously work to thwart the resistance’s weapons smuggling routes, which start from Iran, go through the Red Sea, the Sinai Peninsula and end up in the Gaza Strip, as well as through Sudan and Libya." (The "resistance" here refers to Palestinian militant groups fighting Israel.)

He added, "There are two reasons Hamas’ rockets hit their Israeli targets with precision this time around. The first is that dozens of rockets were simultaneously launched, and the second is the use of guided missiles to hit high Israeli buildings.”

Citing Israeli intelligence estimates, the Israeli Jerusalem Post wrote May 11, “Hamas has dozens of rockets with a range of 100-160 kilometers [62-99 miles], which can cover most of the country even up to Haifa and further north.”

According to the newspaper, Hamas is believed to have in its possession hundreds of rockets with a range of 70-80 kilometers (43-50 miles), which can hit three critical targets, namely Tel Aviv and the surrounding cities, Ben-Gurion Airport and Jerusalem.

Hamas, according to estimates, also has rockets that can reach large cities on the coast and in the center of the country, including Rishon Lezion, Rehovot and Beit Shemesh.

The paper continued that Hamas’ large arsenal of 5,000 to 6,000 rockets with a range of 40-45 kilometers (25-28 miles) can reach Beersheba, Ashdod in the south, Ashkelon and the entire Gaza corridor.

Hamas, according to the newspaper, also owns a wide range of thousands of mortars that can strike Israeli villages along the Gaza border.

Wasef Erekat, a former artillery unit commander of the PLO, told Al-Monitor that the intensity of rocket attacks during the current conflict implies it is prepared for a "long-term battle." He said the militant group is using missiles of various range lengths in an attempt to circumvent Israel's Iron Dome defense system, which he claimed showed "technical flaws" based on Hamas' ability to get by it with some rockets.

He added, “Hamas’ locally manufactured rockets do not conform to international standards, as they lack an air guidance system."

Following the Israeli withdrawal from Gaza in 2005, Hamas had greater leeway to manufacture rockets, and it tried many of its missile systems during the wars of 2008, 2012 and 2014, including the M75 missile with a range of 75 kilometers (109 miles), which was first launched in 2012.

Rami Abu Zubaydah, a Palestinian military expert and writer for Al Jazeera, told Al-Monitor, “Hamas’ development of rockets is not only limited to their range, as it also affects the rocket density. The movement is not capable of firing multiple rocket-propelled grenades with destructive power simultaneously.”

He noted, “Hamas often relies on its own efforts [to develop] rockets with an occasional recourse to Iran's technical expertise. Hamas has a rocket manufacturing and development unit that includes teams of engineers. It had expected an Israeli response to its rocket attacks, but it is waging the military round in a calm and balanced way and with calculated tactics, as it harbors qualitative rocket capability surprises.”

Hamas has a number of engineers involved in developing its rocket arsenal. One of them was Jamal al-Zibdeh, who was assassinated by Israel on May 12 in the Gaza Strip. He was a lecturer at the Islamic University in the Department of Mechanical Engineering.

Fadi al-Batsh, an engineer, was also assassinated by the Mossad in Malaysia in 2018. He was one of the engineers who attempted to develop a system for Hamas’ rockets to evade Israeli anti-missile systems like the Iron Dome.