Hamas’ rockets are locally produced and lacking a qualitative edge due to Iran’s decision to cut military support to the Islamist movement. 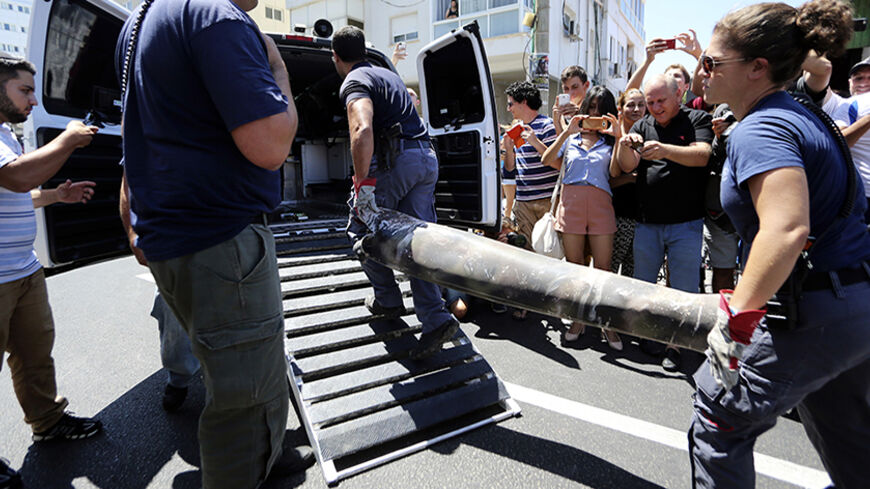 Police explosive experts load the remains of a rocket into a van after it was intercepted by Israel's Iron Dome aerial defense system, in Tel Aviv, July 11, 2014. - REUTERS/Yaron Brener/Ynet

Unlike the previous war in Gaza in 2012, Iran has not declared the same level of support for Hamas in its current fight against Israel. Also unlike the previous war, it has not taken credit for the rockets owned by Hamas and launched on Tel Aviv, Jerusalem, Haifa and Gush Dan.

Hamas has made sure to emphasize the locally made arsenal by giving these rockets purely Palestinian names, in light of the absence of the Iranian-made Fajr rocket.

Locally made rockets were given the names of founding leaders of Hamas who were assassinated by Israel in the previous years, namely, the M-75 rockets reaching Jerusalem, R-160 rockets that Hamas used on Haifa and J-80 rockets of an 80-kilometer (50-mile) range and targeting Tel Aviv in central Israel.

Al-Monitor learned that in recent months, the Izz ad-Din al-Qassam Brigades carried out successful military trials in the Mediterranean Sea of these Gaza-produced rockets with a range of tens of kilometers. The sounds of these trial operations were heard in different areas of the Gaza Strip, especially in coastal areas. Although relations between Hamas and Iran have improved, it has not resulted in the resumption of major financial aid or weapons to the Gaza Strip.

A senior official in Hamas from abroad confirmed to Al-Monitor by phone that “al-Qassam Brigades took a decision to develop their locally produced rocket arsenal in light of the apathetic relations with Iran, which were not ​​entirely cut. However, the deterioration became apparent in the financial and military fields, prompting al-Qassam Brigades to initiate a campaign that is well underway of local production to make up for the shortage caused by this deterioration.”

The official added, “Another motive that led al-Qassam [Brigades] to start local production of rockets is the closure of tunnels by Egypt. This restricted the entry of raw materials needed for the manufacturing of rockets. However, despite the cut-off of the main source of supply of al-Qassam [Brigades] with rockets of multiple ranges from different origins, this did not prevent it from producing local rockets reaching targets deeper inside Israel. These two motives led al-​​Qassam Brigades to invest more in the production of weapons and rockets by relying on trained engineers.”

The BBC reported that “the Gaza rockets may seem ineffective — partly because many are homemade and partly because they're hopelessly overmatched by Israel's Iron Dome anti-missile defense system.” Yet, the military efficiency of these rockets — rather than its ability to reach targets — is shown by the reaction of Israel's population as they have to constantly run to shelters to hide.

This prompted the Christian Science Monitor to say that “Hamas has emerged from a 19-month cease-fire stronger, savvier, and more effective at hitting Israel where it will hurt the most. Hamas' arsenal, estimated at 10,000 rockets, is bigger than it was in 2012. Its mid-range rockets are much more accurate, and it has acquired long-range missiles that reach beyond Tel Aviv and Jerusalem, putting as many as 5 million of Israel’s citizens at risk.”

A field commander of al-Qassam Brigades explained to Al-Monitor that before the outbreak of the current confrontation that the halt of Iranian military support deprived Hamas from significant armament capacities and much-needed logistical support, adding that the Iranian rocket arsenal makes a huge difference in the balance of power in favor of Hamas against Israel. “We strived hard to prevent our political dispute with Tehran from affecting the continuing military support, but it did. I don’t want to give further details,” the commander said.

In an interview with Al-Monitor in central Gaza, he said, “The project of homemade rockets was launched by al-Qassam Brigades since late 2001, starting with Qassam-1, Qassam-2 and Qassam-3 and mortars. We were able to threaten all southern Israeli settlements, including Sderot, Niram, Ofakim, Ashkelon, with our homemade rockets before receiving the Iranian military support. These homemade missiles enabled us to target Tel Aviv in the war of 2012.”

“Following the deterioration of relations between Hamas and Iran, it was necessary for al-Qassam Brigades to move in other directions to make up for the Iranian rocket shortages. We found new resources to supply us with weapons,” the field commander said. “These weapons will make us resist in any confrontation with Israel. It is true that the Iranian rockets are deadlier and more narrowly focused, but given Israel and Egypt’s blockade and in light of the frosty relationship with Iran, we are willing to do anything to develop our armament.”

Prominent Palestinian academic Abdul Sattar Qassem of An-Najah National University in Nablus predicted in an article for Al Jazeera on July 10 that locally made rockets will be developed to be an effective tool used by the resistance against Israel. With a range stretching beyond 100 kilometers (62 miles), these rockets will be developed in the future to be equipped with explosive heads weighing 100 kilograms (220 pounds) and more, and they will hit their targets with greater precision.

It is worth noting that in 2008, Hamas fought with open Iranian military support. Moreover, the rockets fired at Israel then were partly developed by Iranians. In the current war, Hamas has lost the support of its Iranian ally, who halted financial and military support after Hamas openly supported the Syrian revolt against President Bashar al-Assad. Additionally, the movement is facing a struggle from Egypt under President Abdel Fattah al-Sisi, who closed the border tunnels through which Hamas obtained weapons.

However, Osama Hamdan, the official responsible for the Department of International Relations in Hamas, denied in an interview with the Lebanese newspaper As-Safir that Hamas is affected by the decline of Iranian military support in the ongoing war. He stressed that whoever is betting that Hamas is facing specific problems because of changed circumstances would be waging a wrong bet. He continued, “The resistance is stronger today and we are still at the beginning of the battle. Time will prove our resilience and confrontation power. Hamas is able to withstand and has more surprises, and this battle will be eventually a new achievement for the resistance.”

Al-Monitor talked with a former member of the Islamic Consultative Assembly of Iran, who preferred to remain anonymous. He stated, “Hamas does not deny the apparent role of Iran in its military progress, although this support was halted in the last two years. Al-Quds Force supplied Hamas fighters with advanced rockets and provided them with the capabilities for installing explosives against armored vehicles, and constructing and using smart explosive devices techniques, it also provided them with the technical expertise to manufacture deadly explosive."

He told Al-Monitor over the phone from Tehran, “The military performance of Hamas in the current war in 2014 has Iranian fingerprints all over it in an indisputable manner, especially in terms of training of fighters on the methods of combat, qualification and transfer of knowledge and technological-executive skills to be used to produce and develop weapons, and the quality improvement of rockets fired toward Israel.”