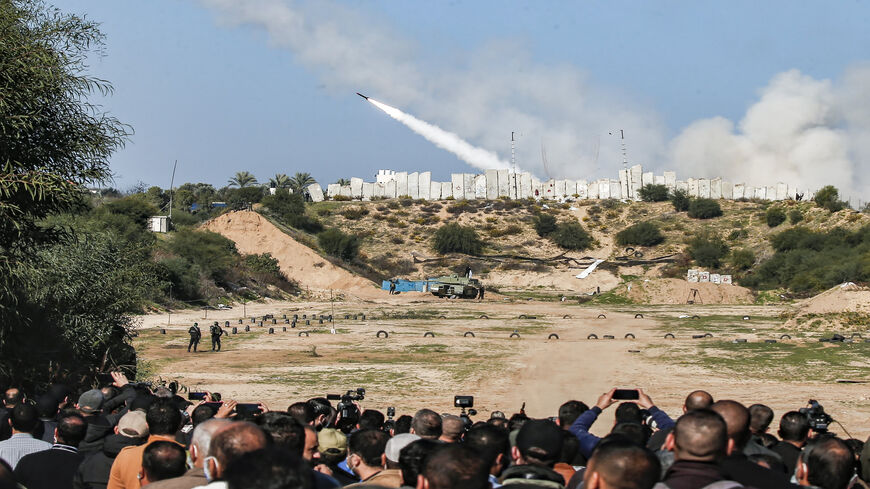 As Hamas and Fatah continue to hold talks on the upcoming Palestinian general elections, Israeli statements and reports have circulated about Hamas' growing military capabilities. Meanwhile, Israel launched airstrikes against military targets in the Gaza Strip in the early hours of March 24, in response to a rocket fired from the enclave toward the city of Beersheba. No injuries have been reported.

The Israeli reports on Hamas’ military capabilities have coincided with the movement’s preparations to run in the elections in a few months and its ongoing political talks with Fatah. This has raised questions on any potential contradictions between the military and political paths Hamas has opted for recently.

A close associate of President Mahmoud Abbas told Al-Monitor on condition of anonymity, “The national dialogues between Fatah and Hamas are currently focused on the general elections. The talks on problematic issues, such as the arms [used] and attacks against Israel, were postponed to a later time. Such a positive atmosphere in the Palestinian arena requires that Hamas focuses on unifying the domestic front, away from any regional ties with countries that seek political influence in the Palestinian territories, even if through military support.”

On March 17, Haaretz’s correspondent Amos Harel quoted Israeli sources as saying, “A gradual military progress has been observed in the Gaza Strip. Hamas’ military arm, Izz ad-Din al-Qassam Brigades, with Iran’s support, boosted its production capacity for rockets and drones. It also conducts frequent test firings toward the Mediterranean and increases rocket firing experiments in the Mediterranean every now and then.”

The sources added, “The Israeli revelation that Hamas’ capabilities have increased come as part of talks about the so-called new Iranian model that Tehran has pursued in the armament of the groups it supports including Hamas in the Gaza Strip. This model is based on building facilities for the manufacturing of weaponry, in parallel with the smuggling channels that the Israeli army targets every now and then.”

Mahmoud Mardawi, a Hamas leader and former military commander of the Izz ad-Din al-Qassam Brigades, told Al-Monitor, “Hamas continuously gains experience and regularly works to increase its manufacturing capabilities in the ground, naval and air combat fields. It receives aid from Iran and develops its own military capabilities, digging underground [tunnels], resorting to the sea and other means for arms smuggling, which I decline to reveal for security reasons. Israel is well aware that Hamas has made military preparations for the next confrontation, with the locally produced and smuggled military capabilities.”

He added, “[The fact] that Hamas is regularly receiving military aid from Iran and developing its own warfare capabilities does not contradict the ongoing dialogue with Fatah. But there cannot be a national consensus neither on giving up the resistance nor on the peace and war decision. There will not be an internal unity neither at the expense of the resistance nor its weapons arsenal.”

On March 18, head of the Israeli army Southern Command Maj. Gen. Herzi Halevi told Israel’s Channel 12 that Israel has repeatedly carried out heavy strikes against Hamas targets in the Gaza Strip, including the tunnels, rocket launchers and factories; struck its naval forces, gliders and drones; and inflicted damage to its naval ships. Its airstrikes have focused on the rockets production sites, in addition to the tunnel passages and underground bunkers where Hamas’ cadres are stationed in the heart of Gaza.

Rami Abu Zubaydah, a military expert who writes for Al Jazeera, told Al-Monitor, “Hamas is constantly working to obtain military and armament supplies, and is using every opportunity to ensure an ongoing flow of weapons to [Gaza] by sea and land. That is although it had begun in the past years to rely heavily on itself. The majority of its weapons, equipment and rockets are self-made weaponry, based on a deliberate strategy to build and develop its military strength, in light of the poor supply from abroad.”

He noted, “Hamas continues to rely on Iran’s capabilities and expertise, as the movement sends its experts and soldiers to receive training in Iran, although the Iranian smuggling operations are exposable and subject to Israeli attacks.”

A report by Israel’s Walla news site said March 20 that al-Qassam Brigades has turned from unorganized divisions and battalions to a quasi-regular army with a clear hierarchy. It also highlighted Iran’s financial aid and operational military development, including the smuggling of massive weapons into Gaza, and Hamas’ efforts to manufacture new weapons — be they drones or longer range missiles. That would make the next military confrontation in the air, at sea and on the ground different from the past ones and puzzling, the report added.

Youssef al-Sharqawi, a Palestinian military expert and military leader in the PLO, told Al-Monitor, “Iran's ongoing support for Hamas points at its interest in boosting military support for Gaza due to its proximity to Israel and ability to inflict harm [on Israel] in case the latter strikes Iran. Although the far distance separating Iran and Gaza prevents [the latter] from receiving the largest military supply, Israel and Egypt pursue any combat equipment entering Gaza by land and sea.”

He added, “It is inaccurate to say that Hamas’ continued access to Iranian military support would impact the ongoing Fatah-Hamas national dialogue. Fatah is going through an intrinsic crisis because it recognized Israel as legitimate in the 1993 Oslo Accord and no longer speaks of the armed resistance. Hence, a consensus between the two movements will only be achieved in case of a security coordination between Hamas and Israel. And that is far-fetched.”

Hamas occasionally expresses gratitude for the military aid provided by Iran since such support has allowed the movement to survive the Israeli military operations in the past years. In parallel, Hamas built its own military capabilities and combat tools, without, however, allowing such a progress to affect the national dialogue with Fatah, which is less than happy about the Hamas-Iran relations.