Palestinian self-made weaponry on the rise

Despite Israel's siege on the Gaza Strip, the armed wings of the Palestinian factions have managed to expand their military capabilities. 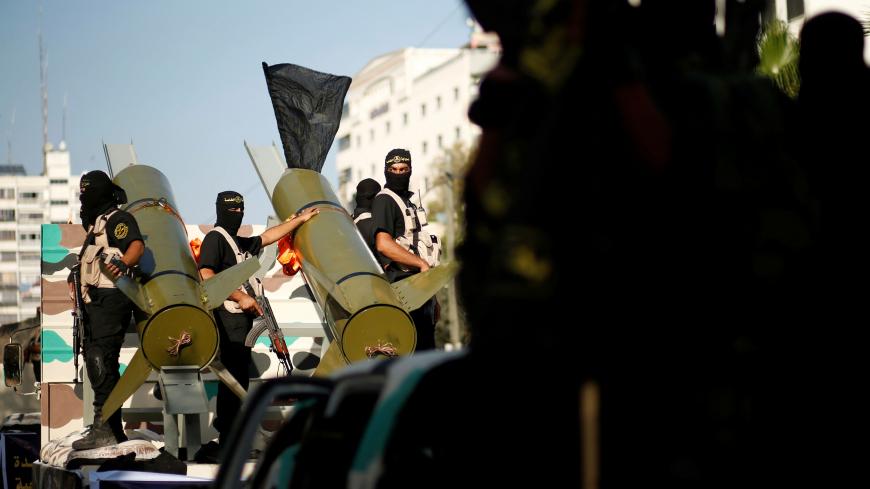 GAZA CITY, Gaza Strip — Palestinian armed factions may have some major surprises in store for Israel in any coming confrontation, political analysts close to the groups predict.

The factions have improved their intelligence resources and increased the size of their weapons cache by producing their own arms, sources told Al-Monitor recently. That has allowed them to cause unprecedented destruction; they were able to fire nearly 700 rockets in the last escalation in a short period of time, killing four and wounding dozens.

Hamas leader Yahya Sinwar has said publicly that Iran has supplied Hamas with weapons, and Tehran is also thought to be providing weapons to the Islamic Jihad or at least helping it manufacture weapons.

However, analyst Hamza Abu Chanab, an expert on Palestinian factions, told Al-Monitor that the factions' military manufacturing relies on local capabilities and creativity: “Although the resistance had relied on the smuggling of missiles in the past, it is now relying on itself.”

The factions are using the vast information available online and taking advantage of the debris of rockets Israel has fired into the Gaza Strip, particularly those that did not explode. Abu Chanab says to expect surprises exceeding all of Israel's expectations in the next round of escalation.

Israel’s Walla internet news portal reported May 25 that Hamas is preparing for a wide-scale escalation with Israel, with the goal of obtaining economic gains and getting the siege lifted from the Gaza Strip. A war between Israel and armed factions could cause both sides a great deal of loss and destruction.

Ziad Nakhaleh, who heads the Islamic Jihad in Gaza, has said in news interviews that the factions have the ability to fire more than 1,000 rockets daily for a month in any new war, as the rockets and weaponry Hamas produces have made up for Israeli and Egyptian crackdowns on smuggling operations.

Hamas and the Islamic Jihad have expanded their military potential in a remarkable way, as seen during the last escalation, when they fired nearly 700 rockets and mortars May 3-6. For the first time, the Islamic Jihad fired Badr 3 rockets, loaded with 250 kilograms (550 pounds) of explosives.

The Palestinian al-Quds newspaper reported May 20 that during the last round of fighting, the factions tried to bring down an Israeli helicopter. Though that attempt failed, Israel’s Kan 11 Channel reported that day that Hamas' anti-aircraft missile capabilities pose a major threat to the Israeli army’s helicopters.

On May 30, the Islamic Jihad released a video showing a Palestinian drone targeting two Israeli military vehicles for the first time in the armed factions’ history.

A source close to Izz ad-Din al-Qassam Brigades — Hamas' military wing — told Al-Monitor on condition of anonymity that it will continue to look for ways to carry out military action until the world admits that the Palestinian people’s cause is just and recognizes their rights. He said that what was used in the last escalation round was only a small part of the armed factions' capabilities and that they can upgrade their military systems further.

“We almost fully rely on self-made military equipment, particularly since the smuggling of weapons into the Gaza Strip has become very hard and rare," he said. “Israel is in the dark when it comes to the military technology and equipment the resistance has in hand."

The source said al-Qassam Brigades now possesses a great quantity of effective land, sea and air weapons that will capture everyone’s attention in the future war, and underlined that the group is still equipping and preparing itself and has strategies to deal with any Israeli violation.

Ibrahim Habib, a security expert and lecturer at Ribat University College, told Al-Monitor that during the last escalation, the factions had demonstrated their military development, which significantly exceeded Israel's expectations.

“The rockets’ warheads have had a great impact on the Israeli front, generating a death toll,” he added. Habib indicated that Hamas and the Islamic Jihad have doubled their military potential since 2014.

He said the Palestinian factions, most notably Hamas and the Islamic Jihad, used a new tactic to manipulate Israel's Iron Dome defense system. Most of the rockets struck their targets, which confused the Israeli military and prompted Israel to consent to the cease-fire, he said.

Israeli media, on the other hand, said the Iron Dome stopped all but 30 to 50 of the rockets.

Observers said Israel's pressure on the Gaza Strip leaves the factions with only two paths: arm themselves under siege or become easy prey for Israel.

“The Palestinian factions’ armed wings are well aware that Israel is using the escalation rounds to learn about their military equipment and evolved military capabilities,” Habib said. “But, they will not reveal what they have."

Hassan Abdo, a political analyst close to the Islamic Jihad, told Al-Monitor the Palestinian factions have no choice but to resist and be prepared. This and the ideology they espouse require them to constantly boost their military capabilities.

Al-Quds Brigades, the Islamic Jihad's military wing, is committed to upgrading its resources and raising its fighters’ capabilities, and has a variety of advanced and efficient weaponry, including guided anti-tank and anti-aircraft missiles. It benefits from the experience of others and from training courses held abroad, and consults experts in military weapons production, Abdo said.

The upgrades aren't limited to rockets, but also include combat equipment designed to counter Israel if the latter decided to reoccupy the Gaza Strip. As many as 300 fighters are attending intensive training courses on how to set up ambushes to kill or abduct soldiers, he said.

He expects tension to continue to prevail between Israel and the Gaza Strip if Israel doesn't lift the siege quickly.