Israel reveals how weapons are being smuggled from Iran to Hamas in Gaza via Yemen and Sudan and then through Egypt. 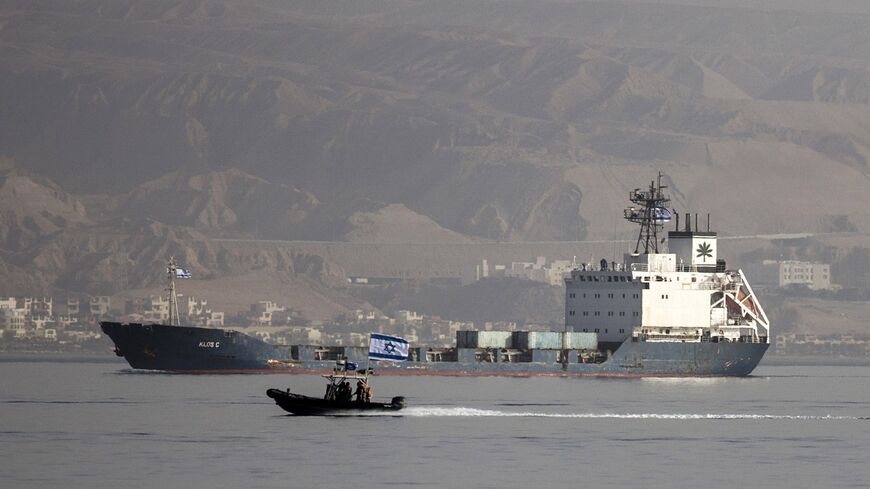 The Panamanian-flagged Klos-C is escorted into the southern Israeli port of Eilat by Israeli warships (unseen) on March 8, 2014, after it was intercepted by the Israeli navy, with the military saying it was carrying advanced rockets from Iran to the Hamas-run Gaza Strip. Israeli naval commandos seized the vessel on March 5, 2014, in the Red Sea between Eritrea and Sudan. An Israeli flag is seen on a speedboat in the foreground. - JACK GUEZ/AFP via Getty Images

Israeli military expert Amir Bohbot revealed in a report published by Israel's Walla News website April 3 said that in 2006, Iran opened a route to smuggle missiles and ammunition to Hamas in the Gaza Strip through Yemen and Sudan, thousands of kilometers from the Israeli coast.

The smuggling operations were led by Hamas’ military commander Mahmoud al-Mabhouh until he was assassinated by Israel in Dubai in January 2010, Bohbot said, without specifying who succeeded Mabhouh.

Bohbot, who received his information from Israel's Mossad intelligence agency, said the maritime arms smuggling route starts from Iran toward Yemen, and from there reaches Sudan. Yemen and Sudan are on opposite sides of the Red Sea. From Sudan trucks head for the desert on a 1,000-kilometer (620-mile) journey to Egypt, where smugglers cross the Suez Canal and transport the weapons through the tunnels dug under the Gaza Strip with the help of Bedouins. He said smugglers routinely move weapons from Sudan on behalf of Hamas.

A source told Al-Monitor that other weapons are shipped through the Suez Canal and then surreptitiously delivered to Gaza frogmen.

Hamas has yet to officially comment on the report. However, the movement does not hide its willingness to engage in a military confrontation with Israel. Hamas believes that it has the right to accumulate combat power and that any new weapon it can secure, especially accurate and lethal weapons, will have a large and decisive role in any upcoming confrontation with Israel.

Mahmoud Mardawi, a Hamas leader and former official in the movement’s armed wing, Izz ad-Din al-Qassam Brigades, told Al-Monitor, “Hamas wants to explore all sources of military supplies from every country and movement, mainly from Iran. We will not stop knocking on doors to find parties to provide us with weapons.”

He added, “Arab and Islamic countries are required to understand our moves when we try to supply ourselves with weapons. Despite the importance of external financial and political support, it is not enough. We want to be supported with weapons, because they are the source of strength in our struggle against Israel. We will not hesitate to reach out to any country that is willing to supply us with weapons and equipment with no conditions or requirements that would drag us into any conflict in the region that does not serve the Palestinian cause.”

The Israeli report about the smuggling route coincided with two important regional developments related to Hamas’ arms smuggling operations. The first is that Sudan, a key corridor for Hamas’ weapons supplies, approved on April 6 a bill abolishing a law on boycotting Israel. The second is the attack — believed to have been carried out by Israel — on an intelligence-gathering vessel linked to Iran's Islamic Revolutionary Guard Corps off the western coast of Yemen in the Red Sea the evening of April 6 in tandem with the launch of US-Iranian indirect talks to revive the 2015 nuclear deal. The area is one of the routes by which weapons move from Iran to Hamas.

Rami Abu Zubaydah, an expert on Hamas military affairs who writes for Al Jazeera, told Al-Monitor, “The reason for the Israeli disclosure of Hamas’ weapons smuggling maritime routes comes to provoke international public opinion against Hamas and Iran. Meanwhile, Hamas is exerting all efforts to come up with new ways of securing weapons into Gaza discreetly, given the sensitivity of its security information. Hamas relies on complete secrecy regarding such sensitive issues.

He pointed out that Hamas relies on tunnels, the sea and mafia networks as ways to bring military equipment into the Gaza Strip and smuggle arms. “It has managed to evade Israeli attempts to hinder the delivery of weapons to it, across thousands of kilometers by land and sea, bypassing military bases, aviation and sea patrols,” he said. “Hamas even obtained Russian Kornet anti-tank guided missile systems from Libya.”

The delivery of weapons to Hamas in Gaza and the smuggling routes will continue to trigger controversy at the Israeli, regional and international levels. The Gaza Strip is under an Israeli siege by land, sea and air. The combat equipment that Hamas possesses today — some of which came to light in the 2014 war and some of which was revealed in military parades and drills in the besieged enclave’s cities — appears to show how smuggling has helped Hamas develop advanced combat capabilities.

Nimrod Aloni, commander of the Israeli army’s Gaza Division, told Walla on March 28 that declining Iranian financial support to Hamas due to US sanctions imposed on Iran has shifted this support toward the transfer of military technology to help the movement develop weapons.

Saeed Bisharat, the editor-in-chief of Al-Hodhod news network, told Al-Monitor, “Israel had cut off all roads used by Hamas to get weapons and is now in control of the smuggling routes. However, Hamas may have found an alternative. It is only natural for it to have other safe ways of smuggling in order to develop its arsenal. Although smuggling operations have weakened recently, they will quickly recover.”

He added, “Hamas does not depend only on Iran for its arms supply, but also resorts to other entities and countries who also provide it with expertise and military officers to train its fighters. Israel may have succeeded in stopping a ship or a vessel headed for Hamas in Gaza, but what is being smuggled is much more than what is being seized.”

On Feb. 4, 2020, the Israeli army announced that it had foiled an arms smuggling attempt off the Gaza coast, north of Sinai. The army pursued a small boat and arrested everyone on board after discovering several weapons to be used by Hamas’ naval commando forces.

On July 3, 2019, the Israeli air force said it had stopped several trucks carrying weapons between November 2018 and March 2019 in Sinai before they were transported to Hamas in Gaza. There were Iranian rockets, weapons and highly explosive material used in the manufacture of explosives. According to Israel, the trucks made their way from Libya via arms smugglers.

An arms smuggler who deals with Hamas in the Gaza Strip told Al-Monitor on condition of anonymity that weapons reach Sinai on their way to Gaza after being shipped to Sudan or Somalia, "then to Egypt, where smugglers transport it by land to Sinai, and from there Bedouins specialized in smuggling deliver the shipment to Gaza through tunnels. The second route is through the Iranian Revolutionary Guards who send weapons through the Suez Canal all the way to the Mediterranean Sea, where Iranian ships dock off the coast of Gaza in Egyptian territorial waters. When night sets, Hamas frogmen transport the weapons in closed containers.”

In turn, Imad Abu Awad, a researcher at the Jerusalem Center for Studies of Israeli and Palestinian Affairs, told Al-Monitor, “Israel has succeeded in cooperating with Arab countries to uncover Hamas’ arms smuggling routes. Even though the common path is Iran, Sudan, Sinai then Gaza, the recent normalization agreements [reached between Israel and a number of regional countries] have greatly undermined Hamas' efforts to bring weapons into the Gaza Strip. However, other ways are still being used such as undiscovered tunnels and sea lanes, in light of Hamas’ great development thanks to a division trained in diving, swimming and penetrating the depths of the sea.”

Abu Awad added, “There are no countries other than Iran that supply Hamas with weapons, because they do not dare to get involved. This would make them face international sanctions. However, there are regional organizations that provide the movement with weapons, such as Libyan parties.”