Israel goes after Hamas in Sinai

Recent reports suggest that Israel has been leading a campaign in the Sinai Peninsula to stop arms smuggling to the Gaza Strip. 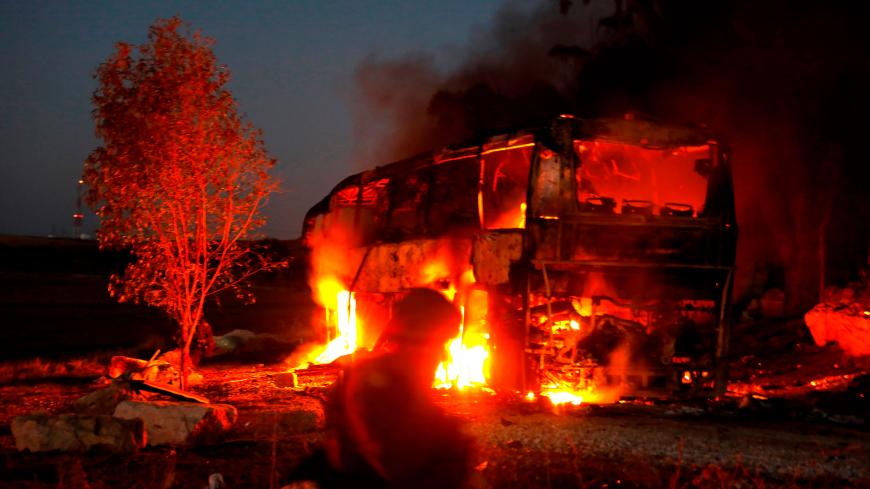 Israeli security forces and firefighters gather near a bus set ablaze after it was hit by a rocket fired from the Gaza Strip, at the Israel-Gaza border near the kibbutz of Kfar Aza, Nov. 12, 2018. - MENAHEM KAHANA/AFP/Getty Images

The escalation Nov. 13 between Hamas and Israel in the Gaza Strip revealed Hamas’ use of a Kornet missile that hit an Israeli military bus inside Israel, north of Gaza. Hamas announced killing and wounding an unspecified number of passengers, while Israel said one soldier was seriously wounded.

Hamas gets Kornet missiles from smuggling operations through the tunnels from the Sinai Peninsula. Israel believes they are dangerous because they are anti-tank and anti-reinforcement, and they carry a highly flammable tip and have a destructive penetration ability.

Amir Bohbot, an expert on Israeli military affairs at Walla website, cited Jan. 6 Israeli Chief of Staff Gadi Eizenkot and other officers saying on condition of anonymity, “Israel is pursuing Hamas in Sinai and is spearheading a big battle against its growing military wing, Izz ad-Din al-Qassam Brigades, in this border region, by foiling dozens of arms shipments heading from Sinai to Gaza. Israel managed to destroy 15,000 advanced missiles on their way to Hamas warehouses in the Gaza Strip.”

Hamas spokesman in Gaza Hazem Qassem told Al-Monitor, “Hamas is a national liberation movement limiting its activity to fighting Israel in the Palestinian territories. It has the right to possess the necessary tools to defend its people against Israeli aggression.”

Qassem added, "Hamas deploys constant efforts to possess fighting tools used to resist Israel only. Our relationship with Egypt is positively evolving, and we have joint coordination to ensure security between Gaza and Sinai. Hamas considers Egyptian security part of Gaza’s security.”

Egyptian President Abdel Fattah al-Sisi announced Jan. 6 during an interview on CBS News that the Egyptian army is working with Israel in Sinai, and relations between the two countries are the strongest since they were built 40 years ago, when they signed the peace treaty in 1978.

Sisi’s statement, and the Israeli report before that, seem to contradict the evolving relations between Hamas and Egypt in the past months. Their relations reached their peak with the exchange of visits. On Jan. 10, Hamas welcomed a delegation from the Egyptian intelligence to cement reconciliation and the cease-fire between Israel and Hamas. In November, Hamas leaders visited Egypt to develop bilateral relations, end the blockade and achieve national reconciliation.

An Egyptian journalist told Al-Monitor on condition of anonymity, “The Israeli air force has been raiding Sinai since 2013 to pursue arms shipments headed to Gaza. The raids led to human and material losses, and Sinai residents have grown used to seeing Israeli warplanes infiltrating into Sinai to capture targets or launch specific raids. The military coordination between the Israeli and Egyptian armies allowed the Israeli warplanes to move freely in Sinai.”

Israel considers Sinai its weak southern underbelly because Egyptian security and military control over it is not strong, and the security situation on Israeli borders is volatile. Israel is concerned about the ties between Sinai militants and Hamas in Gaza and the smuggling of weapons, including machine guns, anti-aircraft weapons, heavy weapons, mortars, RPGs, bombs and sniping guns, to the movement.

French website Intelligence Online reported May 2 that Israel built communication channels with Libyan Gen. Khalifa Hifter to exchange security information in order to halt the flow of weapons from Libya to Sudan, reaching Sinai and then the Gaza Strip. In February 2016, Hamas militants in Gaza carried anti-aircraft Libyan arms, type GSh-23L. These are Soviet weapons specific for military aircraft, like machine guns, and they are fixed on a ground base for firing.

Wasef Erekat, Palestinian military expert in the West Bank and former artillery unit commander of the PLO, told Al-Monitor, “Israel is giving Egypt security information about the weapons shipments heading from Sinai to Gaza. Meanwhile Israel is raiding these shipments. Israel shelled similar vehicles coming from Sudan to Gaza in the past. Hamas is seeking to get weapons from Iran and Hezbollah or from Israeli weapons traders despite being pursued in Sinai.”

In November 2016, the Israeli army foiled an attempt to smuggle weapons from Sinai into Gaza by sea on board of a boat carrying weapons, explosives and fighting equipment to Hamas. Transferring weapons by sea was the new alternative for Hamas when the tunnels were closed in 2013.

Yoav Zeitoun, military correspondent for Yedioth Ahronoth, cited on Nov. 22, 2016, an officer in the Israeli navy as saying, “Relations between the Israeli naval force and its Egyptian counterpart are strong and friendly, and the two countries maintain a high level of security coordination through commander meetings on the coast.”

Al-Monitor tried to contact Egyptian security sources, but to no avail as they refuse to talk about security matters to the media.

Alaa Remawi, head of Al-Quds Center for Political Studies in Ramallah, told Al-Monitor, “Hamas has a strong network of relations with some armed groups in Sinai that provide it weapons arriving from Sudan and Libya. But Egyptian-Israeli joint efforts since 2013 against Hamas have resulted in Egypt striking border tunnels between Gaza and Sinai, while Israel handled the air raids on arms shipments.”