Egypt's destruction of Sinai tunnels has created an arms shortage in Gaza. 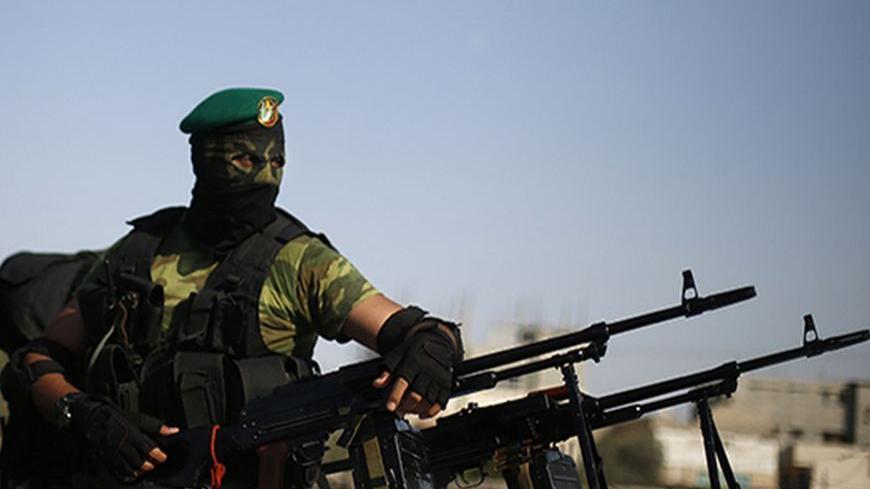 A Palestinian Hamas militant takes part in a protest against peace talks between Israel and the Palestinians in Gaza City, Sept. 14, 2013. - REUTERS/Suhaib Salem

GAZA CITY, Gaza Strip — Since the Egyptian army began demolishing the more than 1,000 tunnels between Gaza and the Sinai, Palestinians have analyzed the resulting economic damage, price hikes and deteriorating living conditions in Gaza. The Hamas government published a study about the issue, but one effect of the tunnel demolitions has not been adequately reported because of its confidential nature — the drop in the weapons supply to Palestinian factions in the Gaza Strip, including how they are trying to make up for the resulting shortages and how it affects the confrontation with Israel.

As reported in Al-Monitor, before Egypt's tough measures, the tunnels were a lifeline for Gaza arms dealers and Palestinian factions smuggling weapons and ammunition. The last Gaza war, in November 2012, only ended when Egypt pledged to Israel that it would undertake unremitting efforts to stop the smuggling of weapons through the tunnels to prevent Hamas from preparing for the next round of fighting.

Israeli media have reported that Hamas has recently been carrying out maintenance work on destroyed tunnels and digging new ones because they lack effective alternative options for weapons deliveries. Such reports aside, after the destruction of the tunnels, it appears that Hamas and other Palestinian factions began obtaining weapons via the Mediterranean, along Gaza’s 40-kilometer(25-mile)-long coastline. Israeli Prime Minister Benjamin Netanyahu has defended Israel’s interception of Gaza-bound ships, some carrying arms and ammunition, as not a day goes by without an attempt to smuggle weapons.

Gaza military sources who spoke with Al-Monitor refused to confirm or deny whether smuggling by sea has replaced the tunnels as an alternative route. They would only say that they have the right to acquire “quality” weapons to confront the next Israeli military campaign.

Israeli media have reported that missiles and other weapons are being smuggled into Gaza using packages and barrels dropped at sea by boats traveling from Egyptian or Lebanese ports. The drops are made a certain distance from the shore, after calculating current and wind conditions so that the containers wash up on Gaza beaches. It is difficult to stop these operations because no one can monitor every inch of coastline searching for small packages.

Al-Monitor has learned from security circles in Gaza that Israeli gunboats have been hounding Palestinian fishermen they suspect of involvement in arms smuggling, but none of the fishermen arrested in the past months have been implicated.

A Gaza field commander told Al-Monitor that the next military confrontation with Israel will start where the last one left off. This means that Hamas, which targeted Jerusalem and Tel Aviv at the end of the 2012 conflict, might begin by striking those cities at the start of a campaign and then move on to cities farther away.

The Israelis believe that Hamas intends to procure Chinese-made C-704 anti-ship missiles with a range of 35 kilometers (22 miles) and radar-guiding systems, which would alter the military situation in Gaza and the military balance between the two sides, as Hamas would be able to target Israeli ships and gas installations. Responding to Israeli reports, the same commander would neither confirm or deny that armed groups in Gaza, including Hamas, are in possession of high-grade weapons, as it would constitute disclosing military secrets.

He did, however, hint at a potential strike against Israel’s offshore gas installations in any future confrontation. "If one of our military men took a pair of binoculars and looked out to sea, he would think that the Israelis had gone mad, because they built massive structures in front of our eyes, these gas installations. These installations are located within range of the thousands of Grad rockets available in Gaza, so we do not need the high-grade rockets the Israelis speak of," he noted.

On Sept. 15, Al-Monitor attended a military parade in Gaza City by the Izz al-Din al-Qassam Brigades. The parade showcased SAM-7 anti-aircraft missiles, which will change the rules of confrontation with Israel. It was the first time Hamas had displayed such a weapon. Gaza residents sometimes hear explosions that are later revealed to be from Hamas military exercises and missile tests to ensure the accuracy of their weapons and equipment, especially rockets and improvised explosive devices (IEDs).

Making up for the shortfall

A look at the weapons used by Hamas in the 2012 confrontation with Israel reveals that the most important among them was the Grad rocket, which is smuggled from abroad. It is an improved Katyusha with a range of 40 kilometers. Hamas also used Iranian Fajr rockets (which have a 75-kilometer, or nearly 47-mile, range), M75 rockets (made locally by Hamas), mortars, anti-armor rockets, explosive belts, hand grenades with a range of 150 meters, RPGs, light machine guns and anti-aircraft guns. Al-Monitor learned from its Gaza military sources that logistical preparations for the current and next phase entail developing and manufacturing these weapons.

After the 2008 and 2012 wars, Hamas took precautions by storing large quantities of weapons in case Israel were to again attack, but the organization and its military partners in Gaza are now trying to compensate for the substantial armament shortfall by developing effective, alternative means of procuring weapons. It has made progress in that regard in terms of acquiring roadside bombs, anti-aircraft and anti-tank missiles, explosive belts, and IEDs, all of which are capable of hindering an Israeli ground invasion.

Another aspect of the “arms crisis” after the destruction of the tunnels is an unprecedented rise in weapons prices. One dealer told Al-Monitor that the price of some weapons had increased by almost 100%. An M-16 rifle, which used to cost $3,000, now goes for $5,000. The price of Russian Kalashnikovs rose from $1,500 to $2,500. The price of ammunition has increased by 200%. According to the dealer, the most significant result of the tunnel demolitions has been the scarcity of weapons, ammunition and explosives. He said the armed factions in Gaza are doing everything they can to procure them.