Hamas opens up on arms, missile supplies from Iran

Hamas surprisingly revealed the secrets of weapons smuggling through Sudan, Syria, Iran and Sinai, which led to questions about the reasons behind such disclosure at this time. 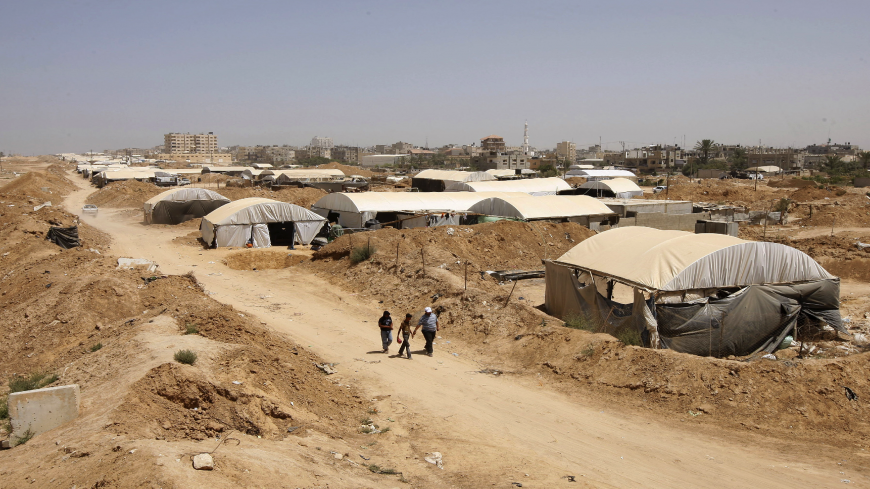 Palestinian workers walk in the area of smuggling tunnels, covered by white structures, which link Egypt and the southern Gaza Strip border town of Rafah, on June 21, 2010. - SAID KHATIB/AFP via Getty Images

While Hamas had for years been keen on hiding how it was receiving its weapons and combat equipment from outside the Palestinian territories, it decided to unveil, for the first time ever, some of these security and military secrets.

The program “What is Hidden is Greater” broadcast by the Qatari Al Jazeera channel on Sept. 13 presented exclusive footage showing members of Izz al-Din al-Qassam Brigades, the armed wing of Hamas, collecting Iranian Fajr missiles and Kornet Anti-Tank shells. Hamas said the movement received those weapons by land and sea, bypassing military bases, aviation and maritime patrols, and it revealed the manufacturing of new missiles constructed of Israeli missile remnants from the 2014 war on Gaza.

The program was presented by Palestinian journalist Tamer al-Mashal and hosted by Ismail Haniyeh, head of Hamas’ political bureau, and a number of Hamas military leaders.

During the program, Haniyeh claimed the United States tried to open a discreet channel with Hamas, but the group refused to do so. The United States has meanwhile sanctioned Hamas and Haniyeh as terrorists. US Ambassador-at-Large Nathan Sales, the State Department’s coordinator for counterterrorism, slammed Haniyeh during a press briefing on Sept. 17, saying, "Our position is very clear. Hamas is a designated terrorist organization. … We do not regard him as a legitimate political actor."

Rami Abu Zubaydah, a Palestinian military expert and part-time researcher at the Egyptian Institute for Studies, told Al-Monitor, “Hamas’ sudden disclosure aims to prove that the [Israeli] siege on Gaza has not prevented it from developing its military infrastructure, given the strenuous efforts it has been deploying to confront Israeli plans to prevent the arrival of weapons and ammunition supplies and to manufacture whatever missile components are available locally. This comes at a time when Arab-Israeli cooperation has emerged in a bid to weaken the Iranian-led axis of resistance that includes Syria, Gaza and Lebanon. It also comes in light of new alliances in the region to place pressure on Hamas."

Hamas’ attempts to acquire weapons and equipment face many obstacles. Besides Israel, the Egyptian border with Gaza has been witnessing accelerated events since 2013. The Egyptian army targeted the border tunnels used to smuggle weapons inside Gaza. Also, deep-water basins have been dug on the Egyptian side of the Gaza border to prevent the digging of such tunnels and create a buffer zone. Buffer walls were constructed along the border, and most recently, the Berenice military base was established [by Egypt] on the southern coast of the Red Sea in January 2020, with Emirati funding, to prevent Hamas from obtaining weapons.

Mahmoud Mardawi, a member of Hamas' national relations bureau and a former leader of al-Qassam Brigades, told Al-Monitor, “Hamas wanted to shed light on the [past] efforts of Syria, Iran and Sudan in supplying it with weapons and equipment. This explains, according to Hamas, the conspiracy against Sudan to hinder its role in serving the Palestinian cause (in reference to the 2019 coup against the former regime). Syria is already absent due to its preoccupation with its civil war. Meanwhile, Iran continues to support us without restrictions or conditions,” he added.

Hamas enjoyed strong ties with the former Sudanese regime of Omar al-Bashir. Sudan had for years helped smuggle weapons to the Gaza Strip through the Sinai Peninsula in Egypt. That is, until the coup against Bashir, when Sudan cut ties with the Palestinian movement. For its part, Syria had long supported Hamas on the military level, before the civil war broke out.

Meanwhile, an arms dealer in Gaza revealed to Al-Monitor on condition of anonymity that “the military factions in Gaza, headed by Hamas, possess distinct types of Iranian R-160 and Fajr-5 missiles with a range of 100 kilometers (62 miles). They also have drones and anti-tank missiles and shoulder-launched rockets produced by Russia. They also plan to acquire Chinese C-704 missiles, anti-ship missiles with a range of 35 kilometers (21 miles) and radar systems for guided missiles.”

The source added, “The weapons needed in Gaza are the Grad missiles, the upgraded Katyusha with a range of 40 kilometers (24 miles), anti-armor charges, explosive belts, hand grenades with a range of 150 meters, rocket-propelled grenades and anti-aircraft machine guns.”

Wassef Erekat, a former PLO artillery unit commander, told Al-Monitor, “Hamas’ disclosure will fuel more Egyptian concerns and lead Egypt to tighten the siege on Gaza even though the movement’s weapons are locally manufactured or recycled and have a shelf life and expiration. These weapons do not meet the international weapons production standards, and a number of harmful criteria, such as humidity, temperature and gravity, may affect them.”

The Israeli Ministry of Defense has issued several reports about weapons smuggled into Gaza in special packages delivered by speedboats from Egyptian and Lebanese ports and left in the Mediterranean Sea, or in barrels thrown from a specific distance into the water within accurate measurements of the water movement and air currents capable of leading them to the shores of Gaza. It is very difficult to stop such operations because it is impossible to monitor every centimeter of the coast to try to find such small packages, according to the ministry.

Hussam al-Dajani, a political science professor at Al-Ummah University in Gaza, told Al-Monitor, “The timing of Hamas’ disclosure of its military secrets is not spontaneous, as it coincides with important events. Chief among these is the regional and international struggle over gas fields in the Eastern Mediterranean and the show of naval strength in the region. Second, it comes at a time when the Palestinian factions held a meeting in Beirut. Third, it coincided with the anniversary of the 1993 Oslo Accord and the Israeli withdrawal from Gaza in 2005. Fourth, it coincided with the normalization of some Arab countries’ relations with Israel.

A Hamas official told Al-Monitor on condition of anonymity, “There seems to be a link between the timing of Hamas’ revelations on Sept. 13 and the signing of the peace agreements between Israel on the one hand [and] the UAE and Bahrain on the other in Washington on Sept. 15. Hamas may be responding to these agreements by showing off its military [strength] against Israel, as the timing also coincides with the 15th anniversary of Israel's withdrawal from Gaza in 2005 — as if it was a message from Hamas that the withdrawal was a result of its military operations against the Israeli army and settlers.”

As Hamas was revealing its secrets, the movement’s military positions across the Gaza Strip were being hidden to avoid Israeli strikes. Hamas was also making sure to hide the trucks transporting weapons and workshops for arms manufacturing.