Israel is coordinating with Egypt to stop the flow of weapons into the Gaza Strip from Sudan, by way of Libya and Egypt, reports Adnan Abu Amer. 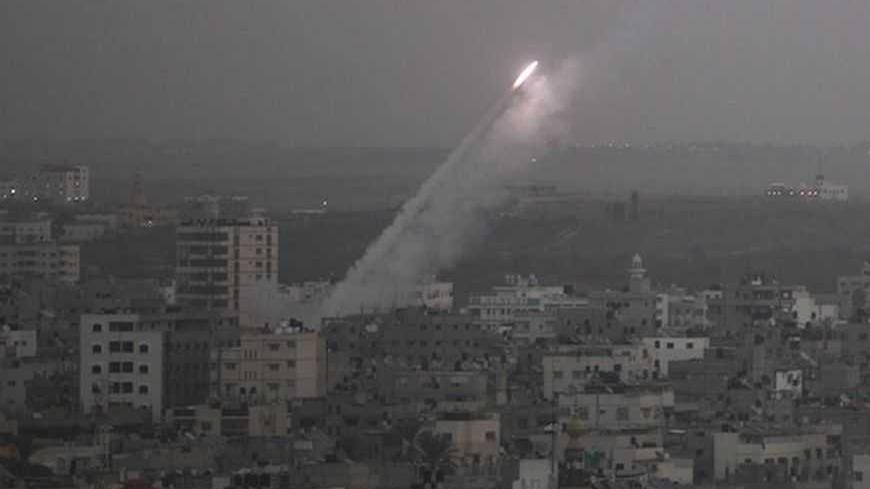 Smoke trails are seen as a rocket is launched from the northern Gaza Strip towards Israel, Nov. 17, 2012. - REUTERS/Majdi Fathi

The last war in the Gaza Strip didn't come to an end until Egypt promised Israel its unremitting efforts to stop the flow of smuggled weapons to Hamas, out of fear of Hamas's growing military strength in advance of the next flare-up. Visits have been exchanged between Cairo and Tel Aviv to discuss security efforts in this regard, the most recent of which occurred a few days ago.

From Tel Aviv’s perspective, Cairo is undergoing a "trial phase" in efforts to prevent the proliferation of long-range missiles in Gaza. Part of the weaponry used against Israel came from capitals outside its borders and had traveled thousands of kilometers, without any efforts by Egypt to prevent their smuggling. Egypt remained inactive even though the US and Israel had anticipated that the new regime in Cairo would fiercely combat arms smuggling through its territory into the Gaza Strip, since Egypt had prevented three arms smuggling operations into Gaza from Iran and Libya.

Although Israel has remained very discreet about the smuggling routes, it claims that a fair amount of the weapons smuggled into Gaza come from distant places. Israel wonders how they reached the Sinai, traversed wide expanses and entered the Gaza Strip — traveling a total distance of more than 1200 miles.

Although the Israeli Air Force controls the region's air traffic, Israel hasn't hidden its fear that new routes might open up to smuggle weapons into Gaza. As soon as Israel blocks a smuggling route, another one opens — using new ships, fake start-up companies, newly established routes and new agents. Israel believes this to be an endless intelligence war, which requires the use of international military, political and intelligence pressure on smuggling routes.

Some Israeli leaks, though they are few, have discussed the quality of the arms entering Gaza after the recent war, claiming that this is a matter of supply and demand. For the first time, this source adds, Israel has found 250- and 500-mm strike cannons loaded onto modified pickup trucks, along with shoulder-fired anti-aircraft missiles, rocket-propelled grenades, explosives and ammunition of all types.

Israel recently issued a warning about the tireless efforts made by what Israel called the "scientific body" of Hamas to produce special rocket-propelled grenades aimed at hitting Israeli territory, the so-called "favorite targets" around Gaza ever since Hamas became interested in Israeli civilian, military and maritime targets. But Hamas has so far failed to achieve its plans; the Israeli Navy thwarted the work of Palestinian swimmers, barrels and boats carrying explosives.

Another effort has been made by Israel with the United States, through a memorandum of understanding on combating arms smuggling to Hamas. A working group of several Western countries has been established to share intelligence and thwart arms smuggling by sea to Gaza. One smuggling effort, an arms shipment sent by sea, was successfully stopped. Arms suppliers are increasingly using maritime venues, and weapons are being transferred through international navigation companies and European ports, commonly using fake companies and falsified documents.

The Israeli media has recently intensified its reports about what it calls naval "successes" at thwarting weapons smuggling into Gaza, in the areas of "Marsa Matruh, Salloum and Suez," and has thanked the Egyptian security services for their operations in this regard.

James Fainting, commander of the Multinational Force and Observers in the Sinai, said that weapons, including Russian-made SA-24 missiles, have been provided for armed groups through organized smuggling operations from Libya. These missiles can target fighter jets flying at more than 11,000 feet with a high degree of  accuracy and precision.

Israeli and Egyptian security services have faced increased obstacles as arms traffickers acquire more sophisticated weapons. They use SUVs equipped with GPS and satellite phones. They cross deserted areas that stretch over 375 miles to the south-east, without being intercepted by any soldiers. Soldiers in this region prefer not to put their lives in danger, and some of them are easily bribed.

Aside from the desert road, there are four main routes to the Red Sea and the Suez Canal used before embarking on the second phase of the smuggling operation, whereby arms are transferred in the Sinai. This transfer is done through coastal or international roads leading to the Sinai or Gaza. By crossing the Suez Canal, smugglers are assured that their goods will be delivered to their final destination for two reasons. First, smugglers are very familiar with the routes and rural areas of Sinai, and they can avoid security checkpoints. Second, security checks are sparse in this area, despite the deployment of armed forces along the road to northern Sinai.

These clarifications from Israel don't come from security sources but from the confessions of detainees involved in arms smuggling. According to detainees, weapons usually originate in Sudan before entering Libya, where they are hidden. Arms are smuggled out of the “Kassla” region in eastern Sudan, located 430 miles from the Egyptian border. They are then transported into the provinces of Aswan or the Red Sea, especially in Halaib and Shalatin. The journey usually takes 15 days, during which time groups move their goods from one point to another, in exchange for cash or a share of weapons.

Any discussion of arms smuggling requires commenting on the tunnels between Sinai and the Gaza Strip. Recently, Egypt has tried to shut tunnels down by flooding it with water. Egypt has also said it's determined to get rid of them permanently. There has been growing talk about 1,200 tunnels which the Egyptian authorities are willing to flood with water, especially those adjacent to residential areas. The Egyptian authorities fear that blowing up tunnels could cause landslides that would affect the homes of the people living in the area.

From time to time, Israel draws attention to what it calls field developments on its southern border, in the areas of Sinai, Sheik Zuwaid and the Suez Canal in particular. Israel states that “fierce battles” have periodically arisen between the Egyptian Special Forces and tribes in these regions, who have transported arms to hostile organizations throughout the Middle East, in addition to the funds and goods they transfer to the Hamas movement in the Gaza Strip.

According to the Israeli side, these battles take place under the supervision and control of Western military forces that are permanently located in the Sinai. The clashes are very similar to the battles between the forces of the Pakistani army and al-Qaeda and the Taliban in the Waziristan region of northwestern Pakistan.  Egyptian forces have used tanks, artillery and fighter jets, and yet they continue to fail to control Bedouin tribes. After each round of fighting, Egyptian forces withdraw to prepare for a new wave of military confrontations anticipated in days to come.