Sinai residents prepare for the worst

Amid a deteriorating security situation the people of Sinai are raising their voices against the oppressive campaigns practiced by the Egyptian army and police that breed extremism and violence. 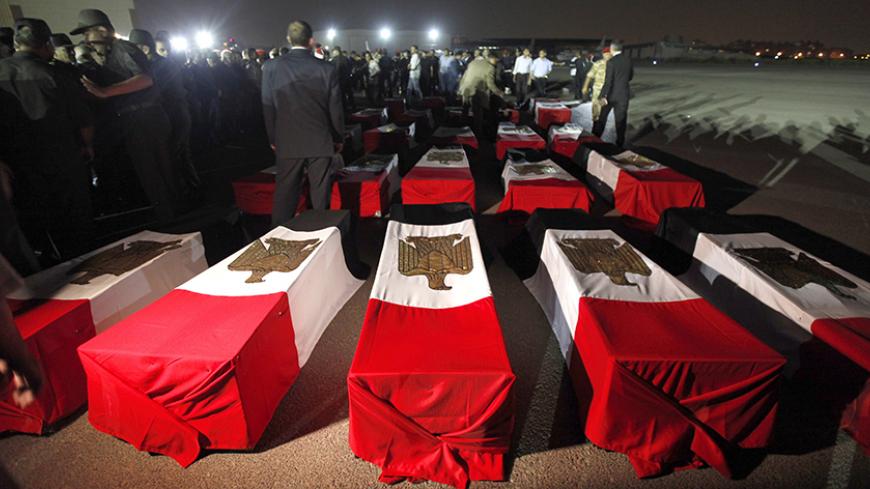 The caskets of 25 policemen killed in the early morning of Aug. 19, 2013, near the north Sinai town of Rafah lie on the ground after arriving at Almaza military airport in Cairo on the same day. The 25 Egyptian policemen were killed and three others wounded in an ambush by Islamist militants, medical and security sources said. - REUTERS/Mohamed Abd El Ghany

SHEIKH ZUWEID, Egypt — Four years have passed since the Sinai Peninsula had participated in the Egyptian revolution in such a retaliatory and armed manner, contradicting all the peaceful slogans of Cairo, as it was hoping to be liberated from the state suppression and marginalization that had been going on for more than 30 years. However, the people’s hope of change soon turned into tragedy in an area that had always remained calm; only to become a hotbed for violence and continuous conflict, further isolating Sinai from the rest of the country.

On Jan. 27, 2011, the angry and indignant people of Sinai, especially those from the cities of Sheikh Zuweid and Rafah, attacked the security institutions, causing great damage. They used all kinds of weapons, even missiles, in retaliation for what they considered years of oppression by the state. As a result, the police have lost ground in Sinai. This is not to mention the absence of the army as per the Camp David Accords with Israel, paving the way for chaos and violence in the peninsula.

Mustafa Sanjar, a researcher in the affairs of Sinai and the border region, talked about the main reasons that pushed the people of Sinai to engage in violent acts, unlike the general peaceful aspect of Egypt’s demonstrations in Cairo and other squares. “The death of Mohammed Atef, the second martyr in Egypt’s January 25 Revolution in the square [in] Sheikh Zuweid, north of Sinai, and the excessive use of violence has caused the demonstrations to veer off their peaceful course, and pushed angry people to use weapons,” he told Al-Monitor.

However, Sanjar said, “The death of Atef was a mere pretext for the angry people to embark on the path of revenge, as thousands of Sinai residents have been feeling indignant since the 2004 arbitrary campaigns to arrest people, including women and children. These campaigns were part of the investigation and prosecution of those involved in the Taba bombings, not to mention that many have been sentenced in absentia. All these reasons have pushed the people to take up arms and use the revolution as a tool of revenge.”

“On Jan. 25, 26 and even in the afternoon of Jan. 27, 2011, the demonstrations in Sheikh Zuweid remained peaceful and unarmed. People demanded the release of detainees and the abolishment of the sentences in absentia and other general demands as was the case in other squares of the country,” Sanjar added.

“We participated in the revolution to put an end to injustice,” Abu Mustafa al-Sinawi, a member of the Sawarka tribe — one of the biggest tribes in Sinai — told Al-Monitor.

“We rebelled to put an end to marginalization and suppression, to have a free media that would convey our suffering and care for us, to own our lands, to be recognized as Egyptian citizens, to join military schools and police so as to protect our homeland, to exploit our rich resources in Sinai and turn it into paradise. However, the reality on the ground was harsh, with more oppression beyond imagination and attempts to turn our lives into a new Iraq,” he said.

As soon as the police that were running Sinai withdrew by the end of January 2011, militants affiliated with religious groups from the cities of Sheikh Zuweid and Rafah, and some areas in Arish, took over the peninsula, under the pretext of protecting property. However, they soon established committees to arbitrate between citizens based on Sharia, which were known back then as the Sharia courts, amid a total absence of state institutions.

The absence of the state has led to the growth of armed religious groups, thugs, human trafficking, arms and drug smuggling. What made matters worse was the deteriorating situation in Libya. Before long, all the regime’s weapons in Libya were in Sinai, while smugglers were trying to get them into the Gaza Strip through tunnels. However, this had further worsened the situation in Sinai, turning it to a hotbed for extremism and conflicts, threatening Israel and the stability of the regime in Cairo, as well as the suffering of the unarmed civilians in Sinai.

Following the isolation of the then-elected Muslim Brotherhood President Mohammed Morsi by the army on July 3, 2013, the state returned to Sinai with a heavy presence in the fiercest military campaign, unprecedented since 1967. The campaigns aimed at eliminating armed religious groups and outlaws. They began Aug. 7, 2013, and are still ongoing today.

With these campaigns, the hopes of citizens dissipated, since the army did not differentiate between innocents and criminals, according to one of the tribal sheikhs in Sheikh Zuweid.

The tribal sheikh, who spoke on condition of anonymity for security reasons, told Al-Monitor, “The Egyptian authorities seem unaware of the consequences of the injustices that have been committed against the people of Sinai during last year and that continue until today. They do not seem to have the will to differentiate between the angry people and the terrorist groups.”

“Our situation is no different than that in Iraq and Syria,” the sheikh said. “The state is killing anyone without exception. We used to call for an Egyptian media that would focus on our suffering; now we are seen as terrorists. We used to call for water and the right to lead decent lives as citizens; now we demand not to be randomly killed, not to demolish our houses and our farms, which we cultivated with the sweat of our brows while the state has been suppressing us for the past 30 years. However, all these unjust acts will only give further impetus to the terrorist groups that feed on the security oppression of the innocent,” he added.

All these readings provided to Al-Monitor proved that the next phase could be worse should the Egyptian authorities fail to notice the growing anger vis-a-vis the bad security practices. They have already attacked the state when they found the right opportunity in the 2011 revolution.