The Egyptian media has been accused of trivializing the situation in Sinai, which either castigates or ignores residents while they are being beheaded by Islamic extremists for cooperating with the army in its anti-terrorism campaign against them. 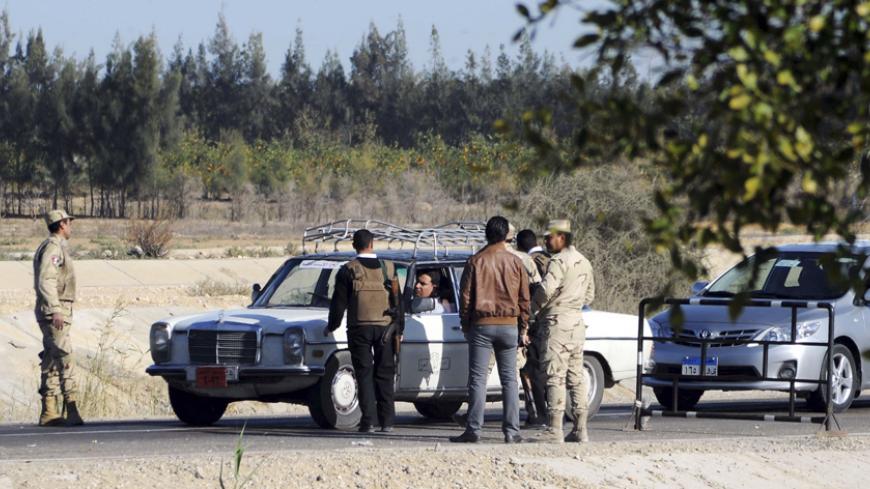 Egyptian security personnel check cars at a checkpoint near the site where separate attacks on security forces in North Sinai in the preceding days killed 30 people, in el-Arish, north Sinai, Jan. 31, 2015. - REUTERS

EL-ARISH, Egypt — “You're supporting terrorism,” the man said before he realized the cruelty of his accusation. “There are traitors in Sinai,” added the retired major general affiliated with the Egyptian liberal parties. This is how he began his conversation with me when we happened to find ourselves sitting at the same table with a group of his friends during an event in Cairo. The major general’s statements, published on condition of anonymity, illustrate how badly the Egyptian people are being informed about events in the Sinai Peninsula, be they politicians, security elites or ordinary people. What, however, is the source of such misconceptions about Sinai residents?

A Sinai sheikh requesting anonymity answered the question, stating, “The deliberate media blackout based on security directives is one of the reasons that has led to the growing suspicion and mistrust among the Egyptian people about Sinai. Egypt’s newspapers and satellite TV only report news about the death of military members shot by extremist religious groups in the Nile Valley provinces. These outlets fail, however, to convey the suffering of the Sinai people, who are plagued by repressive security practices and the dominance of armed religious extremism.”

Asked about the reasoning behind the security directives involving the media, the sheikh said, “The successive Egyptian regimes, especially President Abdel Fattah al-Sisi’s regime, have succeeded in separating Sinai from the rest of the Egyptian governorates by tarnishing our image through pro-regime reporters working for Egyptian newspapers and satellite channels. These reporters depict us as fighting, instead of supporting, the state in order to serve political agendas, as well as regional and international interests aimed at ensuring the survival of the Egyptian regime and its allies in the region, and to implement the buffer zone project, which serves Israeli national security interests.”

The people of Sinai often accuse the Sisi regime of tarnishing their image in Egyptian media, which tend to be owned by businessmen loyal to the military regime. Mohamed Hassan, a resident of Sheikh Zuweid, a border city, told Al-Monitor, “The Egyptian media outlets are biased. They call for our systematic extermination in an attempt to rally the Egyptian people around the ruling regime in carrying out ethnic massacres in Sinai to set the stage for their plans and suspicious interests.”

Mahmoud al-Kirdawsy, a pro-regime writer for the Al-Watan newspaper, requested in a Jan. 31 article that Sisi torch Sinai with napalm bombs. In an Oct. 25 article in Al-Masry al-Youm, the pro-regime author Suleiman Judeh called for the complete destruction of Sinai: “If Sinai continues to cause a chronic headache for us, then let us destroy it and burn it down. Let us chase them from the first to the last inch, so that it will be devoid of any human being.”

Activists in Sinai describe such articles as "systemic media fascism" and have countered them by writing on social networking websites about the heroism of Sinai residents throughout history in protecting the Egyptian border, helping the army achieve victories and refusing to internationalize Sinai in 1968. Meanwhile, an army officer involved in the current military campaigns in Sinai complained to Al-Monitor about “the reluctance of the people of Sinai to help the military with information or guidance in areas where the terrorists are hiding.”

On Aug. 11, 2012, Khalaf al-Menahy, a prominent tribal leader of the Sawarika tribe, the largest on the peninsula, was shot and killed by gunmen affiliated with Ansar Bayt al-Maqdis. On Aug. 7, 2013, the parliamentarian Abdel Hamid Silmi, a prominent figure of the al-Fawakhiriya family, the largest in el-Arish, was shot dead by the same group. Immediately afterward, the family announced its full support for the army in its war on terror. Dozens of Sinai tribal leaders and members, in addition to Menahy and Silmi, have been killed by Ansar Bayt al-Maqdis because of their support for the army. Local residents accuse the Egyptian media of ignoring such crimes.

Speaking to Al-Monitor on condition of anonymity for security reasons, an activist from the border town of Rafah said, “Following the 2011 January revolution, we were extremely delighted that the army had entered Sinai for the first time after the withdrawal of the police, which symbolized pain and suffering for the Sinai residents. The residents unanimously agreed on the need to support the army and to turn a new page with the ruling authorities. So, we were surprised that in its crackdowns over the past two years, the army did not differentiate between the extremists and us. The civilians are being harassed and are suffering, while terrorists are moving freely every day.”

The activist confirmed that some Sinai residents are indeed refraining from assisting the army. He said, “Most of the residents are not helping the army in the war on terrorism for several reasons. First, all civilians, without exception, were subjected to injustice by the military crackdowns in the towns of Sheikh Zuweid and Rafah, without doing anything wrong and without being differentiated from the terrorists. Second, the army did not protect the civilians who provided them with information about the extremists. Third, Ansar Bayt al-Maqdis beheaded dozens of Sinai residents for cooperating with the army, which explains the fear of beheading felt by the residents in the absence of the army’s protection. Fourth, the media did not shed light on our efforts and continues to marginalize us and depict us as demons.”

In the town al-Shalaaq, in western Sheikh Zuweid, a member of the Sawarika tribe stood next to the road leading to the town of al-Arisha at a tree under which dark blood stains were visible. The man, speaking on the condition of anonymity, told Al-Monitor that the blood stains are from one of his relatives, who was beheaded next to the family house Jan. 14 by Ansar Bayt al-Maqdis in retaliation for his cooperation with the army, including providing information on members' hiding places.

He added that a week before his relative was killed, he had been kidnapped by gunmen. His relatives approached the army to help try to find him. The army, however, showed no interest, which greatly saddened his relatives.

Ahmed, who would only provide his first name and is a member of the Armilat tribe, one of the largest in Sinai, said, “I was shocked by the talk in the media that the beheading of the Copts in Libya was the first beheading of Egyptians by the Islamic State. This is while the group is beheading dozens of Sinai residents along public roads for helping the army.” Ahmed added, “What hurts the most is that the EU has condemned the beheading of the Sinai residents by terrorists, while the voice of the officials and journalists, who are inciting [Egyptians] against us, has not been raised.”