After joining IS, Ansar Bayt al-Maqdis expands in Egypt

Terrorist group Ansar Bayt al-Maqdis is developing its strategy and tactics after joining the Islamic State, and threatens to spread the violence to Egyptian cities outside Sinai. 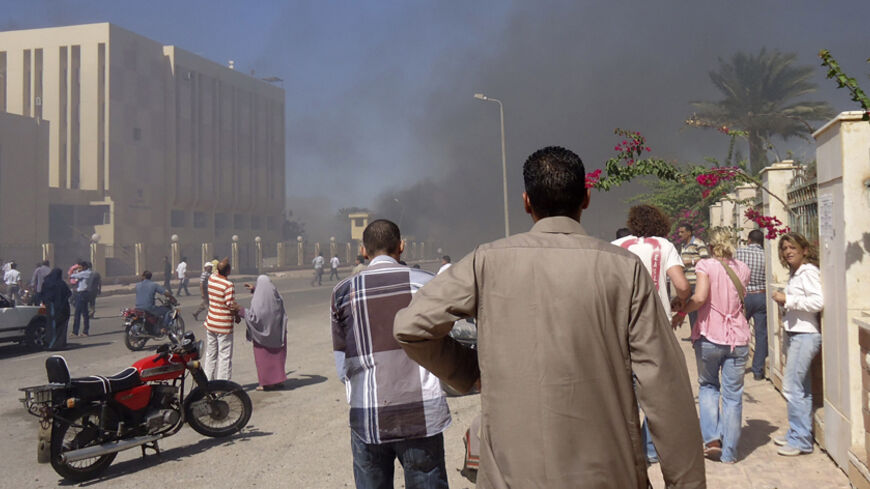 Residents and tourists watch as smoke rises near a state security building after a blast in southern Sinai, Oct. 7, 2013. - REUTERS

A correspondent in Sinai
December 1, 2014

EL-ARISH, Egypt — The war has become more complicated in the Sinai Peninsula in the past few weeks after the Islamic State (IS), namely Ansar Bayt al-Maqdis in Sinai, began using traps and remote bombing in its confrontation with the Egyptian army. This has multiplied the difficulties facing the Egyptian army in fighting the terrorists who have mastered the art of hiding in the region’s arid environment.

According to field information gathered by Al-Monitor over the past 30 days, the terrorist group Ansar Bayt al-Maqdis has planted 21 bombs almost daily along several routes taken by the army and security officials in north Sinai in the areas stretching from el-Arish to Rafah and Sheikh Zuweid.

The security apparatus has succeeded in discovering and dismantling seven bombs, while 14 others exploded. Six bombs targeted military vehicles, killing four security men and wounding 24 others, some of whom were in critical condition, mostly soldiers and officers. Eight bombs exploded without hitting their target.

A researcher specializing in security affairs and jihadist groups in Sinai spoke to Al-Monitor on condition of anonymity for security reasons, saying, “Ansar Bayt al-Maqdis is increasingly using bombs because they are unable to face the Egyptian army, which is better equipped and larger. As a result, the army outdoes them in direct confrontations, which it is well trained for.”

The researcher said, “We cannot in any way monitor all roads to prevent planting bombs. The targeting and triggering of explosive devices are done remotely by relying on communications technology. The army tried to prevent these attacks by shutting down mobile networks during daily military movements, from 4 a.m. until 6 p.m. However, the terrorists recently relied on wireless networks and UHF radios, and equipped themselves with electronic intensifier technology to strengthen the signal for detonating bombs from a distance of up to one kilometer [0.6 mile].”

A source sympathetic to the jihadists spoke to Al-Monitor on condition of anonymity and warned that the bombing operations might move to the center of el-Arish, the capital of north Sinai. “With the noose being tightened on the Ansar Bayt al-Maqdis group and with the increasing daily military operations against the southern villages of Sheikh Zuweid, the members of the group headed to the center of el-Arish in an attempt to escape the security [operations]. It is likely that they are planting bombs along internal roads of the city, where security and military armored vehicles constantly move without taking any safety measures,” he said.

The jihadist source also warned of moving these operations outside north Sinai, especially to tourist cities in south Sinai, such as Sharm el-Sheikh and Dahab, in addition to other districts in the Nile Valley and in Cairo.

“Ansar Bayt al-Maqdis militants do not exceed 50 [people] inside Sinai, but the group has lately succeeded in opening fronts inside other Egyptian districts, especially after pledging allegiance to IS. Several people who had always dreamed of the jihadist caliphate joined the group, in addition to defecting members from the Muslim Brotherhood, notably those holding a grudge against the state due to the Rabia and al-Nahda massacres,” the source said.

Indications on the ground confirm the accuracy of the information relayed by the jihadist source. In the evening of Friday, Nov. 28, Ansar Bayt al-Maqdis — or Wilayat Sinai as it is now called — claimed responsibility for the assassination of a colonel and two soldiers from the Egyptian army in the Suez bridge area in the heart of Cairo, and the killing of an officer and a soldier in Qalyubia governorate. The group declared in an online statement that the two attacks were carried out by a brigade affiliated to it and called the Martyr Abi Ubaidah al-Masri Brigade.

All the latest terrorist operations carried out by Ansar Bayt al-Maqdis confirm that the group relies on the remote targeting strategy in booby-trapping operations, assassinations or bombing of vital state infrastructure such as gas pipelines. This also confirms that the organization is avoiding direct confrontation with the Egyptian army, fearing the loss of its few members, according to sources close to the organization. Moreover, activists and observers in Sinai fear the increase in members of terrorist organizations in the future, if the state continues to fight terrorism with foul practices that harm civilians in the peninsula.

Regarding the bombing of the gas pipelines in Sinai, the jihadist source said that Ansar Bayt al-Maqdis will keep bombing gas pipelines for three reasons. “First, the organization wants to regain its media momentum to prove that it is facing the tough military campaigns in Sinai. Second, it wants to cause losses to the army's economic structure — a structure that greatly relies on the huge profits from cement factories in the center of Sinai and uses gas in its work. Third, the organization wants to stop pumping gas exported to Jordan because the latter joined the anti-IS international alliance.”

The Egyptian army’s cement plants and other plants owned by businessmen close to the ruling regime in Cairo are suffering losses due to the suspension of production, which is described by one of the workers in these plants as a disaster. Meanwhile, the state is also suffering substantial losses. An officer at the Egyptian Natural Gas Co. (Gasco), the main operator in charge of gas repairs in Sinai, told Al-Monitor on condition of anonymity that every time a pipeline is blown up, the repairs cost millions of Egyptian pounds paid from the state budget.

The Gasco source said that the losses also affected Jordan, which depends on Egyptian gas to generate electricity, stressing that it is impossible to secure the gas lines that are exposed and stretch over 100 kilometers (62 miles) in the vast desert. “This violates the economic contracts signed with Jordan and exposes the two countries to significant economic losses,” he said.

One of the managers at the Sinai cement factory, in the industrial zone affected by the gas explosions in central Sinai, told Al-Monitor, “The citizens will incur the consequences of the losses and terrorist operations, including the bombing of the gas pipeline.”

“The repeated bombings prompted the departments in charge of the operation of the plants — whether private or military plants — to raise the sale price by 25% as a result of the increase in the production cost. This increase came in response to attempts to replace gas with diesel, which is more costly, especially in terms of transportation to central Sinai,” he added.

It is noteworthy that el-Arish’s gas pipeline has been bombed 25 times since the regime of former President Hosni Mubarak was toppled.

All information and analyses from the field indicate that the coming phase will be very tough for Egypt, with the potential shift of violence from Sinai to the core of Egypt.