Tribal elders in the Sinai Peninsula say links are growing between local jihadists from Ansar Bayt al-Maqdis and the Islamic State of Iraq and al-Sham (ISIS). 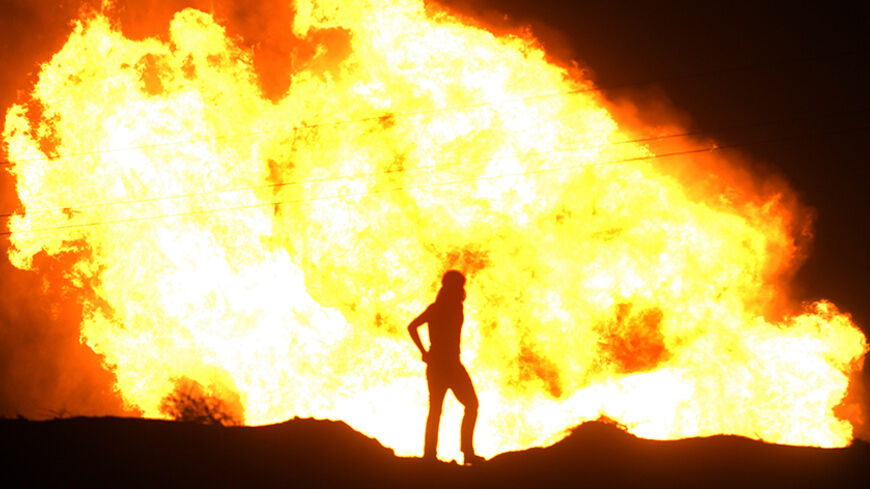 Flames rise from an Egyptian pipeline distribution station after an attack in the Sinai Peninsula, July 12, 2011. - REUTERS

RAFAH, Egypt — Following its rapid advance across Iraq, the threat of the Islamic State of Iraq and al-Sham (ISIS) is casting its long shadow over Egypt’s Sinai Peninsula. The latter is a fertile and convenient environment for the organization’s expansion, particularly considering the presence there of jihadist factions said to be affiliated with ISIS, causing concern for the region’s inhabitants.

“Sinai may become Egypt’s Iraq,” said a clan elder from the village of al-Mahdiya, adjacent to the Israeli border, speaking to Al-Monitor. He meant that Egyptian authorities might lose control of the peninsula, leading to its transformation into a "playground for extremist terrorist organizations," as he put it.

The elder, a man in his 60s who requested anonymity for fear of reprisal from security agencies or terrorists, believes that the Sinai Peninsula could become an unexpected hell for Egypt and its neighbor Israel. He said, “The Egyptian and Israeli authorities are working together on the implementation of a plan to eradicate life from Sinai under the guise of a war against terrorism, which is affecting a large number of innocent people. Both countries think that their agreements pertaining to this frightening reality will transform the area into a peaceful oasis for both sides.”

He opined that peace can never be achieved in Sinai Peninsula at the expense of the region’s inhabitants, adding, “When people are subjected to injustices, poverty and starvation in Sinai, the natural progression is for extremist organizations to rise. These include organizations such as the terrorist Ansar Bayt al-Maqdis, which exploits the oppressed who join it to take revenge upon the state and the army, as is occurring right now. I assure you that what is currently occurring in Iraq, and ISIS control over different areas of the Iraqi state, might recur in Sinai soon. The environment here is exactly similar to the one present in Iraq. There, [Prime Minister Nouri] al-Maliki marginalized and oppressed the Sunnis, leading to the latter’s support for ISIS in search of vengeance. In Sinai, similarly, the state has been harshly marginalizing and persecuting us. As a result, Sinai has become home to a terrorist organization with close ties to ISIS, namely Ansar Bayt al-Maqdis.”

Despite the elder’s insistence that ISIS supported Ansar Bayt al-Maqdis in its 10-month campaign of attacks against the Egyptian army and security forces in the Sinai Peninsula, relying on information that he received from young men who fight with Ansar Bayt al-Maqdis, Al-Monitor reached out to other sources of information about the possible connection.

Abu Musab al-Armeli, a member of the Armilat clan, one of the largest in the Sinai Peninsula, told Al-Monitor: “Three young men in their 20s from my clan fight with ISIS in Syria. One of them was wounded in clashes between them and the al-Qaeda-affiliated Jabhat al-Nusra.”

Concerning his kinsmen’s affiliations, Armeli said, “Prior to going to Syria, they were members of Ansar Bayt al-Maqdis in Sinai and espoused an extremist Salafist jihadist ideology. One of them traveled across the Egyptian-Israeli border in central Sinai and then continued on to Syria with the help of drug traffickers. The rest took the Jordanian smuggling routes. My relatives say that they went to Syria to fight a jihad in defense of God, and to live in an Islamic state that applies the laws of God. One of them communicated with us recently and said that they would be returning soon to Sinai, when the ‘soldiers of God’ achieve victory over the tyrant [meaning the Egyptian army] that protects the Israelis and prevents the initiation of a holy war against them. He also stressed that Sinai would soon be part of the Islamic caliphate, when God grants victory to the soldiers of Ansar Bayt al-Maqdis.”

Al-Monitor observed the military and security forces tightening security along the border with Israel as well as the entrances and exits of the Sinai Peninsula. One officer in the North Sinai Security Directorate, who wished not to be named, told Al-Monitor, “We have clear and strict instructions from Cairo to tighten measures as much as possible, particularly after we received security information indicating the intent of some terrorists to return here from Syria.

“Dozens of extremist terrorist groups traveled to Syria to train for combat and the execution of terrorist operations, particularly the building of booby traps and their remote detonation. Their misguided aim was to transform Sinai into an Islamic emirate. Security forces succeeded recently in capturing a number of those trained elements when they attempted to return to Egypt,” the officer added.

Al-Manihi, a member of the Sawarka, another of Sinai’s largest clans, told Al-Monitor, “Sinai’s Ansar Bayt al-Maqdis group is affiliated with ISIS. It arose from the remnants of the Tawhid and Egyptian Islamic Jihad branches in Sinai, the latter being responsible for the bloody terrorist attacks of Taba in 2004. Everyone knows that ISIS originated in Iraq under the leadership of Abu Bakr al-Baghdadi, forsaking al-Qaeda’s tutelage when it refused to pledge allegiance to [Ayman] al-Zawahri, upon [Osama] bin Laden’s death.”

Based on information received from members of the organization in the Sinai Peninsula, Manihi, who wished to reveal only his surname, affirmed that Ansar Bayt al-Maqdis received financial aid from ISIS in return for the former continuing to conduct operations against the Egyptian army. He said, “According to the information that I have, Ansar Bayt al-Maqdis concurrently receives monetary support from a number of sometimes-opposing global organizations such as al-Qaeda and ISIS as well as foreign intelligence services.”

At the end of August 2013, police forces in northern Sinai arrested an individual by the name of Adel Hebara, who they accused of belonging to Ansar Bayt al-Maqdis in the Sinai Peninsula and of participating in the second Rafah massacre, in which 25 Central Security Forces officers were killed.

In the case against him, the court listened to several telephone calls between Hebara and an ISIS member in Syria, in which the latter promised to transfer $10,000 in return for the execution of operations in the Sinai Peninsula and the swearing of allegiance to Baghdadi. Hebara accepted the conditions. Security forces later leaked those telephone calls to the “Black Box” program aired on Al-Qahira Wal Nas satellite channel.

The message read as follows: “Keep your faith in the religion of God, may he be praised, and know that you are in the right. Do not slacken, no matter how much people betray you or work against you. Our hearts, men and available resources are at your service, for we all fight to establish the rule of God’s laws. God willing, we shall be one to cooperate in enforcing religion, and God will not divide us, neither through borders, nor nationalities, for we are with you in heart, substance, effort and money.”

In border villages where militants are present, close to the cities of Sheikh Zuweid and Rafah, inhabitants have reported seeing gunmen waving the black ISIS flag and carrying banners emblazoned with “Islamic State,” though the words Iraq and Levant were absent, they stated.

Abu Alian, who lives in the border village of al-Joura, south of Sheikh Zuweid, told Al-Monitor, “There is no difference between Ansar Bayt al-Maqdis and ISIS. They conduct the same barbaric operations, particularly in their public street executions of soldiers and tribal elders who supported the army. All doubters have to do is watch the bloody videos online shot in Sinai or Iraq.”

Notwithstanding Ansar Bayt al-Maqdis announcing its allegiance or lack thereof to ISIS, the main fear of Sinai’s inhabitants is that the Egyptian peninsula will become a nightmare that threatens this geographically important area, particularly if Gaza’s extremists unite with their Sinai counterparts to build their dream religious caliphate.