Information is emerging that al-Qaeda’s growth in the region is extending into the Sinai Peninsula and across Egypt. 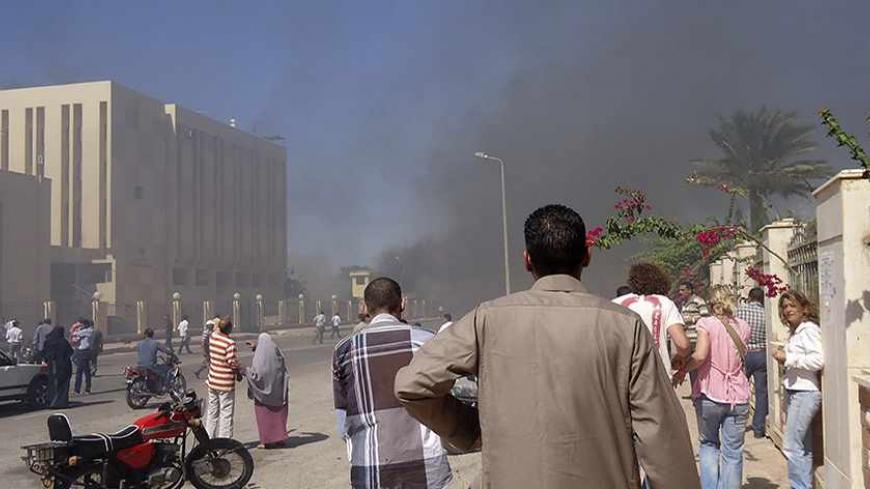 Residents and tourists watch as smoke raises near a state security building after a blast in South Sinai, Oct. 7, 2013. - REUTERS

CAIRO — During the last week of August, I spent a few nights in the villages of the northern Sinai Peninsula where Islamist militants have been hiding and operating since the January 25 Revolution. It was a pitch-black night when I drove around with a tribal kingpin; he took back roads, drove slowly, turned off his headlights and clearly knew the consequences of being spotted by a military checkpoint.

"This is Abu Mounir's mosque; it's run and controlled by Al-Tawhid wal-Jihad," he said as we drove into Muqataa village. I had seen the mosque before and heard stories of its jihadist cleric and operational commander, Sheikh Abu Mounir. "They are not as powerful as Ansar Bayt al-Maqdis [Partisans of Jerusalem], Majlis Shura al-Mujahedeen [Mujahedeen Shura Council] or Al-Salafeyya al-Jihadeyya [Salafist Jihadist Group], but they are widely feared as well," he added.

"They are different groups, but they coordinate and sometimes run shared operations … and they are affiliated to al-Qaeda in one way or another," said the tribesman

"They publicly appeared at the funeral held for Ansar Bayt al-Maqdis' dead members. Some white, almost blonde people stood out at the funeral," he said when referring to a massive funeral that took place on Aug. 10, which commemorated four jihadists killed in a military attack that targeted them in Ajraa village before launching rockets toward Israel. The funeral was attended by hundreds of people and dozens of trucks sporting al-Qaeda's black flags.

Days after our talk, the Egyptian military shelled Abu Mounir's mosque. The commander survived this attack but was caught and killed in a military ambush close to his mosque in Muqataa on Nov. 25.

According to Al-Masry al-Youm's published leaks, during their phone communication after the execution of the 25 soldiers in August, "Abu Sohail congratulated Habbara and informed him that he would send $10,000 to support his group's work."

"Abu Sohail commanded Habarra to film the training of his group's members with machine guns and rocket-propelled grenades and announce their allegiance to Abu Bakr al-Baghdadi, chief of al-Qaeda's Islamic State in Iraq and the Levant (ISIL)," the article continued.

Since Ansar Bayt al-Maqdis declared its responsibility for bombing the northern Sinai Peninsula natural gas pipeline in 2011, al-Qaeda's Egyptian leader Ayman al-Zawahri applauded them and called for more operations. More recently, he has encouraged the jihadists in their war on the Egyptian authorities without reference to specific operations. But Zawahri, who worked closely with Osama bin Laden for more than two decades, strictly followed the al-Qaeda doctrine.

One of bin Laden's main al-Qaeda rules was the "centralization of decision and the decentralization of execution," which meant that top commanders would give orders but would not take part in planning or executing the attacks, a rule applied to the fullest extent that al-Qaeda's commanders sometimes did not know the identity of the field planners or executors until the operations were completed. Since the September 2001 attacks on the United States, bin Laden and Zawahri were forced to further adhere to their rule due to their geographical isolation.

On Nov. 19, Ansar Bayt al-Maqdis published a video showing preparations for a suicide bombing that targeted the South Sinai Security Department. The video, which featured a teenager being strapped with an explosive vest before riding a pickup truck loaded with explosive tanks and showed the moment of the explosion, played a segment from a speech by Abu Omar al-Baghdadi, the former head of al-Qaeda's Islamic State in Iraq (ISI), which later evolved into ISIL.

And on Dec. 1, another video was published by the group showing the most recent major attack, where an explosive vehicle was detonated at a military convoy on the way from the border town of Rafah to northern Sinai Peninsula's capital El-Arish. The attack on Nov. 20 left 11 soldiers killed and several injured. The video also features parts of Abu Omar al-Baghdadi's speeches.

The reference to al-Qaeda's ISI in different video statements by Ansar Bayt al-Maqdis and the published leaks of Habbara's investigation documents seemed to be more than just a coincidence. Since the Syrian civil war erupted in 2011, tens of thousands of Syrian refugees landed in Egypt in search of employment, some of whom arrived through Jordan to the southern Sinai Peninsula's port of Nuweiba, while others arrived to the northern Sinai Peninsula from other parts of Egypt.

Aside from the Syrian refugees, thousands of Egyptians from almost every province — including the Sinai Peninsula — arrived in Syria via Turkey to join the ranks of rebel militias such as those of al-Qaeda. The numbers of Egyptian fighters heading to Syria allegedly increased under ousted President Mohammed Morsi, who announced cutting all ties with Syrian President Bashar al-Assad's regime and declared Egypt's full endorsement to the rebels.

The records of Egyptians who traveled to Syria are mostly inaccurate due to the chaotic situation at the Turkish border. And if journalists from different nationalities can travel into and out of Syria unannounced, then al-Qaeda-affiliated elements definitely can.

Along with the al-Qaeda elements, confirmed to have been operating in Egypt by official and unofficial sources, came the al-Qaeda-style suicide bombings and explosive vehicles that began targeting government facilities and personnel in the aftermath of Morsi's military-backed ouster on July 3 — a surge in militant attacks unprecedented since the 2011 downfall of President Hosni Mubarak and his ruthless security and intelligence apparatus that hunted Egyptian jihadist elements in Egypt and countries such as Sudan, Yemen, Jordan, Syria and the Gulf states.

The links between Egypt and al-Qaeda in Iraq have existed for years. Up until 2010, the deputy chief and military commander of the ISI was the Egyptian Abu Ayyub al-Masri, a student and member of Zawahri's Egyptian Islamic Jihad since the 1980s and allegedly an expert in explosive trucks and roadside bombs who flourished in bin Laden's Afghanistan camps in the 1990s. He later became one of Abu Musab Zarqawi's top officers.

A US-led attack killed Masri in April 2010 along with his chief, Abu Omar al-Baghdadi, who is regularly shown in video statements by Egypt's Ansar Bayt al-Maqdis.

So far, security officials have not published any statements tackling al-Qaeda's arrival and operations in Egypt in detail. But leaks, bearing no confirmation but that of local newspapers claiming to have received them from unnamed security officials, continue to signal ties between Egypt's militant groups and al-Qaeda's most operational branches in Iraq and Syria.

Despite claims by several Islamists that Egypt's militant groups have no organizational ties to al-Qaeda, the surge in militant attacks suggests otherwise. Within five months, six explosive trucks targeted military and security facilities and convoys including that of the minister of interior in eastern Cairo, in addition to dozens of roadside bombs that hit military and police vehicles in the northern Sinai Peninsula.