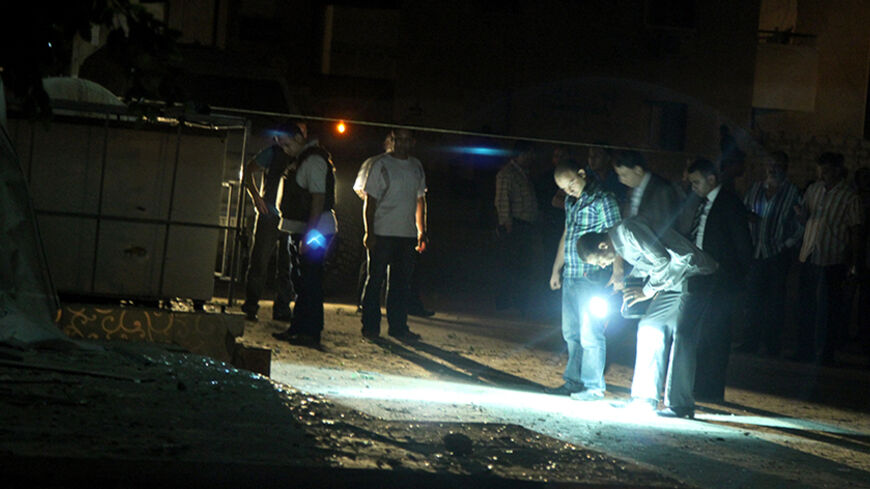 Egyptian police inspect a site where militants fired a mortar shell at a military base in El-Arish in Egypt's northern Sinai, killing a soldier and seven civilians, July 13, 2014. - STR/AFP/Getty Images

CAIRO — Ansar Bayt al-Maqdis, which has made numerous, painful terrorist attacks against the Egyptian government over the past three years, leading to the deaths of hundreds of army soldiers and police, broadcast an audio recording announcing its pledge of allegiance to the most funded, organized and influential (terrorist) organization at the moment — the Islamic State (IS).

Meanwhile, a leader in Ansar Bayt al-Maqdis called for the organization's targets, which have been concentrated in Sinai, to be shifted to Cairo to hit the ministries and headquarters of the Egyptian government.

Najah Ibrahim is one of the founders of Gamaa Islamiya, an Egyptian Islamist organization that peacefully campaigns for a religious state, and a former member of its Shura Council until he split from it because he believed that the Shura elections held in May 2011 were neither impartial nor transparent.

He told Al-Monitor, “The pledge of allegiance made by Ansar Bayt al-Maqdis to IS at this time is a rescue call from Ansar Bayt al-Maqdis to IS in light of the full blockade against the group in Sinai at all levels following the attack on Karam al-Kawadis [military base]. This attack was the most violent ever perpetrated by the group against the Egyptian army, in Sinai, on Oct. 24. Members of the group carried out a suicide attack using a car filled with TNT. They placed a bomb on the road leading to the ambush’s location to stop the forces coming to save the victims. Following this, Ansar Bayt al-Maqdis killed the survivors of the ambush and confiscated their weapons."

IS understood the message and issued a statement from its leader Abu Bakr al-Baghdadi the very next day accepting the pledge of allegiance and calling for the unification of all the groups. Following this, Ansar Bayt al-Maqdis changed the name of Sinai province to Sinai Wilaya, as it is no longer an Egyptian province but part of the Islamic caliphate, according to the group.

IS asked its supporters to go to the nearest wilaya and announce their obedience to its wali. It also stated its support for the attacks of Ansar Bayt al-Maqdis against the Egyptian army.

This can be interpreted as a call to carry out operations in the heart of Cairo to lift the siege on the mujahedeen, as they claim. This means attacks from individual random acts of violence and targeting metro trains, power stations, police cars and sewage and water networks to disrupt the Egyptian state and disperse its efforts through improvised and primitive explosive devices.

Ibrahim said Ansar Bayt al-Maqdis was playing for time through this pledge of allegiance because this alone would not lead to an influx of mujahedeen to Egypt. This is because of the strong return of the security state under President Abdel Fattah al-Sisi and the destruction of many tunnels, which has reduced the number of weapons smuggled into Egypt.

Ibrahim said the transfer of terrorist operations to the heart of Cairo was being carried out through a group affiliated with Ansar Bayt al-Maqdis and within the Circassian population of Egypt.

The hotbed within this community was dealt a strong security blow a year ago that led to the killing of a number of fighters who carried out bombings against the Cairo Security Directorate and the Dakahlia Security Directorate. These fighters attempted to assassinate the Egyptian interior minister and capture 21 barrels of genuine explosives, rather than improvised explosives they had been relying on. This means that their consideration of transferring operations to Cairo is not happening by chance, but is the result of vigilant security services that temporarily stopped their operations in Sinai.

For his part, Maj. Gen. Zakaria Hussein, former chairman of the Nasser Military Academy, told Al-Monitor that despite its various branches, terrorism remains one tree and all the organizations, despite their different denominations, aim at establishing the Islamic project. They all want a caliphate based on fear, intimidation, destruction, beheadings and showing the ugly image of Islam, knowing that this image pushed some Muslims toward atheism.

“Ansar Bayt al-Maqdis’ allegiance to IS will not lead to something new. The sources of financial and military funding are the same and have the same goals. The regional and international powers helping and funding these groups will regret their support as soon as the operations are transferred to their territory,” Hussein said.

Hussein said IS and Ansar Bayt al-Maqdis can dream of whatever they please, but the question is whether they will be able to make their dreams come true. The Egyptian army, which ranks as the 13th most powerful worldwide, will not be affected.

Hussein predicted failure for these groups and said that the biggest proof was their announcement of the transfer of operations to Cairo: Those who really want to take action do not announce it beforehand to keep the element of surprise.

“No changes will be made to the Egyptian army’s long-term strategy, [which is] aimed at drying up the sources of terrorism because of a few reports from here and there,” Hussein said. “The Egyptian army is having overwhelming success. Chief among these successes was the Damietta operation, when the Egyptian forces confronted a group of terrorists who tried to take control of an Egyptian naval boat near the city of Damietta to use it to hit ship transports carrying 200 troops. The Egyptian armed forces succeeded in preventing the operation, and killing a number of attackers.”

Maj. Gen. Hossam Suwaylim, former director of the center for strategic studies within the army, said Ansar Bayt al-Maqdis’ allegiance to IS was only pro forma and represents a worthless allegiance aimed at fortifying the group's image through a failing organization like IS, which has had most of its leaders killed. He said, “IS has failed to enter Kobani in north Syria for over a month and the regular Iraqi forces have expelled it from the city of Beiji in Iraq. Moreover, IS has incurred heavy losses over the past month and the end of this satanic organization is drawing near. Regarding Ansar Bayt al-Maqdis, it is gasping for breath and we heard through our surveillance system that it has made a rescue call to its bases in Gaza, which are affiliated with Palestinian militant Mumtaz Dughmush and Hamas.”

Suwaylim said moving its operations to Cairo on the instructions of the Muslim Brotherhood with the coordination of all the terrorist groups was aimed at creating chaos on Nov. 28. The Salafist party called on the people to take to the streets, while holding the Quran, on this specific day. The chaos is expected to continue up until Jan. 25, the anniversary of the January 25 Revolution that ousted Hosni Mubarak.

Suwaylim said these calls would neither shake the state nor the regime.

Suwaylim added that the security system should consist of four dimensions — information, forces, pre-emptive strikes and deterrence: The first three dimensions are efficiently and effectively available, but there is a need for the fourth dimension, deterrence, since no death sentence has been applied.