The economic conference held in Sharm el-Sheikh surprisingly went through with no security incidents, as some Sinai residents say that the Egyptian security forces imposed strict measures to prevent any armed attack. 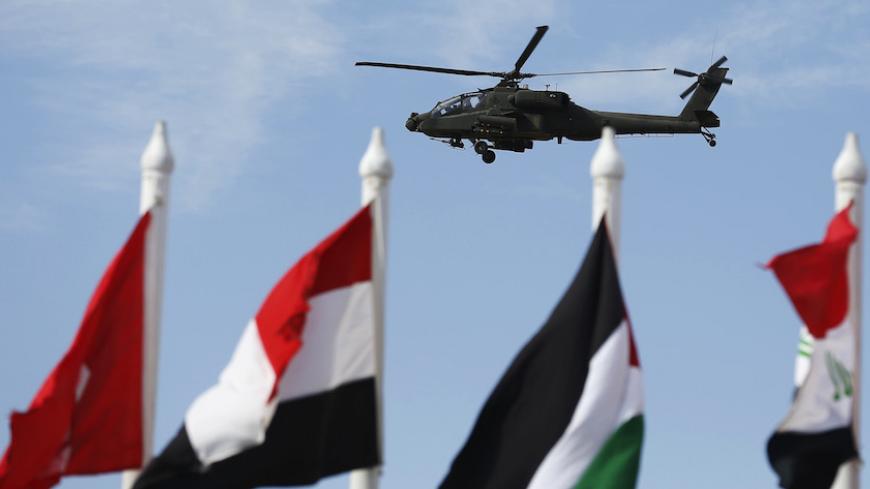 EL-ARISH, Egypt — Amid various media statements by Egypt's opposing religious and military forces about the feasibility of the economic conference in Sharm el-Sheikh, the conference's security was a success, coming amid suspicions that terrorist organizations would attempt to thwart the participation of 90 Arab and foreign countries in support of Egypt's faltering economy.

Egyptian President Abdel Fattah al-Sisi's military regime managed, once again, to thwart threats from its opponents, be they the Muslim Brotherhood, which explicitly called for the need to undermine the conference, or Ansar Bayt al-Maqdis terrorist group. The latter’s sporadic targets aim at destabilizing the regime that opposes its religious expansion, described by the majority of the Egyptian people as extremist.

A researcher specializing in the affairs of the Sinai Peninsula and the armed groups said, on condition of anonymity, that the holding of the conference without any security obstacles or terrorist operations is a winning card that supports Sisi globally.

The researcher further told Al-Monitor: “Sisi had planned to hold the conference in Sharm el-Sheikh, one of the cities of the Sinai Peninsula, which is witnessing violent terrorist attacks carried out by the most powerful terrorist organizations worldwide. It was a smart move aimed at showing the world that he can eliminate terrorism despite all the threats. It looked as if he was saying that if you do not support my policy, the equation will change.”

The researcher added, “The world is aware of the seriousness of the terrorism spread in Egypt, especially in Sinai, which is an important strategic hub. The peninsula is close to the Israeli-Palestinian conflict, which is the basis of the conflict and the lack of stability in the Middle East.”

He continued, “I am confident that following the conference, Sisi will garner the support of all Western countries, despite their constant concern over his lack of respect for freedoms and human rights and his repression of opponents. However, these Western countries’ rejection of the repressive dictatorship policies can never come at the expense of accepting the extremist religious alternative [in reference to the Islamic State (IS)], which threatens to commit slaughter and destroy empires through violence and extremism.”

The absence of terrorist attacks during the period of the conference, March 13-16, led various media personnel and Egyptians to raise questions and accusations on social networking sites about the existence of a link between the ruling regime and the terrorist groups, especially Ansar Bayt al-Maqdis (or Wilayat Sinai).

Amr Adib, a pro-Sisi TV host, said in one of his episodes on YouTube, “Why have the bombings stopped since the very beginning of the conference until its very end?” Pro-Muslim Brotherhood presenter Mohammed Nasser replied by saying, “You should know why,” implicitly accusing the regime of masterminding terrorist operations.

Two weeks before the conference, Ansar Bayt al-Maqdis targeted four military vehicles in different parts of el-Arish and Sheikh Zuweid with improvised explosive devices. The operation claimed the lives of seven members of the military and wounded 14 others. Also on March 10, the group carried out a failed attempt to penetrate the central security camp in el-Arish with a booby-trapped car full of 10 tons of explosives driven by a suicide bomber. Thirty recruits were wounded and a fuel truck supplying military equipment for a separate operation was burnt. Two water transportation trucks were hijacked along with two cars belonging to the Ministry of Electricity and Energy. These will likely be used in future suicide attacks.

Does this tip the balance in favor of a conspiracy theory whereby there is a relationship between the ruling regime and terrorism? Otherwise, why have the terrorist operations ceased during the period of the conference?

A defector from a Salafi jihadist organization in Sinai answered this question and told Al-Monitor on condition of anonymity, “The Wilayat Sinai (Ansar Bayt al-Maqdis) control and monitoring unit failed to find ways to enter south Sinai and carry out a major operation that it had planned and thwart the conference. The same happened in northern Sinai,” he said. “It was hard for them to secure their route.”

“It is impossible for security forces to control the valleys and desert roads between the mountains and sand dunes connecting north and south Sinai. These cannot even be monitored by planes. However, the security forces relied on Bedouin tribes in the south knowing that a lot of Bedouin were armed and spread [out] in the mountain roads,” he said.

“A suicide car bomb was aimed at targeting any area in south Sinai, not necessarily Sharm el-Sheikh — even if the targeting were to fail — in order to bring about a universal resonance in the media and thwart the conference, but they could not carry out the operation because of the complex security measures, particularly the use of nomads in south Sinai,” he added.

Al-Monitor managed to contact a sheikh from the south Sinai tribes to make sure that these were relied upon in securing the conference. The sheikh, who refused to disclose his identity, said, “Yes, we contributed to the success of this global event, and we are the people to benefit the most from the return of tourism to the land of peace, Sinai.”

The sheikh told Al-Monitor: “Our mission was to protect the roads and desert valleys from armed men. Our mission was to monitor and report to the security forces immediately, while the security forces were operating in a joint operations room that brought together forces from the police, national security, the special forces, army troops and air force. We were communicating with the operations room in the event of any danger or any activity on the part of strange elements.”

The sheikh refused to disclose whether or not they are armed. “It does not matter. What is important is to reject all the violent acts that destroyed our future, our lives and livelihood,” he said. “The livelihood and economy of the south Sinai Bedouin rely on tourism, and terrorism is our primary enemy as it destroys our families and future.”

In contrast, a Bedouin from north Sinai working in a private security firm that secures tourist villages and transfers funds to south Sinai, told Al-Monitor on condition of anonymity, “A security major-general treated me badly and took the arms from all those whose ID said they belonged to north Sinai. He asked one of the officers to detain us, check our IDs and see where we got them from because [he said] that they are definitely forged and that people of north Sinai are all terrorists.”

In north Sinai, security measures were unfair. Electricity was continuously cut in the towns and villages of Sheikh Zuweid and Rafah for three days, roads were blocked, tight security measures were taken, fortifications were set in the vicinity of the security and military headquarters amid intensive hovering of drones and sporadic shooting of fire and heavy artillery, with extensive military campaigns and random arrests of citizens.