Salafists say the military does not seem to be able to distinguish between ordinary citizens and militants. 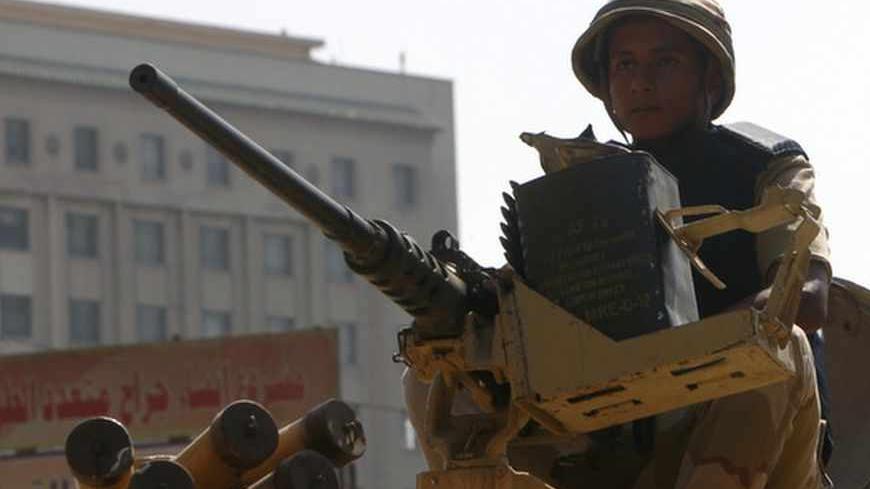 NORTH SINAI, Egypt — Salafist residents of the Sinai Peninsula, including those who once collaborated with Egypt's authorities to contain a security breakdown that followed the January 2011 uprising, are protesting a wave of persecution that accompanied the security crackdowns on armed groups waging attacks on security personnel and facilities since the July 3 ouster of President Mohammed Morsi.

The ultraconservative, bearded men complained that the security crackdowns failed to differentiate between ordinary, apolitical citizens who happen to look devout, and members of militant groups attacking the state. They condemned the militant attacks, but harshly scolded the state for unleashing its fury on everyone, including innocent civilians.

They warned that the continued radicalization would ultimately push peaceful citizens into carrying arms against what they described as "a Mubarak-style brutality."

"We are against all forms of violence, but we are also against the fact that we cannot step foot on the main road because we will be detained for the way we look," Mohamed Abu Bilal, a bearded prominent member of North Sinai's powerful Al-Menaei clan, told Al-Monitor in the town of Mehdeyya, a conservative Bedouin stronghold south of the border town of Rafah.

Abu Bilal, who leads the prayers at a Rafah mosque, is most prominent for the war he personally led on traffickers of African migrants across Sinai. Since the January 2011 uprising toppled Hosni Mubarak's ironfisted dictatorship and gave unprecedented freedom to Egypt's Salafists — a main target of Mubarak's ruthless security for decades — Abu Bilal led several armed raids on clandestine bunkers where African migrants were tortured and sometimes killed by traffickers. His efforts rescued dozens of victims after months of incarceration and abuse.

"We are now being targeted for what we are, not for committing crimes," said Abu Bilal. "We are not defending anyone responsible for violence and attacks and we will not stand in the way of authorities if they are targeting criminals, but we will never accept the attacks on our villages and houses and stripping us of our freedom just because we are bearded or Salafist."

A few miles away from Mehdeyya, Al-Monitor met with another Salafist member of the Sawarka tribe. Sitting in the garden of his house in the village of Muqataa — another Bedouin stronghold that was targeted by Egyptian military Apaches on Tuesday night — he talked with Al-Monitor on condition of anonymity.

"We rarely leave our villages since the security crisis started in June," he said. "Salafists are hunted and are falsely associated with militancy and attacks, which is an unfair generalization by security authorities who should be protecting innocent people instead of targeting them because of their looks."

While not denying the existence of armed groups in North Sinai, he fiercely rejected the general notion that Bedouin tribes are in cahoots with the militants.

"The military and security forces think that brutality will resolve the crisis in North Sinai, but I guarantee that the crisis will only get more complicated," he continued. "The people gained their freedom and dignity when they sacrificed their lives in January 2011 and revolted against the regime's oppression, and they will never accept it again; people would rather kill and die for their freedom."

In September 2012, during the military’s Operation Eagle — which took place to retaliate for the killing of 16 soldiers at a border checkpoint — dozens of citizens wielded their weapons and chased security forces out of Muqataa during a raid that allegedly ravaged Bedouin houses. Tribesmen saw the raid as a violation on the conservative customs and traditions of their community.

Meanwhile, North Sinai's most prominent Islamist judge, Hamdin Abu Faisal, told Al-Monitor at his Sharia Court in the restive town of Sheikh Zuwayyed that the number of militants will multiply due to the unjust and humiliating measures taken by security authorities.

"Those who renounced violence and made ideological recantations will once again carry arms to defend themselves against the unjust and humiliating security measures," said Abu Faisal. "The policies applied now are actually multiplying the number of oppressed and frustrated people and is putting them under pressure  to become radical militants."

The revered sheikh, who is visited by hundreds of people seeking to resolve their disputes, said that the "ideological recantations made by those who led terrorist attacks in the 1990s were agreements that the state is obliged to honor as well.

"But the return of brutality, smear campaigns and persecution will force even those who acknowledged the recantations to relapse into violence."

Abu Faisal was among several Bedouin community figures who mediated the bloodless release of kidnapped soldier in May, and his Sharia court was among several others that successfully resolved hundreds of disputes that would have otherwise turned into tribal wars due to the absence of security authorities since the January 2011 uprising.

"If we are radical militants, why did the authorities come to our doors and call us for meetings at the security departments to help them impose law and order around our community?" asked Abu Faisal, who complained that the military command and the Ministry of Interior didn’t communicate with tribal and Islamist figures around the volatile North Sinai since the beginning of the crisis in early July.

"If the government thinks that it can contain this deteriorating situation without the endorsement and influence of the community's elders then it is mistaken," said Abu Faisal. "And both the authorities and the people will suffer the repercussions of persecuting a major sector of the community."

Despite the intensifying crackdown and the detention of dozens since the beginning of the security crisis almost two months ago, Abu Faisal's Sharia court in Sheikh Zuwayyed continued to receive people seeking justice from Salafist clerics.

As he spoke to Al-Monitor, he shuffled through the application forms carrying the court's logo while plaintiffs walked in to present their cases.