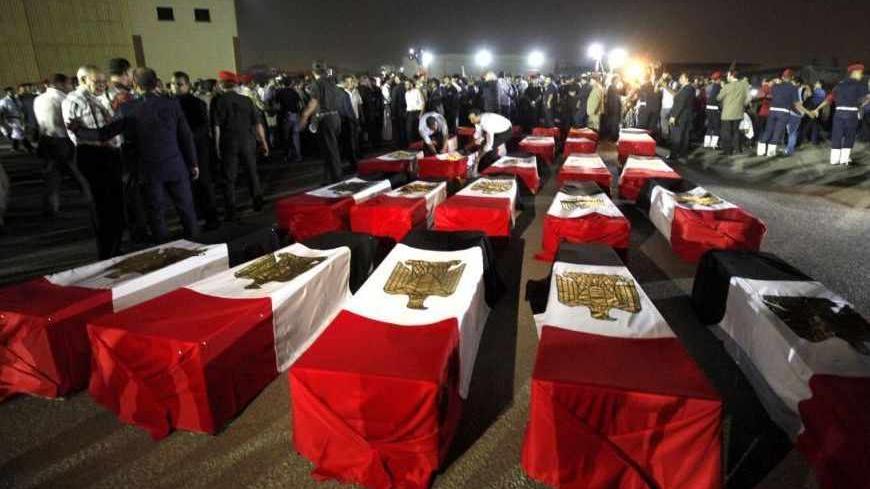 The caskets of 25 policemen killed early Monday morning near the north Sinai town of Rafah lay on the ground after arriving at Almaza military airport in Cairo, Aug. 19, 2013.

CAIRO — On Monday, 28 central security conscripts were pulled out their busses on the highway to their barracks in the border town of Rafah, their hands were tied behind their backs before they were shot from behind, the execution-style operation left 25 dead and three critically injured. The assailants fled, and the avalanche of attacks — that kicked off a few hours after Defense Minister Abdel Fattah al-Sisi announced Mohammed Morsi's ouster on July 3 — continued to echo across north Sinai and claim the lives of more military and police personnel.

The attack, which took place a few days after the anniversary of the Rafah massacre that left 16 soldiers dead on Aug. 5, 2012, came as a blow to the repeated official statements affirming the military’s tight grip on the north eastern corner of the Sinai Peninsula that became a haven for armed militants since the January 2011 uprising.

Spotting the conscripts as their busses drove on north Sinai’s highway cutting through the capital El-Arish, stopping them at a deserted point, and executing them in broad day light, demonstrated that the capabilities of such militant groups go far beyond targeting checkpoints and government offices.

A Sinai tribal leader told Al-Monitor that “such an operation means that whoever the militants are, they have undercover agents moving freely in different locations and keeping an eye on everything, moreover, they are capable of communicating in a way that is clearly unknown to the authorities.”

“Spotting a soldier in Sinai is easy, even if they are in plain clothes, it’s a tribal community and those conscripts were all from the Nile Delta cities,” said the source who spoke on condition of anonymity, “but planning, mobilizing and ambushing them with such efficiency shows you how unprepared the security authorities could be at times.

“I blame the authorities as much as the attackers. Whoever is responsible for those poor conscripts should also stand trial and be punished.”

Meanwhile, several prominent tribal figures condemned the bloody attack, but their reaction didn’t go further than condemnation. The spectator seat taken by Bedouin tribes significantly contradicts the mediation roles and collaboration with authorities, which they adopted in recent years, a situation that paved the way for a rising militancy that usually feared the heavily armed tribal authority, and definitely hindered a lot of the state’s efforts.

The effectiveness of collaboration between security authorities and Bedouin tribes has been proven recently. A few tribal leaders have successfully mediated the bloodless release of seven soldiers kidnapped by armed elements on May 16.

“Our role in freeing the soldiers in May was successful because we had the needed connections, power and influence over the kidnappers,” Sheikh Ibrahim Al-Menaei, a kingpin of north Sinai’s massive Sawarka tribe and chief of the Independent Sinai Tribes Union, told Al-Monitor. “It was a different situation and we put all our effort into serving the state and protecting the lives of humans.”

Al-Menaei explained that the situation has differed: “It is not kidnappers carrying a few guns; we are seeing organized groups with countless elements and heavier guns, and no tribe is ready to go to war and sacrifice its men knowing that no one will defend us. It is the state’s job and is definitely out of our capabilities.

“We are currently suffering between militants who bring instability to our towns, and a state that cracks down randomly on everyone, including innocent citizens.”

His theory was backed by a Friday incident when a rocket launcher was targeted from the air as it was ready to fire at Israeli targets from the village of Al-Ajra, south of the town of Sheikh Zuwayyed. The military’s official spokesman, Col. Ahmed Ali, stated that Egypt’s air force had spotted and destroyed the launcher killing four militants, but several Israeli sources insisted that an Israeli drone carried out the attack.

Whether it was an Egyptian Apache or an Israeli drone, the incident had proven that Sinai’s militant groups are capable of transporting rockets freely around the peninsula. And hours later, a statement was published by Ansar Bait Al-Maqdis (Partisans of Jerusalem), a Gaza-based group that claimed responsibility for attacks on the gas pipeline and Israeli border patrols in 2011 and 2012, mourning its elements and threatening more operations.

Egypt’s state-owned newspaper Al-Ahram denied that the rockets were fired from Egypt.

"Egypt owns the capabilities required for knowing who fired the rockets and from which point; based on our radar systems, we confirm that no rockets were launched from inside Egyptian territory,” Maj. Gen. Alaa Ezzedine, head of Egypt's Strategic Centre of the Armed Forces, told Al-Ahram.

Al-Menaei says that the Bedouin tribes cannot lead this war independently if they will ever interfere. “We have offered the government to officially incorporate our youth and men within their security apparatus, and they refused despite our experience and knowledge of the terrain and its security. Several of the Arabian Gulf states have applied such policies in their tribal communities, but Egypt’s Hosni Mubarak, the Supreme Council of the Armed Forces, and Mohammed Morsi have all refused our repetitive calls.”

He insisted that the tribes were never and will not harbor or give refuge to militants. “Some tribesmen are involved in militancy and the authorities know them by name, we disown them and continue to announce our refusal to their wrongdoing, but we are not the state to fight them.”

Al-Menaei told Al-Monitor that al-Qaeda-linked elements are operating in Sinai, locals and foreigners. “But the information we have never exceeded this, do you think they come and introduce themselves to tribal leaders before they start their operations? If the state with all its power and institutions continues to hunt them across the country, how do they expect us, ordinary citizens, to find, fight and defeat them?”