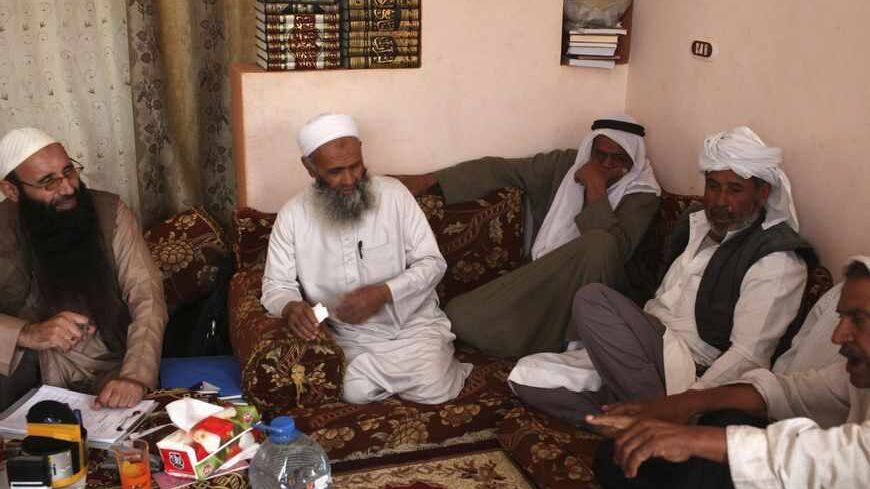 SINAI — A call by President Mohammed Morsi on the Bedouin tribes of Egypt’s Sinai Peninsula to surrender their weapons was met with strident refusal and lots of jeering. The burgeoning security crisis the mountainous terrain continues to face made the tribesmen keener on keeping their weapons locked, loaded, and at hand.

President Morsi made his call after the release of seven security personnel abducted on May 16 by armed militants in the northeastern corner of Sinai near the Gaza border. But that release was mainly a fruit of mediations by the heavily armed leaders of the Menaei clan, the most feared sub-family of the 70,000-member Sawarka tribe, whose authority extends over hundreds of miles between the coastal Rafah and El-Arish and all the way south to Al-Hasana in Middle Sinai.

“Are you [Morsi] going to secure Sinai if we hand over our guns?” asked Sheikh Ahmed El-Herish, the revered kingpin of the Qararsha tribe who single-handedly ordered a total blockade of the southern half of the peninsula four times since the January 2011 uprising, three times when government officials begged for his efforts to release kidnapped tourists, and once when two members of his tribe were shot dead at a police checkpoint.

“It was the tribal firepower, authority, and self restraint that released the soldiers and the tourists without any losses. And that call reflects the crippled mentality behind those who think that surrendering guns would stabilize Sinai,” said El-Herish.

Sitting in the shade of an olive grove in St. Catherine’s, El-Herish told Al-Monitor that Bedouin tribes have yielded weapons since their arrival in Sinai 2000 years ago, when four wheelers were well-bred horses and machine guns were swords and daggers.

“It was never for aggression and crime, never against the government; it was always for security and justice. Security for places like this monastery that demanded our protection and we committed to it centuries ago,” El-Herish pointed at St. Catherine’s Monastery a few hundred yards from where he sat.

Al-Qararsha, El-Herish’s massive Sunni Muslim tribe that controls the Valley of Firan, is responsible for the security of several Orthodox monasteries and churches in their mountainous enclave. Al-Jebaleyya, a neighboring tribe, moved from Upper Egypt’s desert some 1400 years ago to impose a security perimeter for the St. Catherine’s monastery.

El-Herish and at least a dozen other tribal leaders clearly demonstrate the effectiveness of the Bedouin armed authority in Sinai and highlight the failure of security departments in handling the ongoing crisis. Those tribal Sheikhs who Morsi called to surrender their weapons are the same community figures whose efforts he requires to maintain security.

“Those are compromises that exist in every country,” a Sinai security official told Al-Monitor on condition of anonymity. “The relationship, and sometimes cooperation with such armed elements will never be publicly acknowledged but it will continue to exist as long as security is unstable.”

Other tribal leaders have proposed the integration of Sinai’s armed Bedouin authorities within the state’s security apparatus; their proposal was voiced to both former President Hosni Mubarak and to President Morsi’s government.

“They are already using our arms and respected authority over the community to resolve issues they fail to handle, and we proved ourselves every time we were called for help, but they refuse to officially acknowledge us,” said Ahmed Abu Zeina, a respected member of the Sawarka tribe.

Abu Zeina believes that building a Bedouin battalion within the lines of the Interior Ministry’s police force and the military will accomplish what no government was capable of in the history of Egypt.

“You will see disciplined officers satisfying the community with their knowledge of the local culture and imposing security with their experience with the terrain and the tribal conflict resolution issues that they committed to for decades,” said Abu Zeina. “All of what we do now in closed rooms will be done officially in government departments.”

Meanwhile, several of the tribal speakers rejected the surrender of weapons and any other form of cooperation with the government until a number of demands are met.

“I haven’t heard Morsi speaking of land ownership as much as he spoke of turning in our weapons,” said Salem Eneizan, a revered leader of South Sinai’s heavily armed Tarabyn tribe. He was sentenced to more than 130 years in absentia over charges drugs and arms trafficking — charges he claims to be trumped up.

Sinai natives have long been banned from registering the ownership of their lands. All transactions are made with unofficial contracts and any properties could be seized by authorities at any point without prior notice or explanation.

Morsi has passed a law allowing registration of land ownership for anyone who can prove the Egyptian nationality of their parents and grandparents — an impossible condition for a community that lived without government departments for decades. Hundreds of Sinai natives continue to live without national identification cards or passports until today.

In addition, Morsi’s law was interrupted by another which was passed by the military imposing strict limits on sale of lands and real estate under any condition in the 3 miles lining the border between Gaza and Israel, a strip stretching for more than 175 miles between the Mediterranean Rafah and Red Sea’s Taba resort.

“Morsi’s call is a clear reflection of his failure; it shows how ignorant he is of the society’s anger toward consecutive governments and decades of oppression. There will be no cooperation with any government until we claim our most basic rights,” said Eneizan.

“Judging from the performance of security forces and how every crisis is resolved with Bedouin guns and leaders, I think the government should be pleased. At least when someone is kidnapped in Sinai we work on releasing them safely. I believe that one armed Bedouin is more effective than 50 of their police officers.”

The tribal sheikhs unanimously agreed that Sinai’s Bedouins have lost all confidence and hope in Morsi’s government after a year of false promises. Some of them believe that their interference in resolving issues of kidnapping, blocking main roads and absorbing the community’s rising anger is becoming more complicated because of their fellow tribesmen who question their interference in defense of a government that never fulfilled its promises.

“Bedouins will never be satisfied until they are compensated for what they continue to endure, until they taste the wealth of their lands and their God-given freedom that was stolen by the government.”

“Morsi should forget about our weapons until he fulfills his duties toward us,” said Eneizan.

NOTE: On a reporting tour in Sinai over the past week, Sabry met with El-Herish in Middle Sinai’s St. Catherine’s, Ahmed Abu Zeina in North Sinai’s Rafah and with Salem Eneizan in South Sinai’s Nuweiba.