Are tribes in Sinai really unifying against terrorism?

Egyptian media are rushing to claim that tribes in Sinai are fighting terrorism, but the news seems to be premature. 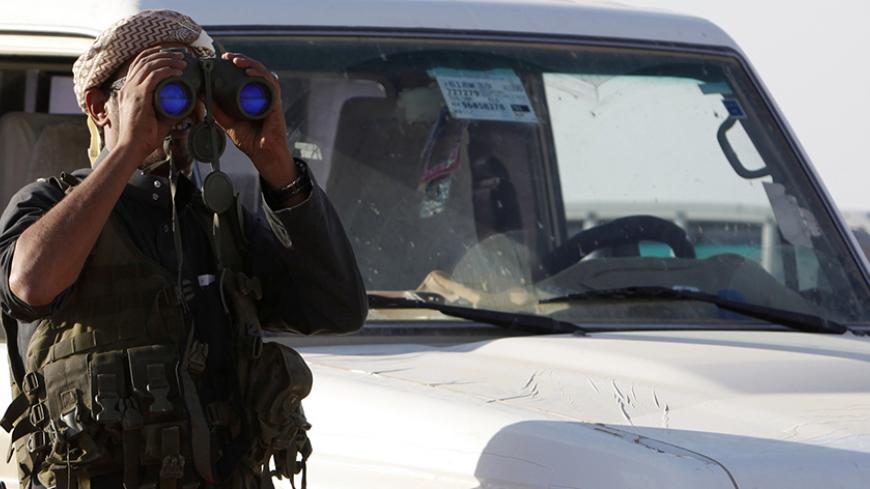 SHEIKH ZUWEID, Egypt — “'The Sinai tribes are fighting terrorism.' This sentence has spread throughout media outlets across the globe, without exaggeration, and perhaps rivals the recently published news about Kim Kardashian’s rear."

It is with these sarcastic words that a prominent member of the Tarabin tribe, which heads what the media has deemed “the alliance with the Egyptian army against terrorism,” responded when Al-Monitor asked about the latest developments in the war on terrorism.

The tribesman, who spoke to Al-Monitor on condition of anonymity, said, “The media have made it seem that there is a fierce war between the tribes and terrorists, yet this is an exaggeration. These media outlets rush to transmit [news] without drawing from the reality in Sinai. This region suffers from unimaginable security restrictions, whether from army forces or from the terrorist organization Ansar Bayt al-Maqdis. Neither side of this quarreling pair wants information to come out that contradicts what each has said to its followers.”

According to on-the-ground accounts obtained by Al-Monitor, the story began when a statement attributed to the Tarabin tribe was published at dawn on April 18, calling for unification among the tribes of the Sinai Peninsula to confront Ansar Bayt al-Maqdis. The statement included a set of names of those leading this initiative. In response, on the evening of April 25, Ansar Bayt al-Maqdis published a statement threatening anyone collaborating with the army against them — whether through words, arms or other means of support, even if moral support. This statement included a call to behead those who had signed the statement published on behalf of the Tarabin tribe.

On the same day Ansar Bayt al-Maqdis published its statement, events developed within the scope of Tarabin tribe members in the Berth region in southern Rafah. A citizen who hails from the tribe, named Al-Astal, refused to accept a copy of the threatening statement. When militants who were authorized to distribute the statement tried to hand him a copy, he said to them, “get out of the Tarabin’s lands” and sped away in his car, the tires throwing sand on the militants, according to the accounts Al-Monitor obtained.

The next morning, on April 26, in the middle of a popular market affiliated with the Tarabin tribe, a group of militants from Ansar Bayt al-Maqdis assassinated Al-Astal for trying to oppose them when they were distributing the statement. That very evening, Ansar Bayt al-Maqdis also blew up the four-story home of Ibrahim al-Argani, one of those who had signed the Tarabin statement, in the village of Tawila in Sheikh Zuweid.

One of the elders of the Tarabin tribe, Jamiaan Abu Masouh, denied that he had signed the Tarabin statement, and published an amending statement on April 18, which read: “Regarding the statement issued in the name of the Tarabin tribe [calling to fight Ansar Bayt al-Maqdis], it is invalid and the names were added to it without my knowledge. The Tarabin tribe is part of the Egyptian people, and Sinai will remain territory linked to the mother nation, regardless of what happens. Anyone who expects otherwise is wrong. The things that are happening in Sinai are happening in all of Egypt’s governorates, and the state is responsible for maintaining security and order. Accordingly, the Tarabin tribe is committed to the laws and the constitution, which preserve security and order, and [we] will not be part of the chaos.”

In the past few days, Egyptian newspapers, such as Veto Gate, have published reports about the outbreak of violent clashes between the Tarabin tribe and Ansar Bayt al-Maqdis, claiming that they resulted in the defeat of terrorism and the terrorists’ withdrawal from southern Rafah. However, a field visit conducted by Al-Monitor to what is called the “square of war” in the media — in Sheikh Zuweid, Rafah and nearby villages — revealed that rumors about a war between the tribes and Ansar Bayt al-Maqdis were untrue. This was according to all the residents Al-Monitor met, who refused to be named in the media fearing the wrath of both the army and the terrorists.

All the people Al-Monitor met with, whether from the Tarabin tribe or other residents of the conflict zone, denied the existence of armed clashes between the tribes and Ansar Bayt al-Maqdis. This begs the questions: Who is issuing the inaccurate statements and information to media outlets? And what is the goal, as well as the entailing results, of the media’s fixation on an alleged tribal war against terrorism in Sinai?

To answer these questions, Al-Monitor spoke to a researcher specializing in Sinai affairs and armed groups. The researcher, speaking on condition of anonymity, said, “Until now, we can say that there is an information war and media altercation between some members of the Tarabin tribe and Ansar Bayt al-Maqdis, but it has not reached the point of armed confrontations.”

Concerning who runs this new scene in the name of the tribes, within the series of conflict between the state and terrorists in Sinai, the researcher said, “We have several readings of the reality. First, the scene is led by a member of the Tarabin tribe who had economic and security influence and lives in Cairo. He also has close ties with military intelligence, President Abdel Fattah al-Sisi and businessmen affiliated with the ruling regime. Second, some of the signatories of the [Tarabin] statement have a long record of entering into armed confrontation. However, the paradox is that this record is of confrontation against the state, represented by resisting the police in the years prior to the January 25 Revolution.”

The researcher added, “So we have a person leading the scene who has a strong relationship with the ruling military regime, and he is assisted by persons in Sinai known for their strength and determination in armed confrontations, and who are fleeing in absentia judgments. The latter are known among Sinai residents as ‘the aggrieved.’ In my personal opinion, and through my readings of this information, we can say that there is an unannounced, implicit agreement between the military regime and these ‘aggrieved’ who have in absentia sentences. Under this agreement, the sentences will be lifted in exchange for them fighting Ansar Bayt al-Maqdis alongside the army. The mediator is the businessman from the Tarabin tribe who is leading the scene from Cairo.”

Is the Tarabin tribe able to defeat terrorism? In this regard, the researcher said, “The Tarabin are among the fiercest fighting tribes and have a history of wars. They are also one of the largest and most widespread tribes in Sinai. However, we cannot say that there is a war between this tribe and Ansar Bayt al-Maqdis, rather there are people from this tribe [fighting the group]. Yet if all unite, they could actually resolve the battle and uproot terrorism — and perhaps with ease.”

He said, “Yet, uniting everyone, and here I mean the tribes, is more difficult than [defeating] terrorism. The primary tribes that must be included in the confrontation are the Sawarka, the Armlet and the Tarabin. These are the tribes that have terrorists present in their areas. No single tribe can confront [the terrorists] alone, rather they must come together to manage control [of the regions]. If this were to happen, it would be very easy to get rid of terrorism. But how can one unify these tribes that have been divided by the state’s practices? The answer to this question is that it requires a true intent for reform from the state, to embrace the people of Sinai. I do not believe such intent exists at all, rather the state is creating more terrorism through its war on terrorism!”

Regarding the future of the tribal conflict with terrorism and possible scenarios, the researcher stated, "The possibility of the tribes uniting at the present moment is very unlikely, for purely ethnic reasons. It is impossible, for example, for the Sawarka tribe to obey instructions from a person from the Tarabin tribe, which heads the media conflict against terrorism. Second, Ansar Bayt al-Maqdis will work in the coming period to assassinate those calling for a confrontation, with the aim of terrifying and dividing citizens out of fear of the masked enemy who slaughters them on the roads. This happened previously when a number of elders from the Sawarka tribe and other tribes who called for confronting Ansar Bayt al-Maqdis were assassinated. This resulted in residents backing away from confrontations, or at least taking fear into account when declaring their public rejection of terrorism.”