Sinai civilians claim they are bearing the brunt of the Egyptian army’s war on terror in the peninsula. 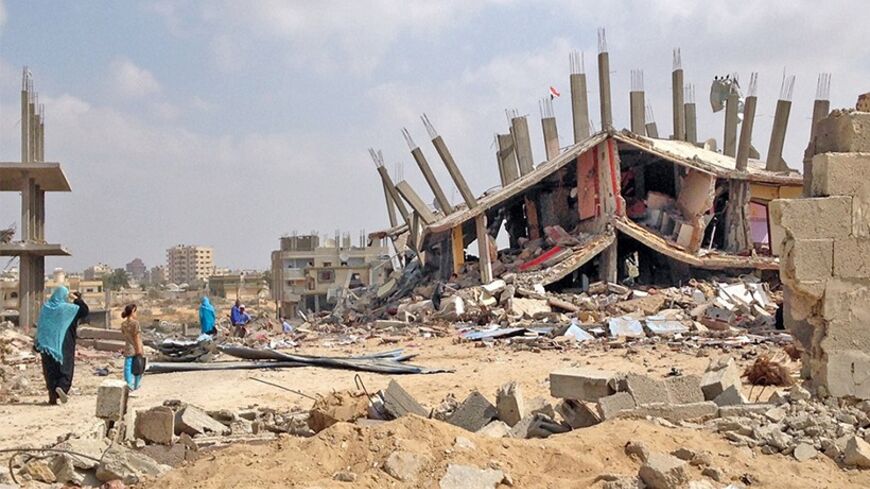 An explosive device was planted under this house by the Corps of Engineers of the Egyptian army during an extensive military campaign that reached the Unknown Soldier Region in Rafah, Oct. 10, 2013 - Al-Monitor

SHEIKH ZUWEID, Egypt — The despair inflicted upon Sinai's residents is rising at a time when the Egyptian government is declaring that it has made gains in its daily fight against terrorism. Residents are complaining of an increase in dangerous abuses and violations of their rights.

Major military operations were launched in the Sinai on Aug. 7, 2013, a month after the ouster of Mohammed Morsi, and have been continuing ever since. Combat troops from the Egyptian army, heavy military vehicles and helicopters are participating in these operations, which allowed the army to enter the Sinai for the first time since the signing of the Camp David Accords between Egypt and Israel in 1979. While this agreement prevents the entry of these forces and heavy vehicles into the Sinai, accommodations between the Egyptians and Israelis allow the suspension of the military stipulations of the agreement until terrorism is eradicated.

Security violations against civilians in the Sinai started as soon as the military campaigns began, said Salama Sawarka, a resident of the town al-Shalaaq, south of Sheikh Zuweid. Salama said governmental offices and banks closed as a result of the daily Internet and phone service cuts. These cuts lasted from eight to 14 hours per day, and coincided with the movements of the military campaigns, he said. This was followed by the uprooting of thousands of olive trees on farms surrounding the international highway from El-Arish to Rafah, which stretches for 50 kilometers (30 miles). Trees were also uprooted along the 15-kilometer (9-mile) road leading to the provincial airport.

"We tried to find out why they had uprooted our trees, but an officer fired bullets above our heads and said: 'Whoever says a word will be considered to be helping the terrorists,'" Salama told Al-Monitor. "Thus we remained silent, despite the fact that these trees have been our only source of livelihood for 40 years, in light of the absence of the state."

Al-Monitor tried to investigate as many facts as possible concerning the violations civilians are subjected to in the Sinai, so we headed toward the regions of the military operations in the villages south of Sheikh Zuweid and Rafah. We traveled in a private car accompanied by a Bedouin driver, who expressed his concern about traveling with us: "If the army saw you we'd be in trouble. … Journalists are forbidden from reporting on the suffering of the people. They previously arrested a journalist here because he was reporting the truth. They tortured him and said he was a terrorist." The driver went silent, then said, "Don't worry. Since the beginning of the military operations we have been using desert bypass roads far away from the checkpoints … because the army closed all the roads to inconvenience us."

The desert bypass road that ends at the villages south of Sheikh Zuweid is characterized by the tracks of military vehicles, and hundreds of uprooted olive trees lay alongside the road. The driver stopped briefly to tell us that these trees, in the village of al-Kharouba, were owned by a fighter who participated alongside the Egyptian army in its wars against Israel. "This man is named Moussa Abu Ruwaishid, and he spent his life in Israeli prisons after he was arrested for his heroic role alongside the Egyptian army in the war to liberate the Sinai. But the army returned the favor by bulldozing his farm," he said.

We arrived to the village of al-Lafitat, south of Sheikh Zuweid, which stands witness to the brutality of the war on terrorism. The village is largely deserted, as many residents migrated after the army struck it with Apache helicopters. In the center of the village stands the two-story health center. Its walls have been shelled by tanks, and in the courtyard is a torched car. The residents said that it belonged to the unit's doctor, who was arrested by the army and accused of treating extremists who had been wounded during the military operations.

Al-Monitor spoke with Suleiman, who declined to provide any more details about his identity. "We thought that the army had come to save us from extremist ideology and terrorism, but we were surprised to discover that they are two sides to the same coin,” he said. "The army came to kill [all] life in our region. Here in the village of al-Lafitat there is no life, even the animals couldn't remain. Apache [helicopters] shelled the village almost daily. Imagine, in one week they bombarded the village with more than a hundred shells."

Suleiman did not deny the presence of armed men in the village of al-Lafitat. "Yes, there were a small number of extremists from the village — fewer than you could count on one hand. They fled when the military operations began, but the army came to attack the peaceful residents and force them to join these [extremists]. … The army is fighting terrorism with terrorism, or even creating terrorism," he said. "In our village, the army's bullets only killed women and children, and they know that the wanted people are not here."

Suleiman said terrorism had not yet begun in the village, and was fuelled by an incident he described as "repugnant."

"On Friday, Sept. 13, 2013, a tank positioned itself in an elevated sandy area and shelled the houses randomly. Most of the residents fled their homes as soon as they heard the sound of tanks, but in one of the homes that had been shelled we found the bodies of a mother and four children who were killed by the shelling," he said. Suleiman then asked: "Will their relatives ever forget this inhumane incident? I believe that the children who see this injustice from the state will one day take up arms against [the army]."

Local activists condemn the security services for the lack of accompanying mechanisms to mitigate the effects of the security campaigns on innocent residents. The door to compensation, as promised by Field Marshal Abdel Fattah al-Sisi in one of his meetings in Cairo, is still closed. Despite the talk of the representative of the Ministry of Agriculture in North Sinai in a news conference, asserting that they had tried to limit the number of crops damaged by the security campaigns, residents said there has not been any attempt to mitigate the effects of the war on terrorism.

The report, whose release coincided with the 32nd anniversary of the liberation of the Sinai, spoke about the military operations' transgressions in the area of "laws and legal principles, which transforms them into crimes against humanity," according to the report. The report also noted that the "war on terrorism" isn't a carte blanche that gives the Egyptian army the right to do whatever it wants without a legal basis. It pointed out that the statements released by the military spokesman themselves have become a "tool to legitimize violations," because they make accusations of extremism, terrorism and danger, without clarifying the legal framework of these claims.

The residents of the Sinai feel that their situation is only getting worse as military operations continue, said Suleiman Hamdan, a resident of Sheikh Zuweid. "For us, nothing is guaranteed from the Egyptian state aside from promises of death and destruction. The more they promise us development and an end to marginalization, the more their indiscriminate bullets are directed at our homes daily,” he said, urging an end to the violence that has racked the peninsula.

"We don't want development in this way. … We just want for us and our children to live in peace."