Over the past few days, the Sinai Tribes Union has issued statements on confrontations between tribesmen and members of the IS-affiliated Sinai Province organization. 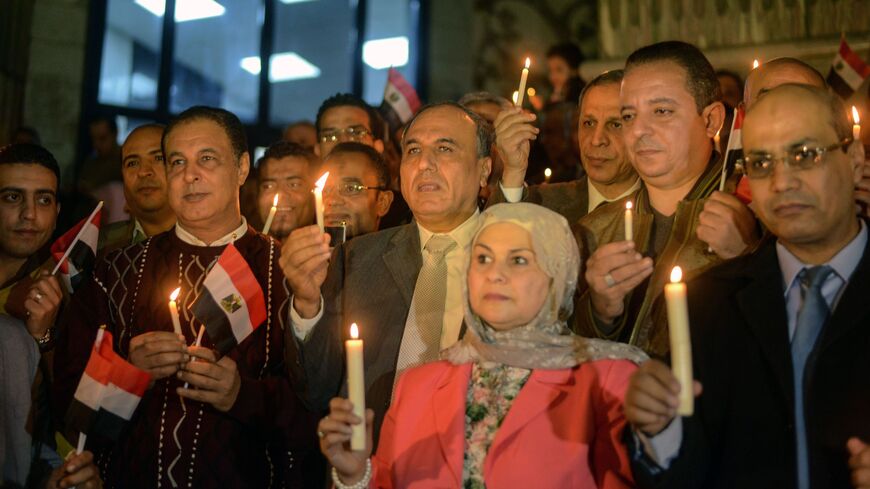 Abdel Mohsen Salama (C), chief of the Egyptian Syndicate of Journalists, speaks to the media as he holds a candle at a vigil in Cairo on Nov. 27, 2017, in the memory of the victims of a bomb and gun assault that left over 300 worshippers killed in the restive province of North Sinai three days earlier. - MOHAMED EL-SHAHED/AFP via Getty Images

Military confrontations against extremist groups in Sinai have expanded to include Sinai tribes as well as the Egyptian army.

On Dec. 18, the Sinai Tribes Union website published pictures of an operation carried out by tribesmen in El-Ajra area, in the south of Rafah, against members of extremist groups. And on Dec. 19, the union's official website published video clips of a clash between tribesmen and two members of jihadi groups in the village of El-Ajra in North Sinai. Both operations resulted in the killing of the jihadi members.

The Sinai Tribes Union operations are running in coordination with the Egyptian army, as the union issued a statement Dec. 1 regarding an operation against what they described as the “dangerous terrorist jihadi leaders … with air and field cover from the Egyptian armed forces.”

The statement added that “dozens of explosive devices prepared for detonation were found along with around a ton of explosive materials, weapons, equipment, wireless communication devices and wires used in terrorist acts.”

According to the Sinai Tribes Union’s Facebook page, the union brings together the vast majority of the Sinai tribes to confront extremist organizations and provide logistical support to the Egyptian Armed Forces in Sinai.

On Dec. 23, Mada Masr reported that “the Sinai Tribes Union is led by the Tarabin tribe, the largest Sinai tribe, and is supported by the armed forces and security services.”

The website added, “The Union launched an extensive campaign against the areas of Sinai Province in the village of El-Ajra, south of Rafah, which resulted in the surrender of one of the organization’s members, the killing of two others, and the destruction of the organization’s positions and vehicles.”

The site stressed that “the military spokesman for the armed forces made no mention of any military operations carried out by the Sinai Tribes Union, be they official or supported, in North Sinai.”

On Dec. 13, North Sinai Governor Mohamed Abdel-Fadil Shousha visited the villages of Sheikh Zuweid without any cover from the armed forces, after a limited return of the residents of the villages, Mada Masr website reported on Dec. 16.

The report stated that “a source in the Sawarka tribe said that the army had armed four to six individuals in each Sinai area to which residents were allowed to return, provided that these individuals handle the protection of residents.”

In mid-November, the report said, the Egyptian army allowed a limited return of residents of the villages of El-Gorah, Al-Daher, and Abu Al-Araj, south of the city of Sheikh Zuweid, which residents had fled about seven years ago in the wake of battles between the army and the Sinai State organization.

On Nov. 21, Egyptian newspaper Al-Shorouk reported that many residents of the village of Abu Al-Araj, south of Sheikh Zuweid in North Sinai, returned to their homes after two years' absence due to confrontations between the Egyptian army and extremist elements.

“Life will completely return to the villages of Sheikh Zuweid within six months,” North Sinai Governor Mohamed Abdel-Fadil Shousha, announced Dec. 13. “We assure every citizen that the villages that have been opened are completely safe."

He stressed that “the return of citizens is one of the state’s top concerns, along with the establishment of infrastructure and the payment of compensation to the people who were recently harmed.”

The mission of the Egyptian army in Sinai now extends to development projects as well as confronting jihadi organizations. An official newspaper published a decision by Egyptian Minister of Defense Mohamed Zaki on Nov. 30 subjecting the National Authority for the Development of the Sinai Peninsula to his authority instead of the prime minister’s.

In a related development, Israeli Deputy Defense Minister Alon Schuster announced on Nov. 16 that the Israel National Mine Action Authority had cleared an area of the Negev Desert near the Egyptian border of mines. Israel had planted these mines due to security concerns about the volatile situation in North Sinai.

“The tribes in Sinai were afraid to report or confront jihadi elements before the Egyptian army announced its intention to cleanse the governorate of terrorism,” said the advisor at the Egyptian Nasser Military Academy, Major General Nasr Salem. But now, he told Al-Monitor, “the state encouraged the tribes to protect their lands and support the Egyptian army after announcing a large number of development projects in Sinai.”

He stressed that “the tribes in Sinai want to achieve stability and cleanse their lands of terrorism in order to accelerate the pace of development projects across the governorate."