Reports have emerged about an agreement between tribal leaders and Egyptian security forces to hand over members of Islamic State in exchange for pardons. 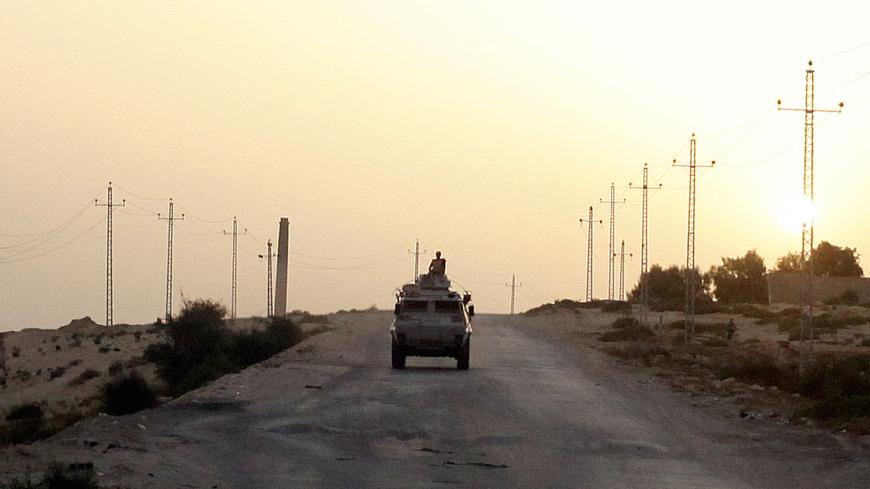 An Egyptian military vehicle is seen on the highway in northern Sinai, Egypt, May 25, 2015. - REUTERS/Asmaa Waguih/File Photo

With the assistance of a large number of local tribal members fighting alongside the Egyptian army, Egyptian authorities have expanded their coordination with the tribes when confronting armed organizations in the Sinai Peninsula.

An agreement was reached in May among tribal elders and sovereign security agencies in which the elders would secure the return of tribal members who were involved with Wilayat Sinai, the Islamic State’s (IS) branch in Sinai, who would then be pardoned upon interrogation.

The Sinai Tribal Union, a group of tribesmen cooperating with Egyptian authorities on security operations in the northern Sinai Peninsula, announced June 7 that one of its members had been brutally murdered by Wilayat Sinai in southern Rafah two months after he was kidnapped.

The union had revealed in late May “the killing of two civilians from the Tarabin tribe during security operations in Sinai [as they fought] members of Wilayat Sinai.”

Adel al-Munaii, of the Sawarka tribe, told Al-Monitor over the phone that after Eid al-Fitr, tribal youths began assisting security services; this led to the escalation of IS attacks on residents of some villages known to cooperate with the army.

Munaii said the military campaign was led by tracking experts from the Sinai Tribal Union. He stressed that the goal of this campaign, whose operations are ongoing, is to besiege the organization's members from the south and the north.

A local resident of Sheikh Zuweid told Al-Monitor on condition of anonymity that participants in this operation are from the Tarabin, Sawarka and Rumailat tribes, in addition to members of several separate families in Sheikh Zuweid and Rafah. The resident said the businessmen who founded the Sinai Tribal Union are funding the campaign and have provided tribes with weapons, vehicles and other necessary support.

Asked about the latest developments in Sinai, Munaii said armed forces operations have achieved a qualitative shift in controlling territory, limiting the movement of foreign elements into Sinai and targeting senior IS leaders. He said this hindered the armed organization's ability to carry out major operations and forced them to resort to sniper attacks while kidnapping citizens or detonating explosive devices.

According to a tribal source who spoke to the Egyptian online newspaper Mada Masr on June 7, the cooperation included the aforementioned agreement between the leaders of these tribes and sovereign security agencies, according to which the tribes would hand their sons involved in the fighting alongside Wilayat Sinai over to the security services in return for their sons being granted amnesty.

The tribal source, who spoke to Mada Masr on condition of anonymity, said 23 members so far have surrendered to security services through mediation by tribal elders mainly from the Sawarka and Rumailat tribes; they were transferred to security headquarters outside Sinai for investigation. The security services had allowed them to see their families as a goodwill gesture, with promises of being released after several months, the source added.

Ahmed Kamel al-Buhairi, a researcher at Al-Ahram Center for Political and Strategic Studies, told Al-Monitor over the phone that cooperation with locals who are represented by tribes and clans is the most efficient way to undermine terrorism in border areas such as Sinai.

He said tribal elders are an important source of information, as they know the rugged, mountainous terrain well.

Buhairi, a specialist in terrorism affairs, said the qualitative shift in the relationship between tribes and the state of Egypt unfolded following the terrorist attack on Al-Rawda Mosque, as the state swiftly developed a plan to care for the local environment, provided a large number of job opportunities in the public sector to citizens and paid substantial compensation to those affected by the operations of the armed forces.

In November 2017, Wilayat Sinai carried out an armed attack in the village of Rawda in the northern Sinai Peninsula when its members stormed the village mosque during the Friday prayers and opened fire on worshippers, killing 311 and wounding 120 others.

Buhairi said the reason the relationship was tense between the tribes and the state is that “the measures taken by the state to establish security have hindered some commercial activities such as smuggling. Also, the residential areas in Sinai have turned into a stage for military operations, and this has affected their herding and cultivation activities, among other economic activities. Add to this that there is a history of a tense relationship between the two sides given the stereotyping promoted in the official media about the inhabitants of the Sinai over the past decades.

Asked about reports of the agreement between tribes and the Egyptian army to secure the return of tribal members affiliated with IS, Buhairi said the experience of reviews conducted by Islamic groups to revise their doctrines was one of the most successful methods in combating terrorism during the 1990s.

He said the state has the right to pardon a person based on a comprehensive assessment conducted by the competent authorities regarding their willingness to cooperate with the state and provide information. Also, he added, this depends on whether such members participated in previous operations.

About 20 years ago, Egypt’s imprisoned Gamaa Islamiya’s leaders issued a series of doctrinal reviews in which they gave up their old ideas and presented new visions, which eventually resulted in the gradual release of some of them.