Egyptian army changes strategy in war against terrorism in Sinai

The Egyptian army has recently made public statements about its operations against militants in the Sinai Peninsula, pointing to a shift in its strategy that had been reliant on local tribes, while refraining from publicly speaking about the battles. 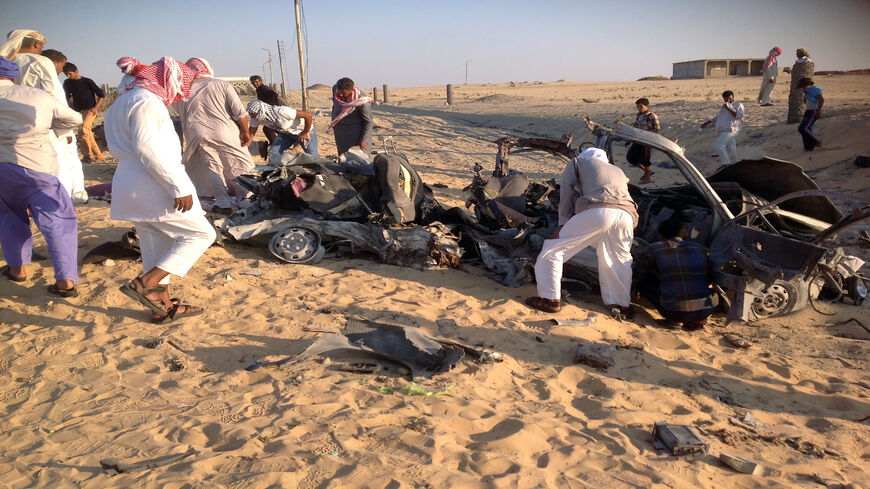 Egyptians gather near a car that exploded after a bomb went off before reaching the intended target, killing three passengers, el-Arish, Sinai Peninsula, July 24, 2013. - -/AFP via Getty Images

The Egyptian army seems to have recently changed its strategy in the face of jihadist groups after armed militants repeatedly attacked the army forces in the Sinai Peninsula over the past few days.

On May 7, the Egyptian army announced that it had thwarted a terrorist attack in western Sinai, which killed an officer and 10 soldiers.

The attack, which was claimed by the Islamic State (IS), prompted the Egyptian army to shift its strategy that had been so far reliant on the role of Sinai tribes in its confrontations against armed groups.

The Egyptian army had been, for years, relying on tribes fighting under the umbrella of the so-called Sinai Tribes Union, in its fight against IS-affiliated Wilayat Sinai.

In a report published on its Facebook page April 7, Mada Masr newspaper said, “The Sinai tribes have become the main player in the war against Wilayat Sinai, as their role on the ground has expanded amid the declining presence of the Egyptian armed forces, which have been providing logistical support and equipment to the new [tribal] groups, as clearly seen in the far east of northern Sinai, specifically in Sheikh Zuweid and Rafah, the birthplace of the organization [Wilayat Sinai]. The armed forces made way for the tribes of the region, most notably the Tarabin, Sawarka and Armilat, as they provided them with weapons and equipment.”

According to the Sinai Tribes Union’s Facebook page, the organization consists of a united tribal front that includes the vast majority of the Sinai tribes with the aim of confronting extremist organizations and providing logistical support to the Egyptian army in Sinai.

In a previous report published on Dec. 23, 2021, Mada Masr had stated, “The Sinai Tribes Union is led by the Tarabin tribe, the largest of the Sinai tribes, and is supported by the armed forces and security services.”

The Egyptian army’s strategy of relying on tribes to ease the burden of confrontations against militant groups faces many challenges. Chief among these is the disputes among tribesmen in Sinai that are fighting Wilayat Sinai.

According to local sources cited by Al-Araby al-Jadeed in February, disputes have emerged among the tribal groups fighting Wilayat Sinai, as each of these groups sought to make gains and get closer to the army forces deployed in the area.

The report stated, “Every tribe in Sinai is seeking to find a separate line of communication with the army forces away from the umbrella of the Sinai Tribes Union headed by Ibrahim al-Arjani.”

Another challenge facing the army’s strategy in Sinai is the multiplicity of tribal entities recently fighting Wilayat Sinai. In another report published March 21, Mada Masr cited local sources as saying, “There are several tribal groups formed to confront Wilayat Sinai, the latest of which is the Sinai Mujahideen Union, which cooperates with the armed forces in the war against armed organizations. Another entity is called Fursan al-Haytham, which includes members of the Armilat tribe, in addition to the Sinai Tribes Union led by Ibrahim al-Arjani, as well as the Hamad Abu Gharqad al-Turbani group that operates in the central Sinai regions under the umbrella of the union. Al-Sawarka is another one of those tribal groups that operates within the villages in the south of Sheikh Zuweid between al-Goura, Abu al-Araj and al-Dhaher, and al-Manadeeb affiliated with the police services operating in the center of Sheikh Zuweid.”

The report added, “Tribal thought is still spread in northern Sinai, as no tribe allows another to enter its areas while carrying weapons, which prompted the tribes to form independent groups of their own members to comb and protect their lands.”

In light of these challenges, more attacks have occurred against the Egyptian military in Sinai. On May 11, a group of armed men attacked a military checkpoint near the city of Rafah, killing five soldiers.

In the face of such challenges and the escalated attacks in Sinai, the Egyptian army is seeking to take back the lead in the confrontations against Wilayat Sinai and again publish statements detailing the direct battles between the army forces and armed militants.

This shift in the army’s strategy came after Egyptian President Abdel Fattah al-Sisi chaired a meeting May 8 of the Supreme Council of the Armed Forces, and called on “the Egyptian army to complete the cleansing of some areas in northern Sinai from terrorist and 'takfirist' [extremist] members.”

On May 11, the military spokesman for the Egyptian army published a statement, saying the army launched “a focused airstrike that resulted in the destruction of a number of terrorist outposts and the killing of nine takfirist members.”

On May 15, the Egyptian army announced that it launched successive strikes to eliminate terrorism in northern Sinai, killing four militants.

However, despite the challenges facing the alliance between the tribes and the Egyptian army, it seems the latter will not let go of the role of the tribes in confronting Wilayat Sinai. The Sinai Tribal Union said in a May 24 statement posted on Twitter, “Under the directions of the armed forces and the supervision of the military and general intelligence, members of the union launched a cleansing operation in al-Faitat village, which is considered the stronghold of terrorist members, and surrounded the village completely. [They also] gradually began storming the village, until the union members succeeded in imposing their full control.”

On May 14, Al-Arabiya News Channel quoted tribal sources as saying that the Egyptian army forces, in cooperation with the Sinai Tribes Union, killed three prominent IS leaders, including Jamil Suleiman Zarei, nicknamed Abu Anas, who was involved in the 2004 bombing that targeted a hotel in Taba and who had escaped from prison in 2011.

Nasr Salem, adviser at the Nasser Higher Military Academy, told Al-Monitor, “It is only normal for the Egyptian army to adopt a flexible strategy in dealing with terrorism based on the data and developments on the ground.”

He said, “The Egyptian army never stopped its battles against Wilayat Sinai, but the army’s [relative] success in eliminating terrorism in Sinai led to a reduction in terrorist attacks.”

He noted, "Tribes in Sinai are a key element in the confrontations against the terrorist organization, especially considering that the Egyptian state is working to develop Sinai and establish development projects there. This encourages the local tribes to cooperate with the army to cleanse Sinai of terrorist outposts and accelerate the pace of development.”