Since the radical Islamic State-affiliate Wilayat Sinai pledged allegiance to the new IS leader Abu al-Hassan al-Hashimi al-Qurashi, it intensified its operations in northern Sinai, where they are confronting local tribes. 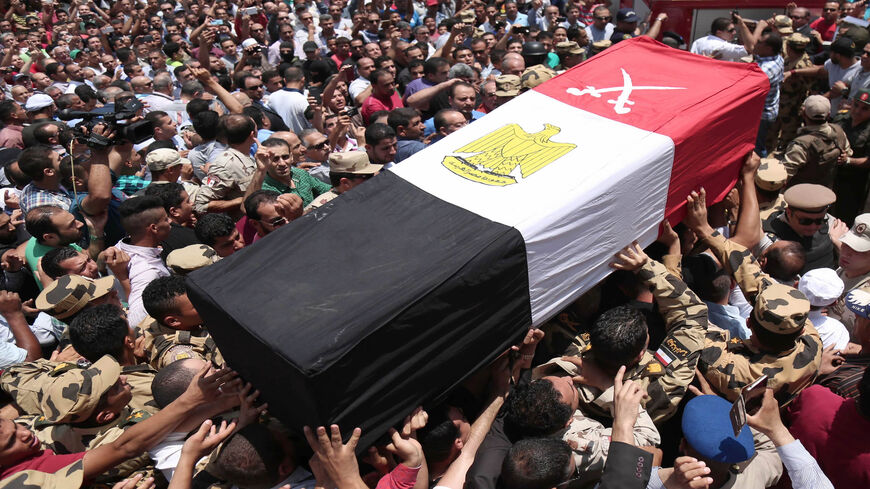 Egyptians carry the coffin of a soldier who was killed a day earlier in the restive Sinai Peninsula in an attack claimed by the Islamic State, during a funeral ceremony in the 10th of Ramadan city, north of Cairo, Egypt, July 8, 2017. - Mahmoud Bakkar/AFP via Getty Images

Egypt’s security authorities are closely following up on the situation in the Sinai Peninsula following the appointment of Abu al-Hassan al-Hashimi al-Qurashi as the Islamic State’s (IS) new commander after IS-affiliate Wilayat Sinai pledged allegiance to the new leader.

On March 17, IS published on its media mouthpiece Amaq photos of Wilayat Sinai militants pledging allegiance to Qurashi.

Wilayat Sinai was previously known as Ansar Bayt al-Maqdis, before pledging allegiance to IS in November 2014, when the organization was led by Abu Bakr al-Baghdadi at the time.

On March 11, Reuters revealed that the new IS leader is the brother of Baghdadi, who was killed in a US raid in northern Syria in 2019.

On March 10, IS confirmed the death of its leader Abu Ibrahim al-Hashimi al-Qurayshi, who is believed to have blown himself up Feb. 3 during a US raid in the border town of Atmeh in northwest Syria.

Meanwhile, Egyptian media has been busy shedding light on IS’ new leader. Al-Bawaba news reported March 10 that the new IS leader is Iraqi and was one of the leading commanders who were close to the IS founder, Baghdadi.

In its March 11 report, Reuters quoted an Iraqi security official as saying that the new leader “is a radical who joined Salafi jihadi groups in 2003 and was known to always accompany Baghdadi as a personal companion and Islamic legal adviser.”

The source noted that Qurashi (the new leader) “has long been head of IS' Shura Council, a leadership group that guides strategy and decides succession when a caliph is killed or captured.”

It seems the appointment of the new IS leader encouraged Wilayat Sinai to step up its attacks in northern Sinai, as Mada Masr confirmed in a report posted on its Facebook page March 22. Quoting a local source, the media outlet said, “Three days after Wilayat Sinai announced its allegiance to the new IS leader, an armed civilian belonging to the Sinai tribes collaborating with the Egyptian army was killed and another one was wounded in a blast south of Sheikh Zuweid.”

The tribes in Sinai have been recently fighting against Wilayat Sinai under the umbrella of the so-called Sinai Tribes Union, at a time the Egyptian army has refrained from publishing any information on its confrontations with the radical organization.

In a report published Dec. 23, 2021, Mada Masr said, “The Sinai Tribes Union, led by the Tarabin tribe, the largest in Sinai, with the support of the armed forces and security services, is engaged in extensive campaigns in the areas where Wilayat Sinai is heavily present.”

It continued, “The armed forces’ military spokesman did not mention [recently] any military operations involving the Sinai Tribes Union, be they official or supported, in northern Sinai.”

According to the union’s Facebook page, the organization consists of a unified tribal front that includes the vast majority of the Sinai tribes with the aim of confronting extremist organizations and providing logistical support to the Egyptian armed forces in Sinai.

On March 22, the Sinai Tribes Union announced the killing of two tribal members during direct clashes with militants in the east of Rafah in northern Sinai, which also led to the killing of three radical elements.

Al-Araby al-Jadeed reported March 14, “Wilayat Sinai launched successive attacks on different parts of northern Sinai in the past 72 hours, which killed and wounded 10 [Egyptian] soldiers and seven members of the tribal groups supporting the army.”

Maher Faraghli, freelance researcher in jihadi movements’ affairs, told Al-Monitor, “The new IS leader is a symbol for Wilayat Sinai members because he is the brother of Abu Bakr al-Baghdadi.”

He said, “The new leader is a leading figure in the organization, and was influential when his brother was its leader.”

Faraghli noted, “The new IS leader and the group’s members are keen to keep up their jihadi operations in Egypt, given Cairo's importance in the region. Therefore, Qurashi may be interested in keeping jihadi operations going in Egypt, but he will face an obstacle, which is the tight Egyptian army’s security and control.”

He said, “In the next stage following Wilayat Sinai’s allegiance to the new IS leader, the organization may entrench its presence in Sinai, by carrying out more armed operations. Wilayat Sinai relies on sporadic and limited operations in light of the tight security and military control. There is no doubt that these operations will not stop, but they are no longer as influential and painful as they were in the past years.”

He explained, “The Sinai Tribes Union’s participation in the fight against Wilayat Sinai has weakened the radical groups, which exploit the mountainous desert nature in Sinai and direct their strikes against the Egyptian army forces. The tribesmen are very familiar with the Sinai environment and are thus able to repel the attacks of the organization.”

Faraghli added, “The Egyptian [army] succeeded in besieging IS in recent years, and Western countries have welcomed the Egyptian army’s success in confronting the attacks of the radical organization and limiting its organizational capabilities.”

In a February report, the UN Security Council praised Egypt’s role in confronting terrorist organizations, and confirmed that “terrorist activity declined drastically in Egypt, especially those led by IS-affiliated Wilayat Sinai in 2019.”