Hamas officials tell Al-Monitor that while Israel inflicted a blow to the tunnel network along the border, their main strategic tunnels are still operational. 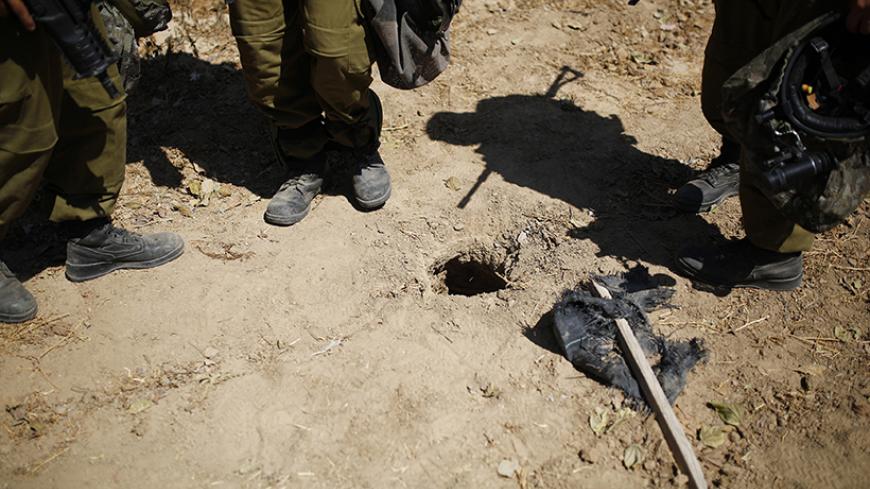 Israeli soldiers stand next to a hole in the ground they suspect is connected to a tunnel, outside the Gaza Strip, Aug. 10, 2014. - REUTERS/Amir Cohen

Hamas’ military wing, the Izz ad-Din al-Qassam Brigades, demonstrated resilience against the Israeli army in the Gaza Strip in the latest war, and their officials say they still have the military capabilities to continue the fight.

The most important phase began during the second week of the war, on July 17, with the ground invasion that resulted in losses for both sides.

The progress of clashes in Gaza and the fierce fighting that ensued between al-Qassam fighters and the Israeli army showed that Hamas possessed a significant fighting capability on the ground. Once battles erupted on the outskirts of the Shajaiya, al-Tuffah, Khuza’a, and Beit Hanoun neighborhoods, the Israelis suffered a number of casualties, with soldiers and officers of elite brigades wounded or killed, armored vehicles destroyed and positions of special forces targeted with rockets, explosives and snipers.

The tunnels were a main strength that Hamas employed against the Israeli army, despite the latter’s preparation for this challenge, and its announcement that targeting those tunnels was one of the objectives of the ongoing war. Israel destroyed a large number of tunnels up until the end of the ground offensive on Aug. 5, particularly those located along the border.

Abu al-Laith, a Hamas military commander, told local reporters that the movement was ready to continue its confrontation with Israel, with thousands of men willing to fight. He said that the al-Qassam Brigades had retained a weapons stockpile in case truce negotiations failed, because “we have prepared ourselves for a long battle, and we can target Israeli cities that were spared during the war, as well as breach the Israeli border again. We possess more rockets than the enemy thinks we do, and we have used only 10% of our available force.”

Al-Qassam field commander Abu Jihad told Al-Monitor, “Israel’s allegations that it destroyed the tunnel network are inaccurate and aimed at local consumption to reassure Israelis that the war was progressing well. To determine the truth, all they have to do is embark on a wide-scale ground offensive in Gaza, for we have prepared a wide array of tunnels 5-25 meters [16-82 feet] deep, which allow our fighters to move about the battleground undetected. It is true that Israel destroyed a number of those tunnels, but the strategic ones are undamaged and have retained their full logistical capacity, in as far as available water supply, food, weapons, ventilation systems and electricity.”

It is interesting to note that, in this war, unlike the previous wars in 2008 and 2012, the al-Qassam Brigades did not divulge the names and numbers of its dead, nor did they allude to them in any way, except through unofficial activist posts and pictures on Facebook. It is well known, however, that they number in the dozens, with medical sources in Gaza confirming to Al-Monitor that corpses in uniform were brought to hospitals.

Al-Monitor also learned from Gaza security sources that rescue workers were still removing the bodies of fighters and those who died when Israel targeted their homes in various areas of Gaza, without any mention of the approximate number of martyrs. Some fighters who went on patrol have yet to return home, because it was only logical that dozens would fall in this confrontation where Israel targeted homes.

Though the exact number of al-Qassam deaths remains unknown, Palestinian estimates indicate that the total number of active fighters ranges between 20,000-30,000, which includes brigades, battalions and units, in similar fashion to regular armies.

Another aspect of Hamas’ military capability relies on its use of rockets, which, in this war, reached all the way to Haifa, northern Israel. In this regard, Hamas official Abu Ali told Al-Monitor, “The al-Qassam Brigades started this war right where it left off in the last war. Shelling Sderot, Ashkelon and Ashdod is now a thing of the past; for this time around, the brigades targeted Tel Aviv, Jerusalem and Haifa, which means that they possess rockets with a range that surprised Israel. Despite the use of the Iron Dome, Israel failed to prevent the paralysis and chaos spreading to more than half of its territory and all of its 5 million inhabitants.”

Abu Ali noted, however, that Hamas faces challenges in producing new rockets due to the siege and destruction of the tunnels on Egypt’s border.

“The al-Qassam Brigades face challenges to manufacture new rockets, because materials used to make and develop them are barred from entering the Gaza Strip, while Israel continues to demand that the whole of Gaza be demilitarized. In this regard, Hamas became aware of the disturbing possibility that Israel would win the game of attrition against its fighters, by extending the confrontation and causing a shortage in available rockets. But the al-Qassam Brigades anticipated this eventuality and began reducing the daily number of rockets fired, while continuing to threaten Israel’s home front.”

But the new development in this war was al-Qassam’s infiltration behind Israeli lines, and its commando unit attack on Ashkelon’s shore positions, 1 kilometer (0.6 mile) north of Gaza’s borders. These operations were unprecedented and proved that Hamas troops had undergone advanced training and used new intelligence measures and tactics premised on the element of surprise against the Israelis.

In response to Israeli measures to counter such operations, Abu Ali said, “Israel’s targeting of border tunnels, its deployment of gunboats along the Gaza coast and its use of surveillance airships and satellites might hinder such operations in the future, if a cease-fire agreement is not reached.”

But Hamas still has tricks up its sleeves, despite their military challenges, Abu Ali said.

“The brigades did not reveal their full weapons and military capabilities; some of which became known as battles against Israel progressed. The longer the fighting extends, the more new weapon systems will be used. As such, the al-Qassam Brigades have made the Israeli army aware that the continuation of the war will be met with further surprises.”