Hamas has developed a sophisticated network of tunnels in the Gaza Strip in the event of an Israeli ground invasion. 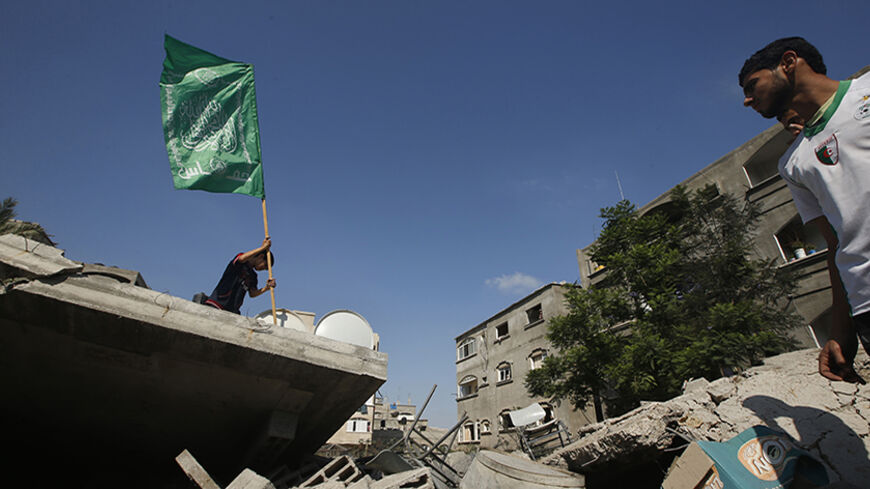 A Palestinian boy places a Hamas flag atop the rubble of a house destroyed in an Israeli air strike in the northern Gaza Strip, July 9, 2014. - REUTERS/Mohammed Salem

GAZA CITY, Gaza Strip — An open military confrontation between Hamas and Israel finally erupted in Gaza July 8, following a gradual escalation that began after the kidnapping and killing of three students near Hebron in June and a Palestinian teenager in East Jerusalem in July. Israel’s killing of six members of the Izz ad-Din al-Qassam Brigades, Hamas’ military wing, in Rafah on July 6 pushed the door open to full-blown warfare, as the Qassam Brigades responded by firing dozens of mortar rounds and Qassam and Grad rockets at southern Israel the evening of July 7 in a manner not seen since the November 2012 war. The Israeli army launched Operation Protective Edge at dawn on July 8.

Al-Monitor conducted a field survey of the sites targeted by the Israeli air force in Gaza and learned from Ashraf al-Qadwa, spokesman for the Ministry of Health, that the strikes to date had led to the deaths of 68 Palestinians, among them 19 children and 10 women, and the wounding of 450 others. These casualties resulted from the targeting of homes in the cities of Rafah, Khan Yunis and Beit Lahiya.

Hamas was quick to respond to the Israeli attack and also issued a number of statements. Mousa Abu Marzouk, deputy head of Hamas' political bureau, issued a release early on on July 8, hours after the war began, saying that preparations for an Israeli attack had been completed after the government called up reserve forces, and its home front was readied. As part of a media campaign, the Qassam Brigades also published a number of communiqués, prominent among them a video showing the local manufacturing of rockets as well as producing images of gunmen carrying rockets, amid raging flames, and a caption that reads in Arabic and Hebrew, “All Israeli cities are close to Gaza.”

Al-Monitor met with a Hamas field commander in Gaza mere hours before the large-scale confrontation erupted. Of this particular weapon, he said, “This rocket is an indication of the high level of professionalism acquired by the Qassam Brigades in their confrontation with the Israeli army. They now possess more devastating and accurate rocket capabilities, including volleys of up to 36 rockets that can be simultaneously launched.” He added, “It is no secret that Hamas took advantage of the periods of calm to expedite its preparations for the ongoing round, when it dug offensive tunnels, manufactured unmanned aircraft and extended the range of its rockets.”

In this regard, the Hamas-affiliated al-Majd Security website affirmed that the Qassam Brigades had undertaken a series of measures to prepare for a long confrontation with Israel, the most important of which were keeping rocket-launch locations secret and building underground storage sites for the launchers. They also adopted the tactic of selecting specific times for launches, such as when aircraft are not flying overhead, as well as deploying decoy launchers to feed the Israeli air force false targeting information.

Al-Monitor reported in February that Hamas had obtained a small number of anti-aircraft missiles, and it has observed in recent days that the majority of Israeli planes in Gazan airspace have released balloons to draw heat-seeking anti-aircraft fire away from the aircraft. The Qassam Brigades claim to have targeted and hit an Israeli Apache helicopter with a SAM-7 missile over Khan Yunis on the afternoon of July 7, but Israeli media claimed the aircraft had avoided damage.

Israel currently appears set to launch a ground offensive, having called up 40,000 reservists to active duty. The Qassam Brigades claim to be ready for such a scenario, which they confronted in the 2008 war. A leaflet circulated among Qassam field commanders, a copy of which Al-Monitor obtained, laid out the steps to be taken in the event of a ground operation, stating, “A ground offensive will be the harshest scenario for both the Qassam Brigades and Israel to deal with, because it will lead to the death of a lot of people. Yet, Qassam’s fighters have reached a level of fighting professionalism that precludes rushing to confront Israeli soldiers as they did before. For now, an analysis of the Israeli enemy’s intentions must first be concluded, with armed cells deployed forward to conduct operations behind enemy lines.”

The leaflet expressed confidence in being able to trap Israeli soldiers entering Gaza. “The Qassam Brigades’ strong point is if Israel decides to launch a ground offensive, it would transform its soldiers from hunters to hunted, sitting ducks caught in a crossfire, as a result of the careful planning, preparations, surveillance, identification of the enemy’s weak points and use of the element of surprise to confound the Israelis and decimate them in gun battles with fighters who would prove their superior fighting ability.”

The dozens of tunnels in Gaza are among the challenges the Israeli army might face should it invade. According to the Hamas field commander, “These tunnels, dug under every street and alley in Gaza, constitute a strength to be exploited by the brigades to exacerbate the Israeli military’s confusion and create security concerns that the army will be unable to deal with. This will lead to a fundamental problem that compels it to modify its rules of engagement with Hamas.”

Hamas' possible use of these tunnels in countering a ground offensive was revealed when Israel bombed a tunnel under the destroyed international airport, leading to the deaths of the six Qassam fighters on July 6. In addition, Hamas’ preparation for the ongoing confrontation may be evidenced by the dispatch of a Qassam Brigades “frogmen” commando unit to Ashkelon, north of Gaza, for an operation during which the commandos were apparently killed. The Qassam Brigades also claim to have detonated an explosion in a tunnel on the evening of July 8 in the Kerem Shalom area, south of Gaza.

Hamas claims its preparations for the ongoing military confrontation with Israel will result in successive surprises on the battlefield. This is perhaps an indication that both sides will attempt to broaden the scope of battle beyond previous confrontations, employing new measures and intensities.