Palestinian armed groups in Gaza are said to possess anti-aircraft missiles, but their capabilities remain limited. 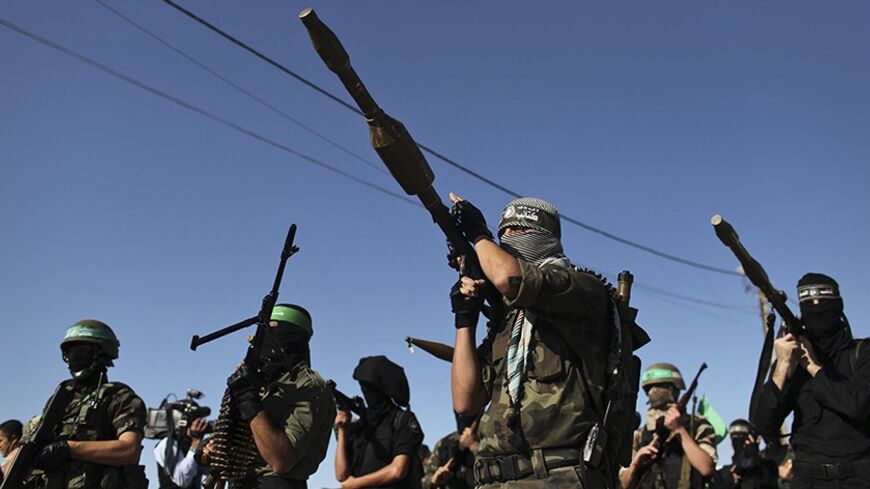 Palestinians in Gaza acknowledge that the Israeli air force has caused problems for them in previous military confrontations — problems that for a long time have remained without adequate resolution. Domination of the skies has afforded Israel a platform for achieving its major objectives, such as assassinations and elimination of weapons emplacements, at minimal cost. The armed factions in Gaza are determined to counter this capability through anti-aircraft missiles and are now in possession of a few versions, although in limited quantities.

Palestinian fighters have tried to evade the wrath of Israeli aircraft in recent encounters by taking the utmost care and caution in their movements. As previously reported in Al-Monitor, fighters have avoided wired and wireless communications, which through analysis of their voice prints might have been one of the primary reasons for locations being exposed, as was the case in many an assassination.

Furthermore, Al-Monitor determined that a few months ago Palestinians had begun using a tactic by which they covered narrow side streets with long pieces of cloth, blankets, canvases and tarpaulins during Israeli overflights to obscure the vision of surveillance aircraft and prevent them from monitoring their whereabouts and field movements, thus reducing the risk of being targeted.

Israel admitted in 2012 that 10 shoulder-fired Strela anti-aircraft missiles had targeted its warplanes. This development surprised the Israelis and presented them with a new set of challenges. Although none of the planes was damaged, the missile firing denoted a marked enhancement of the military capabilities of Hamas, which remained silent on the matter.

The new development in this regard revolves around information gathered by Al-Monitor from military sources knowledgeable about the situation in Gaza who claimed that in early January 2014, Palestinian fighters had conducted a field test, firing an anti-aircraft missile at an Israeli plane circling above Gaza’s eastern border. The missile missed its target, but the incident went unreported by Israeli newspapers and was only briefly mentioned by pro-Hamas media in Gaza. Israeli media noted that Israel had lodged a formal complaint to the United Nations over rockets fired from Gaza after Ariel Sharon's funeral, which Gaza military sources say was a test of an anti-aircraft missile.

Hamas’ military wing, the Izz ad-Din al-Qassam Brigades, have announced on more than one occasion that their anti-aircraft guns and missiles had achieved a breakthrough that would affect the ability of attack aircraft to maneuver during combat. They claim to have damaged an Israeli helicopter, which was forced to land, and downed an armed surveillance drone. They did not provide dates for these incidents, but circulated YouTube videos of remains of Israeli drones it claims were downed by Hamas anti-aircraft missiles.

In mid-September 2013, the al-Qassam Brigades revealed that their troops in Gaza possessed SA-7 anti-aircraft missiles, which were publicly presented at a military parade attended by this Al-Monitor contributor. Also on display were light machine guns, sniper rifles, RPG anti-tank rockets, as well as heavy weapons mounted on four-wheel-drive vehicles.

Israeli military sources in 2012 attributed the availability of these weapons to the collapse of Moammar Gadhafi's regime in Libya, which led to the flow of massive amounts of sophisticated weapons into Gaza. According to a 2012 Al-Monitor report, approximately 1,000 such missiles went missing from Libya’s military stockpiles. Despite American efforts to locate them, only a few hundred were ever found.

Al-Monitor also learned from military sources in Gaza that anti-aircraft weapons number in the dozens and are dispersed among the main armed factions. The flow of such weapons slowed significantly after Egypt destroyed the smuggling tunnels along its border with Gaza in July 2013. This has constrained Palestinian armed groups from deploying anti-aircraft weapons as often as they would otherwise like, as replacement supplies are few and far between.

Al-Monitor reviewed a military document from the so-called Air Defense Unit of one of Gaza’s factions. It stated that the Israeli air force had greatly contributed to the targeting of dozens of the faction’s members through its ability to monitor their movements. The air force also had thwarted a number of plans during the previous two wars by engaging Palestinian units firing rockets at Israeli settlements or assassinating fighters advancing toward Gaza’s eastern border.

The document, only distributed to members of the unit, which is an element of all the Palestinian factions, went on to say that the unit had endeavored over past years to develop military plans to confront any Israeli invasion of Gaza. They sometimes succeeded, according to the document, in repelling ground incursions, as occurred during the 2008 war on Gaza City’s southern border. The Israeli air force, however, was on the lookout for vanguard Palestinian armed units spearheading the face-off with the Israeli army. The primary objective of acquiring anti-aircraft weapons was to paralyze the air force, but this remains a challenge given the small number of such weapons in Gaza and the difficulty to acquire more due to the destruction of the smuggling tunnels.

In conclusion, the document stated, “As long as the Israeli Air Force is tasked with thwarting all Palestinian plans to defend Gaza from ground invasions, it must be confronted, its air sorties foiled, and an end be put to its round-the-clock concentrated flyovers of Palestinian airspace.”

In this regard, the al-Qassam Brigades affirmed that its Air Defense Unit had begun its operations with limited capabilities, consisting of medium and heavy machine guns. The group claims to have succeeded in posing a real threat to Israeli aircraft, hampering their missions and downing three surveillance blimps in the south and north of Gaza, but did not specify dates of incidents or provide evidence to support its claim.

At a farm in eastern Gaza, a high-ranking field commander told Al-Monitor in an interview, “The resistance [movement] has the right to possess whatever weapons are needed to confront the Israeli war machine. Gaza was transformed into a testing ground for all kinds of rockets, as well as phosphorous, vacuum, and percussion bombs, unleashed by the Israeli air force. The resistance will not give Israel another opportunity to repeat its previous tactics in any new confrontation.”

Despite lacking supplies for a sustained anti-aircraft response, the field commander [claimed that] Palestinians can [now] take the fight to the skies. “I can say that the era when the Israeli air force had the initiative, and when it felt that Gaza’s airspace was wide open for its planes, drones, helicopters and F-16s to freely maneuver north and south, is long gone and will never return.”